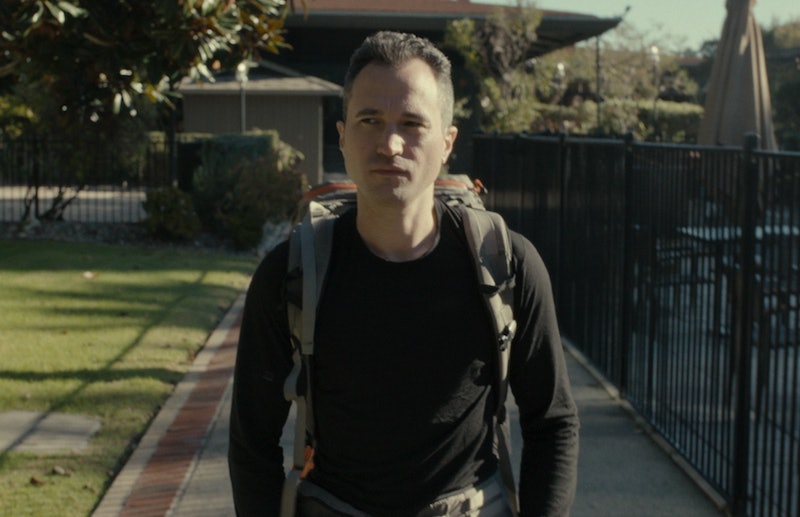 Technology has often been used to deceive and misinform the general public, as Netflix’s true crime anthology Web of Make Believe: Death, Lies and the Internet clearly points out. While early episodes explore what “swatting” is and the tragic murder of a political staffer, the final two episodes of the series revolve around Daniel Rigmaiden, who schemed to defraud the Internal Revenue Service but ended up stumbling onto secret surveillance tech that law enforcement agencies were using to spy on people’s cellphones. “I never really wanted to commit crimes,” Rigmaiden explains in Episode 5. “The crimes were a necessary evil to get around a system I didn’t believe in.”

Rigmaiden grew up in Monterey, California, and as he explained to TakePart in 2016, he “decided not to participate in society after I graduated high school because I was upset about the whole government machine. The whole thing felt like a sham.” After graduating in 1999, he began living off the grid by using fake IDs and constantly moving from town to town. He also began filing tax returns for deceased people, pocketing hundreds of thousands of dollars. He lived like this for nearly ten years, but in 2008, he was arrested. Per The Verge, authorities found $117,000, 230 ounces of gold, and 588 ounces of silver, in his home, which he rented under the name Steven Travis Brawner. Rigmaiden was charged with 35 counts of wire fraud, 35 counts of aggravated identity theft, and three other miscellaneous charges.

It bothered Rigmaiden that he was found out. “My apartment wasn’t in my name, and I made sure no one ever followed me back home when I went out. There weren’t any loose ends,” Rigmaiden told TakePart.

The only thing that left him vulnerable was his Verizon AirCard, which didn’t have a GPS chip but could be triangulated to a general area. Still, he was convinced cell towers could never accurately pinpoint the AirCard down to one specific address, so he became convinced that the government had used some sort of secret technology to track the AirCard.

He was right. As the series explores, to track Rigmaiden down, investigators used a cell-site simulator called Stingray. Dubbed an “unconstitutional, all-you-can-eat data buffet” by the Electronic Frontier Foundation, Stingrays hunt for very specific cell phone signals in a broad area. The Stingray poses as a cell phone tower; when the phones federal and local law enforcement are looking for are used, the device relays information, including the caller and their precise location. But the Stingray forces all the cell phones in that area to connect to it, not just the suspect’s — making it a significant breach of privacy.

Business Insider reported people were still unfamiliar with issues around cyber-surveillance in 2008. But by the time of Rigmaiden’s arrest, the Stingray reportedly had been used by numerous enforcement agencies for years, but nobody knew about it because these organizations signed a nondisclosure agreement never to mention the technology’s existence.

With the help of his lawyer, Rigmaiden researched all of this from his jail cell at the Florence Correctional Center in Arizona. He used the jail’s library and eventually made a dossier of his findings about Stingray. He then contacted privacy activist Christopher Soghoian, who passed Rigmaiden’s findings on to the American Civil Liberties Union (ACLU); they wrote an amicus brief supporting Rigmaiden in 2012. Rigmaiden filed a motion to suppress his case, claiming that the use of Stingray violated his Fourth Amendment rights. This motion was denied, but he eventually did get the FBI to admit they had used the technology. And after Soghoian passed Rigmaiden’s dossier on to Wall Street Journal reporter Jennifer Valentino-DeVries, the Stingray became public knowledge.

Rigmaiden ultimately pleaded guilty in April 2014. Although he faced a life sentence based on his 73-count indictment, a plea deal allowed him to walk away with time served (68 months in prison while awaiting trial). He also had to serve three years on probation, complete 100 hours of community service, and forfeit the stolen funds, totaling over $470,000.

Before his sentencing, Rigmaiden apologized to “everyone I’ve impacted,” including “everyone who works and pays taxes in this country," he said, per AZ Central. He added that he used to think tax fraud was a victimless crime. "I know now that's wrong," he said, adding that those funds "could have been used to build a health clinic or repair a bridge."

Today, Daniel Rigmaiden lives in Phoenix, Arizona and consults with the ACLU and other organizations in ongoing litigation against the use of Stingrays. In Web of Make Believe, he says this remains an issue as smartphone use has become ubiquitous. Alongside the ACLU’s Washington state chapter, he helped draft a bill to regulate the use of Stingrays. He also assists journalists looking to write on the topic. Rigmaiden told TakePart in 2016, “As long as the spotlight’s on me, I’m going to try and voice my opinion and change things for the better.”

More like this
Anthony Templet Wants To “Live Normally” After Killing His Father
By Brad Witter
Where Is Charlie Evens Now?
By Morgan Leigh Davies
Here’s What Hunter Moore Is Up To Now
By Arya Roshanian
Meet Charlotte Laws, The Woman Who Helped Take Hunter Moore Down
By Arya Roshanian
Get Even More From Bustle — Sign Up For The Newsletter