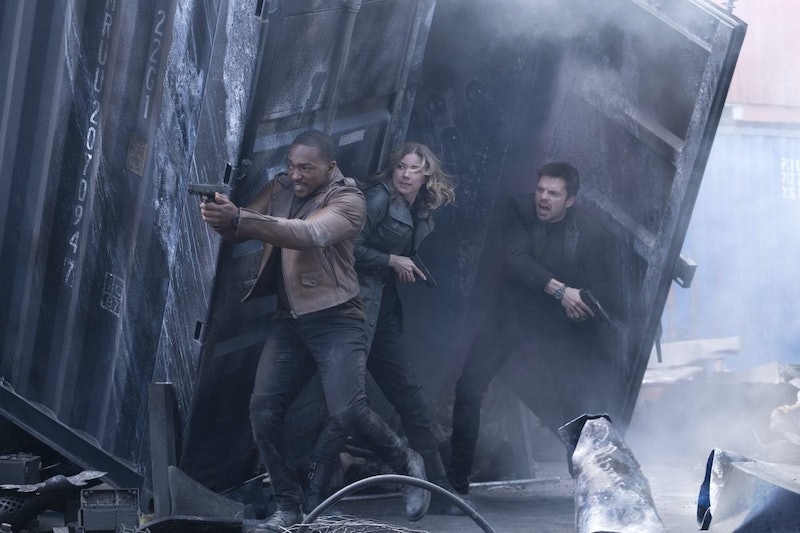 Marvel fans haven’t seen S.H.I.E.L.D. Agent Sharon Carter (Emily VanCamp) since 2016’s Captain America: Civil War. So when the character popped up in the trailer for the new Disney+ series The Falcon and The Winter Soldier, viewers were more than a little surprised. Carter didn’t make an appearance during any of the big battles of Avengers: Infinity War, and in Avengers: Endgame, a photo of her in a montage of the dusted and departed indicated that she disintegrated along with 50% of the planet’s population — but after the reverse snap, she didn’t reappear for final fight. So where has Sharon Carter been since Captain America: Civil War?

Aside from that, she clearly re-manifested after Thanos’ snap was undone, but we still don’t know exactly what she was up to during the events of Infinity War, Endgame, and beyond.

It’s likely that because she helped Cap, Buckie, and Sam escape — and like them, rejected the Sokovia Accords — Carter earned herself a spot on the most-wanted list and had to go into hiding. Way back in 2019, VanCamp told Entertainment Weekly that in the new show, “We’re obviously going to find out where Carter’s been all this time because she’s been on the run.” Of course, fans want to know more — especially since Captain America kissed her at the end of Civil War, and she’s like, his own great-niece through marriage. (“I’m still thinking about that kiss,” Sebastian Stan, who plays the Winter Soldier, told Entertainment Weekly. “Still trying to figure it all out.”)

Carter being on the run seemed to be confirmed last month when, according to The Mary Sue, a timing mix-up may have inadvertently revealed Carter’s whereabouts before Falcon and the Winter Soldier’s premiere. A T-shirt for sale at Hot Topic in February (which has since been taken down from the site) featured a black and white wanted poster of Carter and read “Wanted For Breaking The Sokovia Accords. Trained by S.H.I.E.L.D., presumed dangerous. If seen, contact authorities. DO NOT ATTEMPT TO APPREHEND.”

So it sounds like Carter has been on the lam — much like Cap, Black Widow, and Sam during the events of Infinity War. Still, much about Carter’s recent whereabouts remains unclear, and it’s not yet known how prominently she’ll be featured in Falcon and the Winter Soldier — though her scenes in the trailer involve some pretty intense action sequences. We’ll just have to wait and see how Carter fits into the series. As Carter quips in the preview, “Here we go again, huh?”

More like this
Louisa Harland’s New Show Is A Far Cry From Derry Girls
By Frances Stewart
Spencer Matthews Will Search For His Brother In A New Disney+ Doc
By Darshita Goyal
The 'Andor' Timeline, Explained
By Gretchen Smail
'The Rings Of Power' Episode 7 Will Feature An “Unlikely Pairing Of Characters”
By Grace Wehniainen
Get Even More From Bustle — Sign Up For The Newsletter