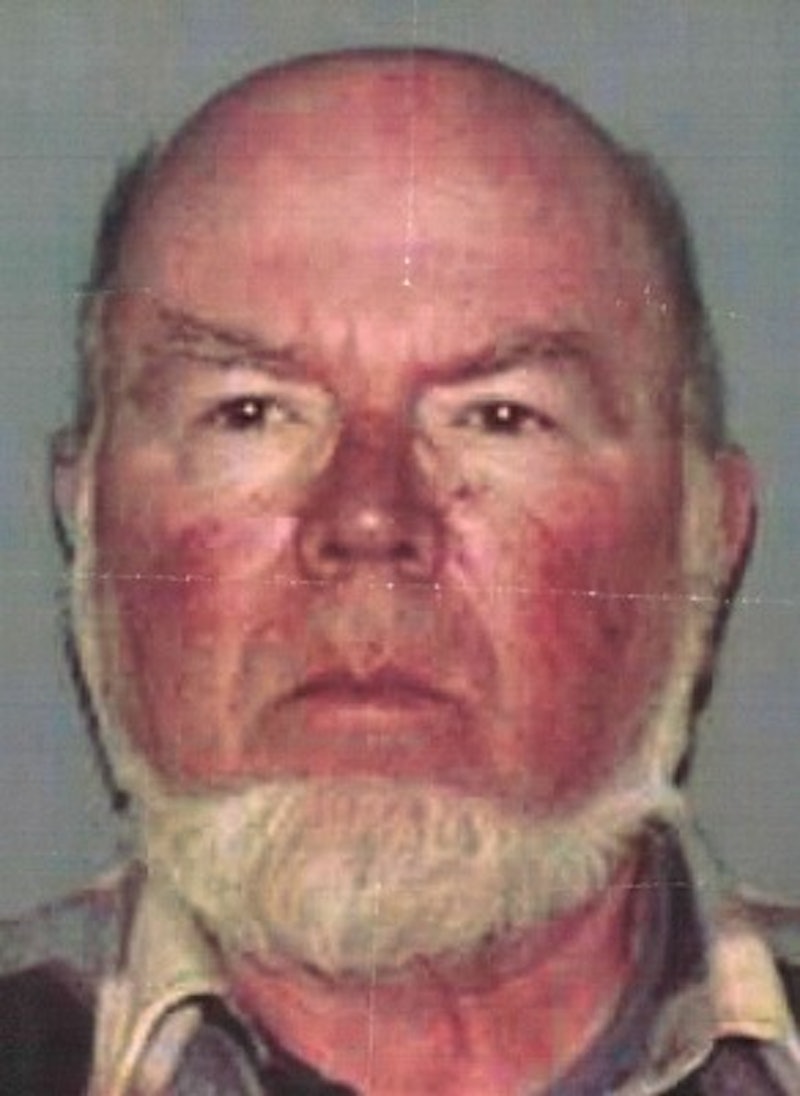 Among the subjects explored in the premiere episode of Fox’s America’s Most Wanted revival is Eugene Palmer, who allegedly shot and killed his daughter-in-law Tammy Palmer in 2012. Though he was charged with second-degree murder for Tammy’s death, Eugene fled before he could be arrested or tried, per ABC 7 New York. To aid in locating him, the FBI issued a warrant for “unlawful flight” in 2013. "That warrant allows our agents all over the United States and the world to investigate, and opens up a vast number of resources to find Eugene Palmer and bring him to justice,” Bill Sweeney, the assistant director-in-charge of the FBI’s New York office, told ABC 7.

To further aid in finding Eugene, the FBI added him to their Top 10 Most Wanted list in May 2019 with a $100,000 reward for information leading to his arrest. Per an FBI report, Palmer was last seen entering New York’s Harriman State Park, where his car was found abandoned following Tammy’s fatal shooting.

According to CNN, Tammy was married to Eugene’s son John Palmer, but the marriage was on shaky ground and Tammy had filed for a restraining order. Family members said that after Tammy threatened to divorce John and sue him for their property, she got into a heated confrontation with Eugene, who actually owned the land. FBI agents believe Eugene then hid in the woods and shot “from a distance” as Tammy returned to her home after dropping her children off at the school bus stop.

Eugene hasn’t been seen since, and according to ABC 7, some of his family members believe he died in the woods after leaving his car behind and hiking on foot. Though Eugene is considered an “experienced woodsman,” his relatives said he had a heart condition, diabetes, and other health issues that wouldn’t have allowed him to live long in the state park. But authorities believe he escaped New York and is still alive, per ABC 7.

If so, Eugene would now be 81, but “his age doesn’t change the level of violence in this crime,” FBI New York Special Agent Andrew Fisher said, per the FBI report. ABC 7 added that he’s considered “armed and dangerous” and is likely living under an alias if he is still alive.

FBI agents hoped that adding Eugene’s name to the Most Wanted list would lead to his arrest. So far it hasn’t, but the additional notoriety from America’s Most Wanted could help. And the FBI remains committed to tracking him down. As Sweeney told ABC 7, “We can't bring back Tammy Palmer, but we hope finding the man who is accused of murdering her will offer some solace to the grieving family.”

More like this
Alleged Cult Leader Larry Ray Is Awaiting Sentencing Following His Conviction
By Brad Witter
Where Is The Bling Ring’s Rachel Lee Now?
By Arya Roshanian
Lori Vallow’s Son Was Arrested For Sexual Assault Days Before 'Sins Of Our Mother' Premiered
By Brad Witter
What Is 'Pretty Wild' Star Tess Taylor Up To Now?
By Morgan Leigh Davies
Get Even More From Bustle — Sign Up For The Newsletter