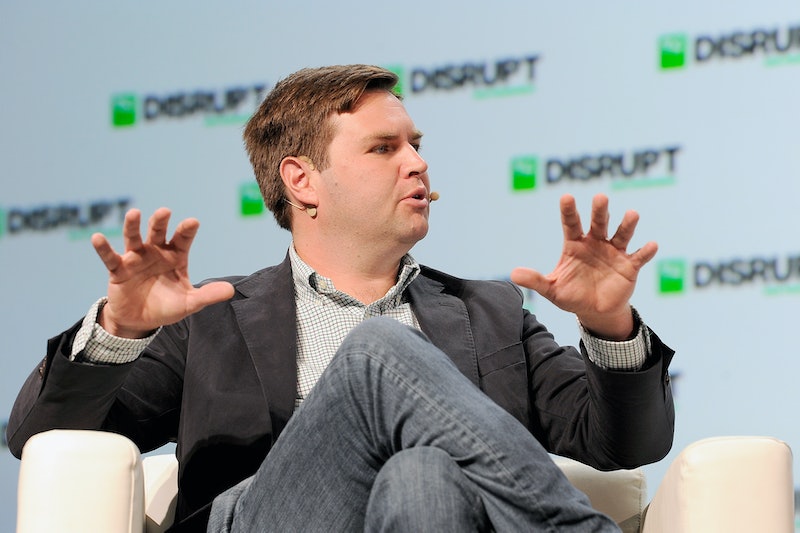 In 2016, debut author J.D. Vance published his memoir, Hillbilly Elegy. The book was an incredible success, offering readers an often overlooked portrait of life in the Rust Belt. And in 2017, Ron Howard's production company purchased the film rights — with Netflix winning a bidding war to finance the movie in a $45 million deal, according to Time.

Hillbilly Elegy focuses mainly on Vance (Gabriel Basso) as he grows up in Middletown, Ohio. It's a tumultuous coming-of-age for him, as he bounces between living with his drug-addicted, tempestuous mother, Bev (Amy Adams), and his grandmother, Mamaw (Glenn Close). The film also tracks Vance as he grows up and leaves Ohio behind to join the Marines and later attend Yale Law School. It's there that he experiences a bit of culture shock, rubbing elbows with the arguably more privileged student body, forcing Vance to finally come to terms with his own upbringing.

In the time since the book's publication, Vance has become a popular conservative commentator. As reported by Decider, he has frequently appeared on Tucker Carlson’s show to discuss Republican ideologies as well as often speaking on CNN, where he's an official contributor. Additionally, the author has penned a series of Op-Eds for the New York Times with titles like, “When It Comes to Baskets, We’re All Deplorable,” “How Trump Won the Troops,” and “A Republican Health Care Fix.” In 2018, Buzzfeed even reported that Vance had taken meetings with Republican leaders in D.C. to explore a possible run for the Senate in Ohio.

But outside of his political work, Vance launched the Cincinnati-based venture capital fund, Narya Capital. In January 2020, Vance raised $93 million for Narya, according to TechCrunch. The outlet also reported that investors in the fund included billionaires like Peter Thiel, Marc Andreessen, Eric Schmidt, and Scott Dorsey.

Vance currently resides in Cincinnati with his wife, Usha, and their two children.