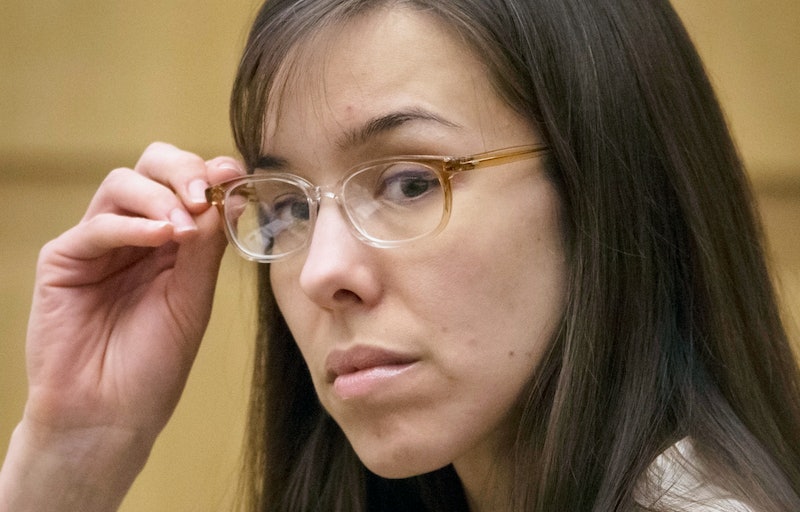 Jodi Arias' case has captivated the public for over a decade. Since her conviction for first-degree murder in the 2008 death of her ex-boyfriend, Arizona salesman Travis Alexander, she's been covered in countless TV specials and documentaries, the most recent of which is Lifetime’s Jodi Arias: Cellmate Secrets. After seven years, Arias is still in prison, where she's serving a life sentence.

As reported by the New York Times, Alexander was found dead in his own home in 2008 with a slit throat, nearly 30 stab wounds, and a gunshot wound to the head. Per ABC News, he and Arias met in September 2006 at a work conference in Las Vegas. The relationship developed quickly, with Arias even deciding to be baptized in the Mormon faith in order to be closer to Alexander. The couple split by 2007, but continued to keep in touch.

After Alexander's death, Arias became the prime suspect in his case. Though she initially denied any involvement, a camera uncovered in Alexander's washing machine revealed photos taken the day of the murder of Arias and Alexander together, Alexander in the shower, and even Alexander's bloody body after the camera had been dropped, per ABC News. A handprint containing both Alexander and Arias' blood was also found at the scene, according to CBS. Arias eventually confessed to the crime, though she claimed she'd been a victim of domestic abuse and killed Alexander in self-defense, per USA Today.

Arias was ultimately convicted in 2013 after two separate juries failed to reach a unanimous decision about the death penalty. Per The New York Daily News, she's currently at the maximum security unit of the Perryville prison for women in Goodyear, Arizona. Before her sentencing, Arias had been housed in the Estrella Jail in Phoenix, where CNN reports that she was kept in her cell for 23 hours of the day.

Over the years, Arias hasn't been shy about communicating with the press from prison. The New York Daily News covered a Jan. 10, 2016 phone call Arias shared with rapper Kareem "Lefty" Williams, who made a bizarre music video defending the convicted murderer. During the call, Arias shared details about her life in Perryville with Williams. "It’s all good. If this is what it is like to be hated, then keep hating,” she shared of her mindset. "I’ve had so much love coming in my direction I can’t even respond to it now.”

Arias complained to Williams about the food in prison during the same call. "On the weekends they give us a hot dinner, on the week days it’s, like, sandwiches," she said, according to the same New York Daily News report. "Nothing is very good. I guess you can compare it to hospital food, because it’s not bad, it’s just not great.”

People reported in September 2017 that Arias had been considering requesting a supervised leave from prison to attend the funeral of her father, William A. Arias, but it appears she never put in the request.

In October 2019, Arias’ lawyers attempted to appeal her conviction, alleging that prosecutor Juan Martinez improperly questioned witnesses, ignored evidence, courted the press, and made unfounded accusations. The state denied the allegations of prosecutorial misconduct, noting that “the evidence of guilt was very strong in [Arias’] case.” However, Martinez was disbarred in July 2020, and Arias’ representative Karen Clark told Fox 10 Phoenix that she can guarantee “that would be an issue that would be raised by a competent criminal appellate lawyer” in the future.

Ultimately, Arias is still serving life without the possibility of parole. What she's doing in 2020 is not unlike what she was in 2019 or what she will do in 2021. She's in prison, and as it stands right now, she's never getting out.

More like this
The Mysterious Gunther Corporation From 'Gunther’s Millions' Has Dissolved
By Brad Witter
A New Netflix Doc Will Explore The Unsolved Murder Of Jill Dando
By Sam Ramsden
Rachel Nickell’s Son Wants The Police To Take Accountability Over Errors
By El Hunt
Yes, Maurizio Mian's Cult In 'Gunther’s Millions' Was About Eugenics
By Gretchen Smail
Get Even More From Bustle — Sign Up For The Newsletter
From hair trends to relationship advice, our daily newsletter has everything you need to sound like a person who’s on TikTok, even if you aren’t.

This article was originally published on Jan. 15, 2018