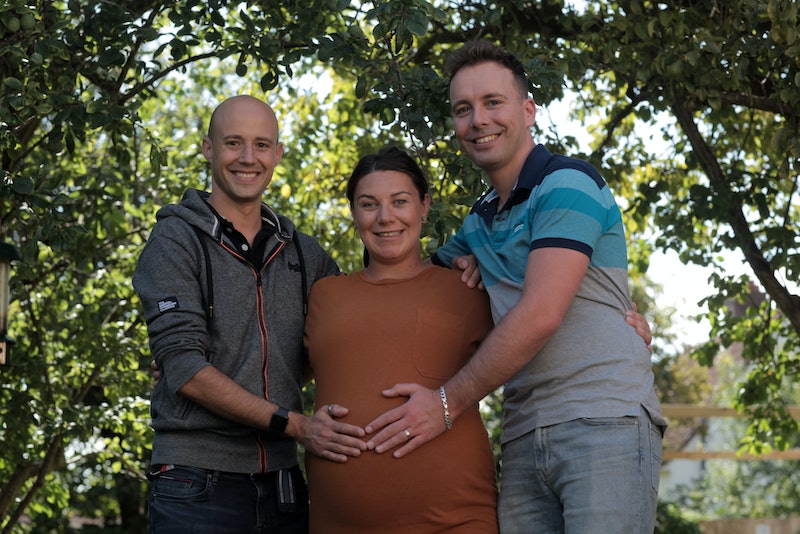 Unless you’ve been through the process, the world of surrogacy can seem pretty mysterious. The number of children born through surrogacy in the UK has tripled in the last three years and BBC Three documentary The Surrogates delved into the realities of this method of having children. Maddie Mawditt is one of women to share her story in the show. But what happened after the cameras stopped rolling? Here’s where Maddie is now.

The 31-year-old single mum of two built a super close bond with the fathers-to-be of the baby she was carrying, Alex and Richard Margerison. And it seems the friendship has stood the test of time. Unlike some of the other surrogates in the documentary, Maddie met Alex and Richard at a surrogate event run by SurrogacyUK.

In an interview with iNews she revealed surrogacy was never something she took lightly. “As I was approaching my 30th birthday, I thought it was a good time to look into it; it was a now-or-never type thing. The more I found out about it, and how it’s done in the UK, the more it seemed like something I really wanted to do.”

In episode three of The Surrogates, Maddie sets herself the goal of getting pregnant within six months. However, when her deadline draws closer it calls into question whether her arrangement with Alex and Richard is fulfilled. It’s hard not to feel for the trio in their fertility journey together. However, Maddie did eventually conceive and gave birth in July 2019 to a baby called Hannah.

The Surrogates doesn’t hide the emotional side of carrying a baby for someone else but Maddie told iNews that the experience was positive for her. “They put her on a towel on my tummy and Alex and Richard were frozen. I grabbed their hands and handed Hannah over. They were crying. I just had this massive grin on my face. We were all on cloud nine.”

In the programme Alex, Richard, and Maddie seemed really close throughout the pregnancy and they’ve continued that since. The trio spoke to iNews about their time on the show and said that while the pandemic has got in the way of their bond somewhat, Maddie is still in touch with the family of three. She revealed that Alex and Richard share pictures and keep her in the loop with video calls.

In the iNews interview, Maddie detailed that one of the reasons their relationship works is that they’re all clear on the role they play in the baby's life. “The way we explained it to my children, which I think is a good way to look at it, is that Hannah is like a cousin. My kids just adore Alex and Richard and easily fell into calling them Uncle Alex and Uncle Richard,” explained Maddie, “We are like one big, happy family.”

You can watch all three episodes of The Surrogates on BBC iPlayer and episode two will be airing on BBC One at 11:45 p.m. on March 24.