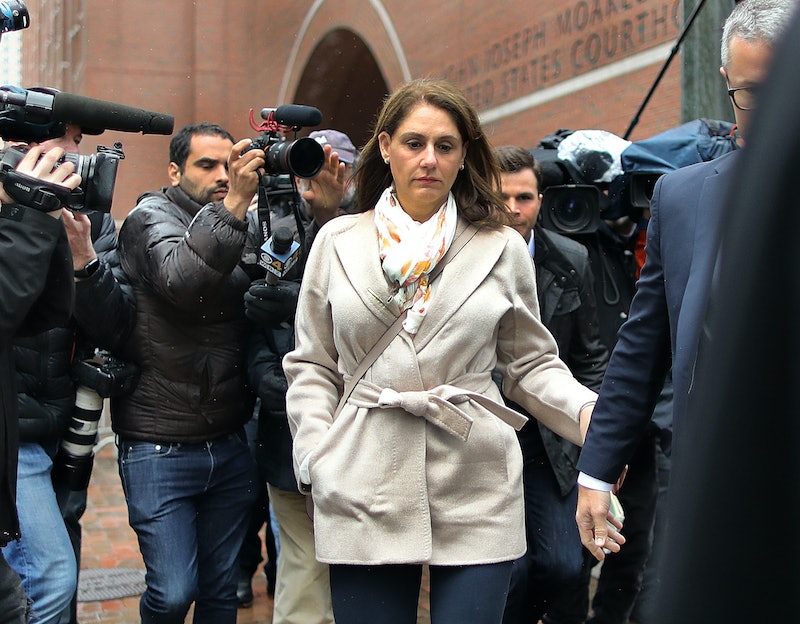 One name that might not stand out to you from the 50 people arrested in March 2019 for their connection to the biggest college admissions scandal ever prosecuted by the Department of Justice: Michelle Janavs. Though she may not be as famous as some of the other 32 parents charged in relation to the Operation Varsity Blues investigation, she wields a ton of influence. That didn’t keep her from paying for her crimes, though. Michelle Janavs served time in prison after being convicted for her involvement in the scheme.

The daughter of Paul Merage, who co-founded Chef America Inc. with his brother and created the Hot Pockets microwaveable mini-calzone, Janavs’ family has a net worth of $4 billion. And in their court battle against her, prosecutors called Janavs one of the “most culpable parents” charged in the whole affair. Whereas some parents paid a few thousand dollars to help boost their child’s test scores through cheating, the Janvases had a more direct involvement in Singer’s scam. The web of conspiracy extended from William “Rick” Singer, the mastermind at the center who had high-rollers “donate” to a phony charity in exchange for getting their kids into elite colleges, to other high-profile figures. Everyone from actresses Felicity Huffman and Lori Laughlin to schools like Georgetown, Stanford, UCLA, and Yale were implicated in one way or another.

Janavs participated in Singer’s scheme for all three of her kids. After her son, Grant, was admitted to Georgetown University in May 2017, a foundation controlled by his grandfather wired $400,000 to the Key Worldwide Foundation, a phony charity Singer founded to cover his tracks. Singer used money from that foundation to pay Georgetown tennis coach Gordon Ernst more than $2.7 million in “consulting fees” over the years, designating applicants like Grant (who had limited tennis experience and allegedly no knowledge of the scheme) as recruits.

Janavs then helped rig her oldest daughter’s admission to the University of Southern California with a $200,000 payment to Singer and some posed volleyball photos (her daughter had played on the junior-varsity team). For her youngest daughter, Janavs paid another $100,000 to boost SAT scores.

Prosecutors recommended a 21-month sentence for Janavs, one of the longest asked for as part of “Operation Varsity Blues.” Ultimately, Janavs was sentenced to five months in prison, a sentence the judge reached after taking in her history of good works over the past 30 years, including supporting the arts and working to combat hunger. She was also ordered to pay a $250,000 fine and faces two years of supervised release from the end of her time in prison.

Her trip to prison was not without consternation, however. By the time Janavs was sentenced, the COVID-19 pandemic was well underway. While her lawyer pushed for her to serve the full five months from her home, the district judge denied her request.

“Although the current public health crisis is not ended, it has abated and will likely to continue to abate over the next few months," Gorton said in denying Janavs' request. "If defendant Janavs prefers to postpone her report [to prison] date until August 31, 2020, the court will so order but it will not convert the sentence imposed to home confinement.”

Ultimately, Janavs entered prison on Aug. 31, but she served just six weeks before being sent for home confinement.

More like this
Jeffrey Dahmer’s Arresting Officer John Balcerzak Got His Job Back After Being Fired
By Grace Wehniainen
Where Is Lionel Dahmer Today? Jeffrey Dahmer’s Father Reflected On The Serial Killer’s Death In 2020
By Brad Witter
Here's What Jeffrey Dahmer's Dad Has Said About His Other Son, David
By Grace Wehniainen
Andrea Arlington, Alexis Neiers Haines’ Mother, Now Works As A Life Coach
By Morgan Leigh Davies
Get Even More From Bustle — Sign Up For The Newsletter