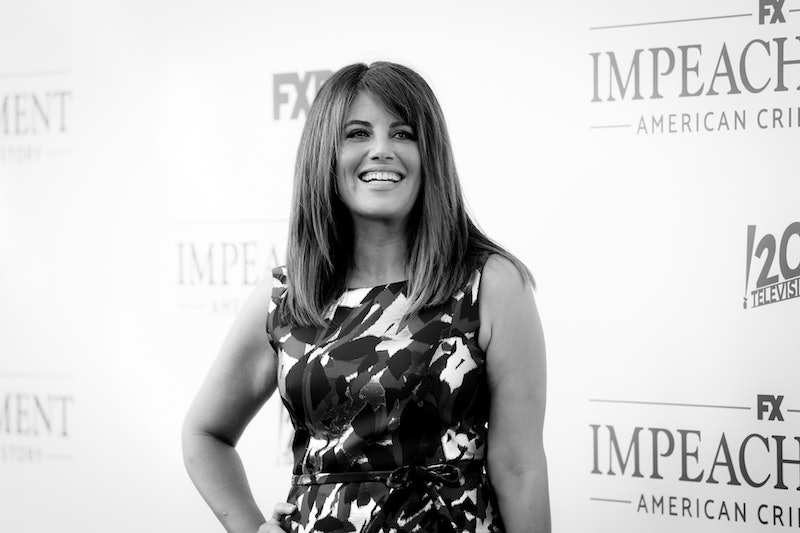 There was a stretch of American history when Monica Lewinsky was one of the most infamous names in the zeitgeist. After news of her affair with then-President Bill Clinton broke, Lewinsky found herself ostracized as the details of her personal life spread like wildfire through news coverage, late-night talk shows, opinion programs, Saturday Night Live, and the newly flourishing world wide web.

Lewinsky said that the attention eventually led to her being diagnosed with post-traumatic stress syndrome. “I’m sorry to say I don’t have a definitive answer yet on the meaning of all of the events that led to the 1998 investigation,” she wrote in a 2018 Vanity Fair op-ed marking the 20th anniversary of the scandal. “I am unpacking and reprocessing what happened to me. Over and over and over again.”

Lewinsky has found a few different career paths in the two decades since. She had a handbag line, was a spokesperson for Jenny Craig, and hosted a dating show before returning to school and getting her Master’s in Psychology from the London School of Economics. Her thesis was titled "In Search of the Impartial Juror: An exploration of the third person effect and pre-trial publicity."

Over the past decade, Lewinsky has also built a career as an anti-bullying advocate. In addition to frequently speaking on the subject (she even joined John Oliver’s show for a segment on public shaming) she’s hosted a TEDTalk called “The Price of Shame,” likening the media coverage and criticism she endured to what we would now call cyberbullying. Lewinsky also worked with Bystander Revolution, an anti-bullying resource founded by Mackenzie Bezos.

She’s also directly involved with American Crime Story: Impeachment, the new season of the FX anthology show. Lewinsky serves as a producer for the project, something that gave star Beanie Feldstein confidence in taking on the role of Monica. (It’s also something producer Ryan Murphy specifically wanted, stating, “I told her, ‘Nobody should tell your story but you, and it’s kind of gross if they do … If you want to produce it with me, I would love that; but you should be the producer and you should make all the goddamn money.'”) According to a fellow producer on Impeachment, it was important to her to have the show depict the “agency” she had in her relationship with Clinton.

It’s just one of the ways Lewinsky is coming to reinterpret her experiences around the Clinton scandal. While she originally wrote in a 2016 Vanity Fair op-ed that she would always believe “it was a consensual relationship,” and that “Any ‘abuse’ came in the aftermath, when I was made a scapegoat in order to protect his powerful position,” she admits she reconsidered that stance after the #MeToo movement gained steam in 2017.

“He was my boss. He was the most powerful man on the planet. He was 27 years my senior, with enough life experience to know better,” she wrote two years later for Vanity Fair. “He was, at the time, at the pinnacle of his career, while I was in my first job out of college.”

Impeachment isn’t the end of her producing career: she’s already signed on with HBO Max to produce a documentary called 15 Minutes of Shame, which will focus on those who found themselves caught up in the world of public criticism and humiliation.

All in all, Lewinsky seems to have found a way to build on the worst period of her life, going from being what she called “the most humiliated person in the world” to an activist who can joke about her past on Twitter.

More like this
Pamela Anderson's Sons Brandon & Dylan Have Their Own Hollywood Careers
By Arya Roshanian
Wait, Is Barney Stinson Related To Sophie On 'HIMYF'?
By Gretchen Smail
Pamela Anderson’s Dating & Marriage History Could Be Its Own TV Series
By Jake Viswanath
You Might Want To Rewatch This Key 'On My Block' Scene To Understand 'Freeridge'
By Grace Wehniainen
Get Even More From Bustle — Sign Up For The Newsletter
From hair trends to relationship advice, our daily newsletter has everything you need to sound like a person who’s on TikTok, even if you aren’t.