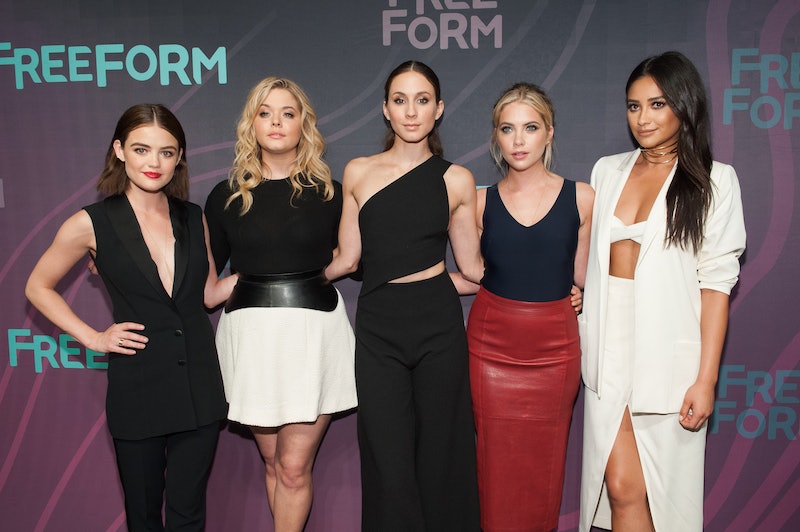 When Pretty Little Liars aired on Freeform in 2010, it made stars out of Lucy Hale, Ashley Benson, Shay Mitchell, Troian Bellisario, and Sasha Pieterse. Based on the books by Sara Shepard, the cast played high schoolers in Rosewood who were constantly tormented by “A,” their mysterious blackmailer who seemed to know all their secrets, throughout the show’s six season-run. On July 28, HBO Max is introducing a new group of Liars, a new town, and a whole new “A” with the reboot PLL: Original Sin. Since the project was announced, it seems that the original Rosewood alums have been nothing but supportive of the new cast.

“Lucy has been one of the biggest blessings to have by my side as I started this next chapter,” Bailee Madison tells Bustle. Madison plays Imogen Adams, one of the new Liars who is pregnant on the show. “I always kinda knew that I had her to turn to and she was very clear I always had a friend there to lean on,” she continues to gush about Hale. “She’s experienced the height of this whereas we’re just pivoting, working our way through it. But her support, advice, and friendship at the end of the day, means the absolute world. I’ve admired and looked up to her for as long as I can remember.” Hale, who also worked with one-half of Original Sin’s creators Roberto Aguirre-Sacasa, even attended the screening of the new HBO series.

But Hale isn’t the only Rosewood Liar who’s been supportive. Madison adds, “I remember being very nervous with the announcement coming out as an original fan myself, I just didn’t know what to expect with the reaction. And Shay, Troian, and Ashley, and all the girls have kinda entered my life throughout the years and situations, and have always been so graceful and lovely.” Their support “meant so much,” she says.

Another one of HBO’s new leads, Chandler Kinney, agrees. “Everyone has been so supportive which really means the world,” Kinney, who plays aspiring director Tabby, tells Bustle. “Coming into this universe, it’s definitely a bit nerve-wracking. You feel the weight of the responsibility. You wanna do the story justice and you wanna bring these characters to life and hopefully encapsulate what was so special about the OG but in no way try to recreate [it] and they’ve all been so supportive.” She even says that the books’ author has also been “very excited for us.” It’s “really, really wonderful and special to have that,” she adds.

With a new set of Liars poised to cement their status as young stars just like the original cast, here’s a look back at where the original Liars were then and now.

Hale charmed audiences as the doe-eyed Aria Montgomery, whose main conflict was that she was a high school student... involved with her English teacher Ezra Fitz (Ian Harding). Prior to the show, she’s appeared in several shows like Privileged and How I Met Your Mother, and made her film debut in The Sisterhood of the Traveling Pants 2.

Since her big break as Aria, Original Sin’s creator cast Hale as the titular lead in Katy Keene, the Riverdale spinoff based on the Archie comic series. She also appeared on Riverdale as Katy in a couple of crossover episodes. Hale has mostly been working on TV shows including Life Sentence and Ragdoll, but also starred in the occasional film project like the horror film Truth or Dare. Hale will be starring in the upcoming film Gemini Lounge next, where she plays the female lead, Gina.

Emily Fields’ character on PLL was iconic — and not just because she kept making it out alive at the hands of the Big Bad “A.” She was one of the openly lesbian teen characters on TV at the time, whose arc from Season 1 to 6 involved coming to terms with her sexuality and owning her identity. After the show wrapped, Mitchell spoke to Huffington Post in 2017 about being an LGBTQ+ icon and said it was “the best part” of working on PLL. “I’ve had guys and girls come up to me and say, ‘Thanks to your character, I came out to my friends and family.’ That means more to me than anything.”

Since her turn as Emily, Mitchell has probably been the most visible out of the original Liars, working on hit shows like Netflix’s wildly popular serial-stalker series, You (though her character met her demise at the hands of Penn Badgley in the first season.) She then moved on to Hulu’s Dollface, starring alongside Kat Dennings and Brenda Song. To celebrate her Filipino roots, she also took on the voice of the titular lead in a Philippine-based-comic-turned-Netflix series Trese.

Perhaps the biggest change in Mitchell’s life since playing Emily was becoming a mom of her own (just like her character!). She’s given birth to two girls, Atlas and Rome, and became the go-to for expecting moms for her maternity style.

Benson already had brushes with cult teen shows and films, appearing in shows like The OC and 7th Heaven, and the Bring It On franchise, even before playing the popular Hanna Marin in PLL. She reprised her role as Hanna for two episodes of the PLL spinoff Ravenswood.

Like Hale, she also guest-starred on How I Met Your Mother as Barney’s (Neil Patrick Harris) half-sister who briefly dates Ted (Josh Radnor). And since her PLL stint, she starred in the 2018 film Her Smell, and, in the past few years, went back to working on thrillers including The Birthday Cake and Private Property, a remake of the 1960 original.

Bellisario grew up in showbusiness. Her father, Donald Bellisario, is a longtime producer of crime shows like NCIS and Magnum PI, while her mom, Deborah Pratt, is a four-time Emmy nominated actor whose shows include the uber-popular Grey’s Anatomy. She’s even worked with her parents at some point as a teen: with her dad as a guest on NCIS, and with her mom in two episodes of Quantum Leap.

So it shouldn’t have been a surprise that Bellisario nailed her role as the quick-witted Liar Spencer Hastings. The most academically-inclined member of the group also took uncovering their tormentor’s identity upon herself. So much so that she became a part of A’s Army at one point.

In December 2016, a few months shy of the show ending, Bellisario married her longtime boyfriend, Patrick J. Adams. (If he sounds familiar, that’s because he was on another hit show, Suits.) Two years later, the couple welcomed their first child.

Since working on PLL, Bellisario has been advocating for mental health and speaks out against unrealistic body standards. She even wrote and starred in the movie Feed, inspired by her own eating disorder. She’s also since starred in films including Where’d You Go Bernadette and Doula, but seems to work on a lot of passion projects including several shorts that she’s written, directed, and starred in herself, or co-written with her husband.

Say you want about Rosewood’s resident mean girl, but Pieterse nailed her portrayal of Alison DiLaurentis. On the show, Alison starts out by playing an extremely elaborate (and cruel) prank on her friends, then tormenting them as A for one season. But in later years, the PLL fandom got to see a softer, kinder side to Alison, and fans even got to ship her and Emily, aka Emison.

In real life, Pieterse couldn’t be farther from her onscreen character. For one, Pieterse’s idea of competitive fun doesn’t involve SMS blackmail. Instead, she joined Season 25 of Dancing With The Stars in 2017 but was sadly eliminated after just a few weeks. In 2019, Pieterse reprised her role as Alison in PLL’s second spinoff: The Perfectionists. Other than the PLL franchise, Pieterse starred in the film The Honor List and appeared on two episodes of Epic Night.

As to her romantic life, she married author Hudson Sheaffer in 2018 after a few years of dating, and in 2020, she gave birth to his son, Hendrix. She’s been spending her days as a mom — with a dedicated Instagram account for her son.