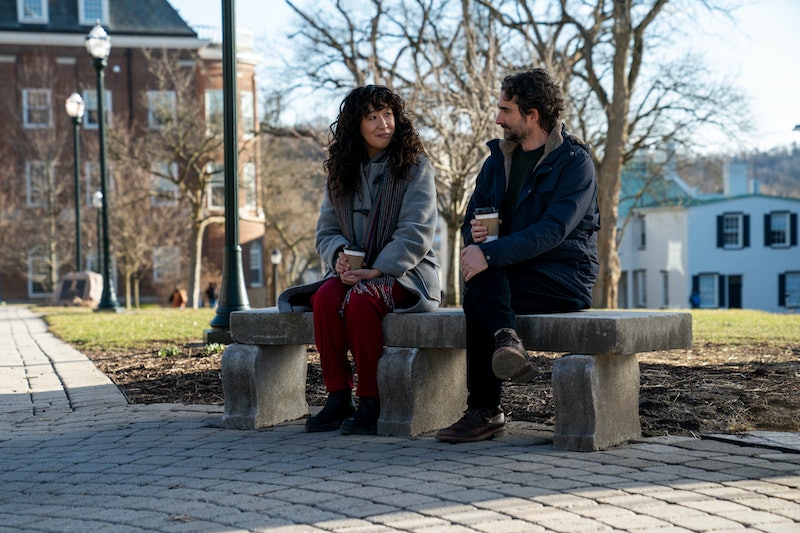 If The Chair feels like it covers too much ground for any one school, you’d be right: the Netflix miniseries, which follows the trials and tribulations of a newly anointed chair at a university’s struggling English department, was filmed across several scenic college campuses in Pennsylvania.

According to Atlas of Wonders, many of the scenes and establishing shots were filmed at Washington and Jefferson College in Washington, Pennsylvania. You can catch a glimpse of the Jesse W. Lazear Hall on the left side of the screen in the final episode, as the camera pulls back on Joon-Yi (Sandra Oh) sitting in a courtyard. If the campus looks familiar to you, it’s probably because this isn’t the first Netflix show filmed there: David Fincher’s psychological crime thriller Mindhunter featured the location as well.

Much of The Chair was also shot in Pittsburgh, Pennsylvania, about 30 minutes away. And while it may seem like Pembroke is all set in the same place, the campus shots were split between Washington and Jefferson and Chatham University’s Shadyside campus. That includes critical campus spots like the Jennie King Mellon Library and the Chatham Quad (pictured throughout the show covered in snow). Pittsburgh’s Shadyside neighborhood (which surrounds the Chatham campus the series shot near) stood in for the quaint, unnamed university town that Joon-Yi and her colleagues live in.

All together, The Chair captures a classic, Ivy League campus feeling while eliding any parallels to a specific school. Which feels right for the ubiquitous nature of the issues discussed in the series: though the fictional Pembroke University’s elite pedigree is often discussed, the many conflicts facing the English department are universal and could be found at any university.

More like this
When Was 'Bling Empire: New York' Filmed?
By Karen Fratti
You Might Want To Rewatch This Key 'On My Block' Scene To Understand 'Freeridge'
By Grace Wehniainen
The 'Freeridge' Cast Shared Their Hopes For A Potential Season 2
By Grace Wehniainen
Ashton Kutcher Wants Danny Masterson “To Be Found Innocent” In Rape Retrial
By Jake Viswanath
Get Even More From Bustle — Sign Up For The Newsletter
From hair trends to relationship advice, our daily newsletter has everything you need to sound like a person who’s on TikTok, even if you aren’t.