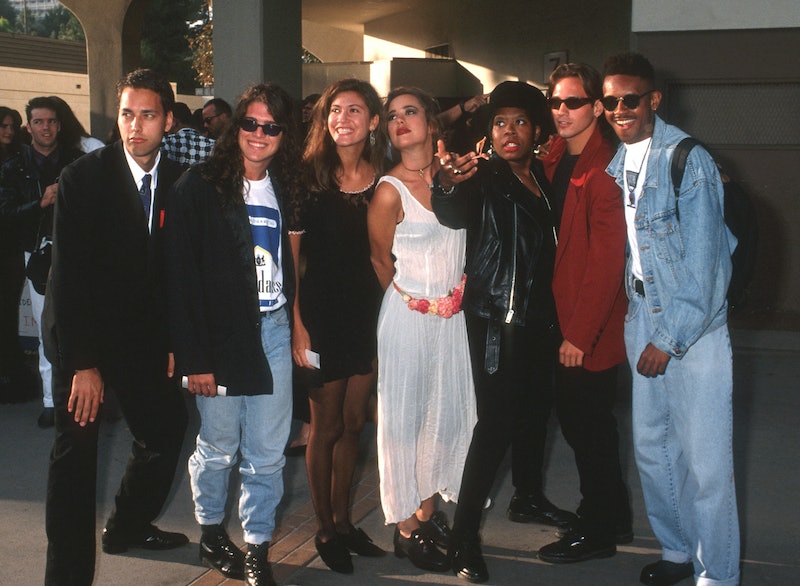 When MTV's The Real World debuted in May 1992, reality TV was still a pretty novel concept. “There weren’t a lot of other reality shows on the air,” producer Jonathan Murray told Entertainment Tonight in 2014. “What we were doing at that time — putting seven people in a house from different backgrounds — was very different. Our story came from their inexperience of living with people different from themselves, and that resulted in conflict, and that conflict resulted in growth, and that was our story arc.”

Over the course of 13 episodes, the cast clashed over issues of sexism, sexuality, and race, and the heated arguments were not always neatly resolved. Now Paramount+'s new show, The Real World Homecoming: New York will give the original Real World: New York cast a chance to live together again in the same loft – and perhaps come to a new understanding over old conflicts.

“Hopefully we’ve reached this level where the slings and arrows and heatedness can mature into a rational conversation and a real discourse,” cast member Rebecca Blasband told The New York Times.

Below, see where the original cast is 30 years later.

Rebecca was 24 when she was on Real World: New York. Per ET, she was originally introduced as a "moody artist" and folk singer from Pennsylvania. One of her most dramatic storylines involved her dating one of The Real World directors.

Today, Blasband is still a singer and signed a recording contract with Warner/Chappell Music. Her first album was called The Rebecca Blasband, and she released another album, Here, in 2017.

Andrew was the 23-year-old indie rock singer of the house. He moved from Michigan to New York City in the hopes of breaking out with his rock band, Reigndance.

Today, Comeau performs as a solo artist in Los Angeles. He told The Entertainer! Magazine in 2020 that though he's "extremely proud" of everything Reigndance accomplished, they disbanded in 1997. In the 2000s, Comeau relocated to Los Angeles and played folk music with River Rouge until they also disbanded in 2016. He began writing his own rock songs again in 2015, and released his first hard rock solo EP, Wrong Within, in March 2020.

Heather was 20 in 1992, and she was "the driven and outspoken New Jersey-based rapper" of the house. At the time, she was recording her first solo album, which addressed issues of date rape and misogyny.

Today, Gardner is a Sirius XM radio host and lives in New Jersey with her husband. She's produced two albums, and signed with MCA Records in 1997. She told The New York Times that she agreed to do Real World: New York because she felt it was important to portray Black people and hip-hop singers as something other than "crude and inherently violent."

“My record company didn’t understand it,” she said. “And the hip-hop world didn’t initially embrace it. It took a lot of work to earn their stamp, of me being like, ‘Yo, this was just a documentary — I didn’t quote-unquote sell out."

Julie was the youngest housemate at 19. She hailed from Alabama and told OWN in 2014 that she agreed to be on the show so she could have "rent paid for while I studied dance, and that would be my springboard."

Per People magazine, Gentry now teaches dance and is the vice president of College Choice Foundation, which helps low income students attend college. She moved back to Birmingham after filming the show and married restauranteur Joshua Gentry in 1998. Together they have two kids.

Norman was 25 and working as a photographer and fashion designer in 1992. He was the series' first openly gay cast member, and a lot of house conversations revolved around his sexuality and relationships. "When the show aired, I was perceived by some cast and the public as bisexual, which was hurtful and a lot to bear,” he told The New York Times.

Today, Korpi is helping out his family's bakery in Michigan, but he told People that he normally lives in Rancho Mirage, California with his partner Bill. He's also patented several creations, including an adaptive computer stand.

Eric was a 20-year-old model from New Jersey and was known as the most eccentric and charismatic in the cast. When he came onto the show, he was modeling for Armani, and The Real World always teased a romance between him and Julie.

Today, Eric is a health and wellness facilitator, per People. Confusingly, Nies was never actually able to set foot in the loft for the reunion show, vaguely telling The New York Times that he only communicated with the housemates over video monitor and the separation was "definitely not by my choice."

At 26, Kevin was the oldest roommate in the house. He was a writer for Rolling Stone, and it often unfortunately fell to him to explain racism and prejudice to the other cast members. “I got stigmatized as a politically angry Black man, and that stuck with me for a long time,” he told The New York Times. “It was very painful having to deal with that.”

Today, Powell is preparing for the release of his 15th book, a biography of Tupac Shakur. He continues to be a journalist, poet, and activist, and has also run for Congress twice in New York. "My life is definitely public service," he told People. "I'm as angry as I was back in the '90s, but I realized my role now as a writer, as a leader, as an activist, is to be a bridge builder."

More like this
Where Is Armie Hammer’s Ex-Wife Elizabeth Chambers Now After 'House Of Hammer'?
By Grace Wehniainen and Radhika Menon
What’s New On Netflix: Ana De Armas’ 'Blonde' & A Nick Kroll Special
By Arya Roshanian
How To Stream 'Pretty Wild'
By Arya Roshanian
Here's How To Apply For 'Love Is Blind,' No Matter Where You Live In The US
By Grace Wehniainen
Get Even More From Bustle — Sign Up For The Newsletter