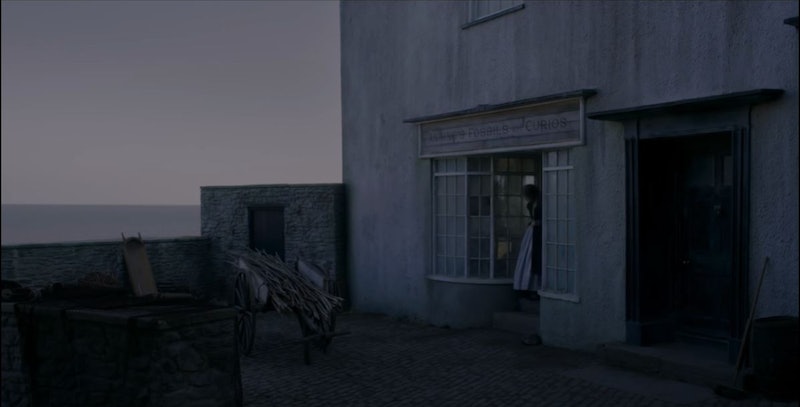 The legendary paleontologist Mary Anning made some of her most exciting discoveries not far from Lyme Regis, a town in England's West Dorset. The area is known as the Jurassic Coast, thanks to Anning's monumental finding. And the biopic on Anning's life, Ammonite, was filmed right in Lyme Regis, with much of the town and Jurassic Coast providing a backdrop for many of its wind-swept scenes.

Ammonite finds Anning in the midst of managing her fossil shop, which she runs out of her home in Lyme Regis. It's there that she's approached by Roderick Murchison (James McArdle), a famous geologist in his own right, who requests that Anning take care of his ailing wife, Charlotte (Saoirse Ronan). Charlotte eventually becomes Anning's apprentice, and their close working relationship soon blossoms into a romance.

The two spend much of their time outdoors, as Anning's day mostly consists of searching for fossils to sell in her shop. They travel along cold, windy beaches, digging up fossils with their hands, and taking them back to the shop. It's in these trips together that they find companionship in each other.

According to The Daily Mail, at least some of those shots were on location in Dorset, as they managed to snag behind-the-scenes photos of the filming as it happened last March on Eype Beach. Visit Dorset, the English county's tourism site, also mentions that parts of Lyme Regis were given an 1800s makeover for the film's on location shooting, which includes the creation of a fake Georgian house front, a few storefronts, and a stables. All of which made the perfect setting for Ammonite.

More like this
What’s New On Netflix: Ana De Armas’ 'Blonde' & A Nick Kroll Special
By Arya Roshanian
12 ’90s Movie References You Missed In 'Do Revenge'
By Radhika Menon
Florence Pugh Reflected On Her ‘Don’t Worry Darling’ Experience On Opening Day
By Brad Witter
How To Stream 'The Woman King'
By Morgan Leigh Davies
Get Even More From Bustle — Sign Up For The Newsletter