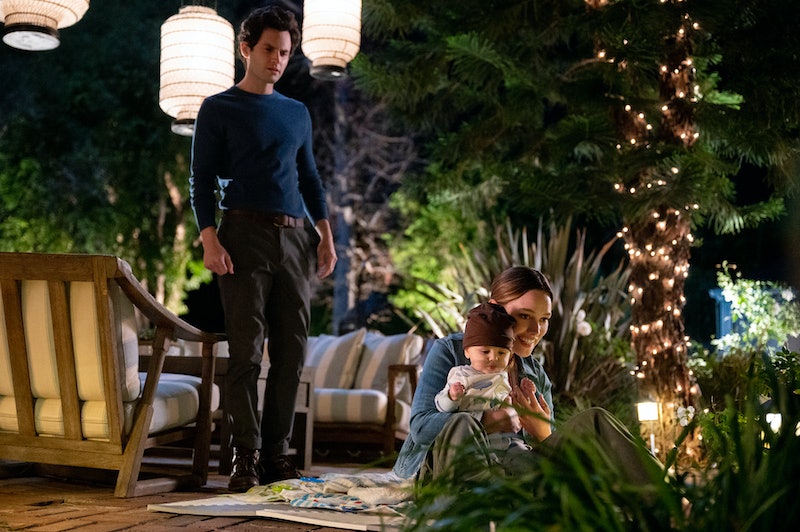 Joe Goldberg is back on the prowl in YOU Season 3. After stints in New York and Los Angeles, he’s relocated to the San Francisco suburb of Madre Linda with Love to raise their baby. Initially, it seems like the perfect place for two serial killers to lie low. “We are just the nice, normal neighbors next door,” Joe assures Love early on. But as soon as he notices a beautiful new woman, he returns to his old ways, setting off more murder and mayhem.

Madre Linda is not actually a real town, and the season was filmed in Southern California, not Northern California — around the Los Angeles area to be exact. “Today is our last day of shooting season 3 of #YouNetflix. Can I brag to you for a hot second?” showrunner Sera Gamble tweeted in April. “We had zero on-set positive COVID tests through a significant and scary surge here in LA. And haven’t had one since. Because every single member of cast & crew worked very hard to take care of each other during a time that’s stressful, in a situation that’s tough to control.”

According to Narcity, Joe and Love’s white picket fence home is located in Van Nuys, California, a neighborhood on the outskirts of Los Angeles. One blogger visited the location and noted that the area, Cameron Woods, is often used for filming; Joe and Love’s house in particular was reportedly featured in the original Dynasty TV series, the Chicks’ 1999 “Ready to Run” music video, and Season 2 of 9-1-1.

The setting marks a change from Caroline Kepnes’ third YOU book, You Love Me, which Season 3 is loosely based on. In the book, Joe flees to the Pacific Northwest rather than Southern California. He settles in Bainbridge Island, a city in Washington that you can visit from Seattle by ferry. “With this book, I read about the Pacific Northwest. I deep-stalked so many strangers that live there, reading their blogs and their tweets, to get a sense of it. And I watched YouTube videos. I read the Cedar Cove books,” Kepnes told Rolling Stone of her writing process. “Part of my motivation for finishing that draft was to actually get to go there. Going to Bainbridge Island was so helpful. After reading about the ferry, suddenly being on it and seeing how it feels going into the coffee shops and hearing the music that plays in there and all of that — it contributes so much to the atmosphere.”

Though the particulars of the story may be different, Joe still ends up in roughly the same place on the show as in the book: with a dead body on his hands and a creeping fear that he might be not be as equal of a match for Love as he thought.

More like this
Here’s When You Can Expect More ‘Indian Matchmaking’
By Brad Witter
Here’s Where You Can Stream 'Schitt's Creek' After The Comedy Leaves Netflix
By Brad Witter
Here's What Jeffrey Dahmer's Dad Has Said About His Other Son, David
By Grace Wehniainen
The 'Heartstopper' Cast Were Spotted Filming In A Major City
By Nola Ojomu and Sam Ramsden
Get Even More From Bustle — Sign Up For The Newsletter