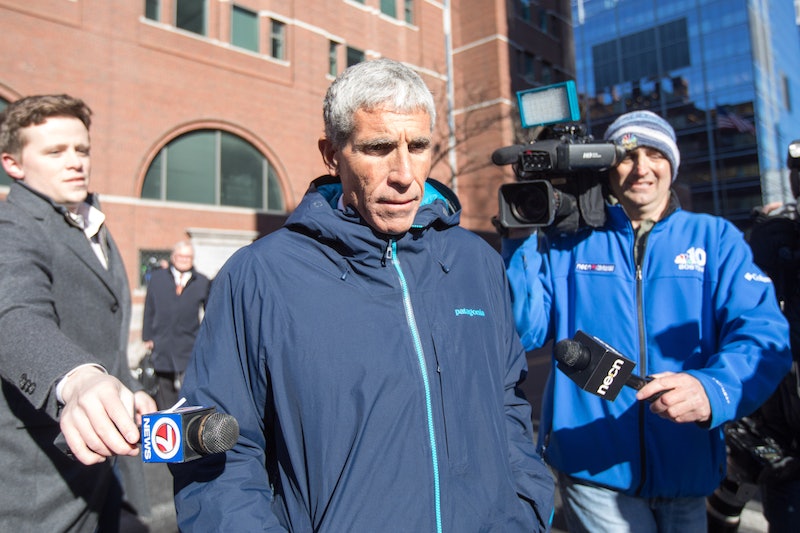 The 2019 college admissions scandal is a shocking example of upper class chicanery — one soon to be dramatized by a Netflix documentary aptly titled Operation Varsity Blues: The College Admissions Scandal. At the center of it all is William "Rick" Singer, the man considered to be the mastermind behind the whole scheme. While many of the parents involved have since served time in jail, per Associated Press, Singer has not been sentenced since he pled guilty to money laundering, racketeering, obstruction of justice, and tax evasion in March 2019.

As detailed by USA Today, Singer is a former athlete turned sports coach turned college counselor who marketed his private business, The Key, to wealthy elites with the promise of ensuring their child got into any top tier school. He did this by bribing sports coaches and test proctors to falsify athletic participation and lie about high test scores. The money he received in exchange was then laundered through his nonprofit, Key Worldwide Foundation, and played off as charitable donations.

Described by USA as a competitive "go-getter," Singer realized that the business of opening "side doors" for rich families was rather lucrative early on. A 204-page FBI affidavit revealed that The Key had its first allegation of bribery in 2008, just two months after it was incorporated. Singer's methods ranged from photoshopping kids into sports games to even allegedly paying someone to take the SATs for the students. According to USA, Singer "boasted" that he had helped nearly 800 upper class students get into college using these methods.

The news of the scandal broke in March 2019, after a federal indictment named over 50 people in the case, including Singer, 33 parents, and over 13 coaches and associates. In the intervening months, seven people were sentenced to varying degrees of prison time, including actor Felicity Huffman, who pled guilty to fraud and received 14 days in jail, one year of probation, 250 hours of community service, and a $30,000 fine. Former Full House star Lori Loughlin was also sentenced to two months in prison, a $150,000 fine, and 150 hours of community service.

Singer, for his part, has largely stayed out of the public eye since 2019. In 2020, USA Today reported that in November 2019, Singer had been pursuing a doctorate in psychology at Arizona's Grand Canyon University. According to his lawyer Donald Heller, Singer had been hoping to complete the degree “some time in 2021 or 2022.” But as of July 2020, Singer was no longer a student.

According to the official United States District Attorney's Office in Massachusetts, Singer "agreed to cooperate with the government's investigation" after he pled guilty in the case. In 2019, the website noted that Singer “was released on conditions” which included a $500,000 bond. As of today, it appears that the proceedings have stalled. Under Singer’s name, the website simply notes that “there is no sentencing hearing scheduled at this time.”

That's about as much as we know about Singer's case. USA Today notes that he's repeatedly declined interviews with the press through his attorney and even maintained silence when directly confronted by a TMZ video crew in Florida in 2019.

According to CNN, Singer faces a maximum sentence of 65 years in prison, three years supervised release, and a $1.25 million fine.

More like this
Glenda Cleveland Died 2 Decades After Trying To Turn In Neighbor Jeffery Dahmer
By Brad Witter
Where Is The Bling Ring’s Rachel Lee Now?
By Arya Roshanian
Lori Vallow’s Son Was Arrested For Sexual Assault Days Before 'Sins Of Our Mother' Premiered
By Brad Witter
Lori Vallow Faces The Death Penalty For Allegedly Murdering 2 Of Her Children
By Brad Witter
Get Even More From Bustle — Sign Up For The Newsletter

This article was originally published on Oct. 11, 2019