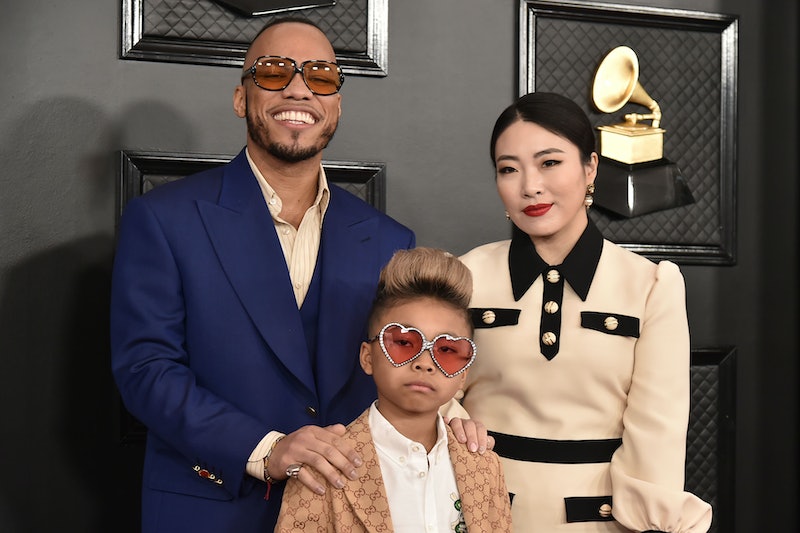 Throughout the course of his career, Anderson .Paak has often shared the spotlight with his son Soul, performing with him on The Ellen DeGeneres Show in 2017 and featuring him in the vertical video for "Tints" in 2018. Paak's wife Jaylyn, however, seems to prefer cheering him on from the sidelines rather than taking center stage. He does mention her occasionally in interviews, but they keep their relationship pretty private.

Still, there are a few things we know about the couple. In a 2016 interview on The Breakfast Club, Paak explained that he met Jaylyn — then a student in South Korea — at music school. Around the time she had Soul, their first son, Paak was suddenly let go from his job on a marijuana farm, and the two experienced homelessness. They couch-surfed among relatives and friends and even squatted at one point, so she's been by his side through some difficult times. "She's the one who came from Korea, didn't speak [any] English, she's [the one who has] the balls," he said of their rougher times together.

Paak also confirmed to The Breakfast Club that this is his second marriage, but that Jaylyn "is the one that matters."

Shortly after that period, .Paak completed work on his debut mixtape, 2012's O.B.E. Vol. 1, and landed a gig drumming for American Idol contestant Haley Reinhart. Per LA Weekly, this allowed him to get back on his feet and keep recording; in 2014, he released his first studio album, Venice, and went on to nab his first Grammy nomination for his 2016 sophomore record Malibu. (He won Best Rap Performance for his song "Bubblin'" in 2019, as well as Best R&B Album for Ventura and Best R&B Performance for "Come Home" in 2020 and Best Melodic Rap Performance for “Lockdown” in 2021).

As for Jaylyn, she appears to prefer keeping things on the DL, deleting her Instagram and rarely popping up on Anderson’s pages, though their son Soul is featured prominently in many of Anderson’s snaps. But despite the lack of public evidence of their relationship, there’s no reason to worry the couple have called it quits. A March 2021 profile of Paak in Esquire mentions Jaylyn and calls her a singer in a gospel rock group; it also notes that he and Jaylyn’s house is bilingual and that he encourages Soul — an avid K-pop fan — to speak Korean.

More like this
Meghan Trainor & Daryl Sabara Are Expecting Their Second Baby
By Jake Viswanath
Adam Levine & Behati Prinsloo Welcome Their Third Child Together
By Jake Viswanath
Hilary Duff's Husband Matthew Koma Has Her Name Tattooed On His Butt
By Jake Viswanath and Stephanie Downs
Mimi Webb’s IRL Situationship Inspired “Red Flags”
By Catharina Cheung
Get Even More From Bustle — Sign Up For The Newsletter
From hair trends to relationship advice, our daily newsletter has everything you need to sound like a person who’s on TikTok, even if you aren’t.

This article was originally published on Feb. 12, 2017