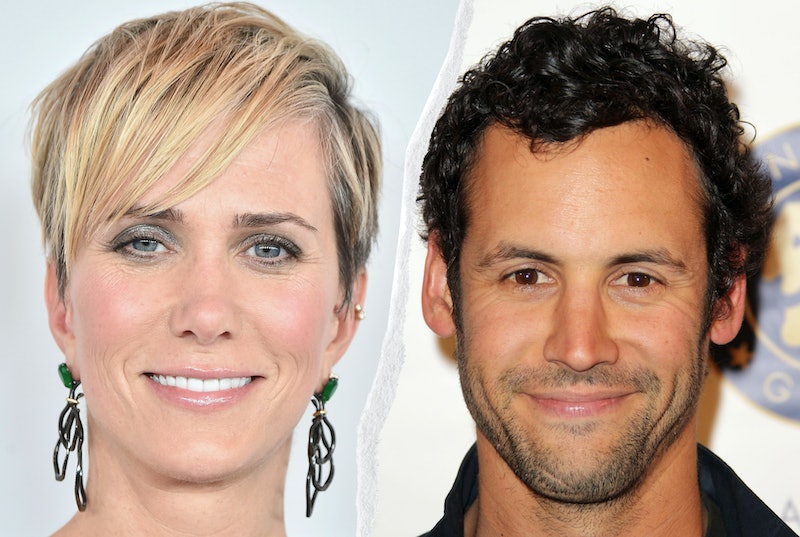 Congratulations are in order for a certain Barb and Star star. During a February appearance on The Howard Stern Show, Saturday Night Live alum Kristen Wiig seemingly confirmed that she had married her fiancé, Avi Rothman. "In my home, I'm very lucky about having these two babies, and my husband and they make it all better," Wiig said. "It's changed my life."

In 2020, the pair welcomed twins via the help of a surrogate. During the credits of Wiig's most recent film, Barb and Star Go to Vista del Mar, eagle-eyed viewers noticed an "Avi, Luna & Shiloh" shoutout in the "special thanks" section, which many have taken as confirmation of the babies' names. If that's the case, this is certainly a special, low-key way to share the news.

These milestone updates might lead you to wonder, who is Avi Rothman? If you don't already know, he actually shares a comedy background with the Bridesmaids star. According to People, Wiig and Rothman became engaged in 2019 after about three years of dating. They sparked engagement rumors in May 2019, when the Ghostbusters actor was seen wearing a sparkler on her ring finger during a screening of Booksmart in Los Angeles. The two were first spotted in public together in 2016 when they were seen showing some PDA during a trip to Kauai, Hawaii, per People and E! News. At the time, a source told People that they had been "secretly dating for a few months" and that they were "really happy together."

Based on People's report about Wiig's beau, the couple has quite a lot in common. Like his wife, Rothman has an impressive background in the comedy landscape. In addition to writing, producing, directing, and acting, he also trained at the Groundlings theater in Los Angeles. The theater focuses on improvisation and sketch comedy and just so happens to be where Wiig also studied.

In 2016, People offered up even more details about Wiig's now-husband, including exactly how he found his passion for the world of comedy. He told The Laugh Button in 2010 that he has his family to thank for his love of the genre:

I guess I was always attracted to comedy ever since I was a kid. I remember I used to imitate my grandparents… I think a lot of people in my family had good senses of humor… My brother, who is 10 years older than me, would always make me laugh. He always seemed to have an easy time finding humor in different situations.

As he went on to say in the interview, he has a penchant for developing unique and hilarious characters, just like Wiig, including one named the Yoga Guy. Speaking of yoga, elsewhere in the interview, he detailed to the publication that he's dedicated to the practice. "My sister got me into yoga about seven years ago. For a while I became addicted and was in class five times a week,” he said. "I’m usually the quiet one in class, generally keeping to myself."

He went on to say that his time in the yoga studio definitely helped him develop the Yoga Guy character. "I love observing people," he said. "At times I thought there were so many characters in my yoga class. I would see a lot of guys blatantly hitting on and trying to pick up women, and vice versa."

Besides his well-established comedy background, People also revealed one very interesting factoid about Wiig's husband that relates back to a famous superstar: Apparently, the funnyman is good friends with Adele. Talk about a random, and incredibly awesome, Hollywood connection.

More like this
Who Is Nick Cannon Dating & How Many Kids Does He Have?
By Jordyn Tilchen and Radhika Menon
Hailey Bieber Just Responded To *That* Viral Met Gala Moment
By Radhika Menon and Sam Ramsden
Adam Devine Hilariously Let Everyone Know He’s *Not* Accused Cheater Adam Levine
By Brad Witter
Here’s Everything Coming To & Leaving Netflix In October
By Jake Viswanath
Get Even More From Bustle — Sign Up For The Newsletter

This article was originally published on Aug. 16, 2019