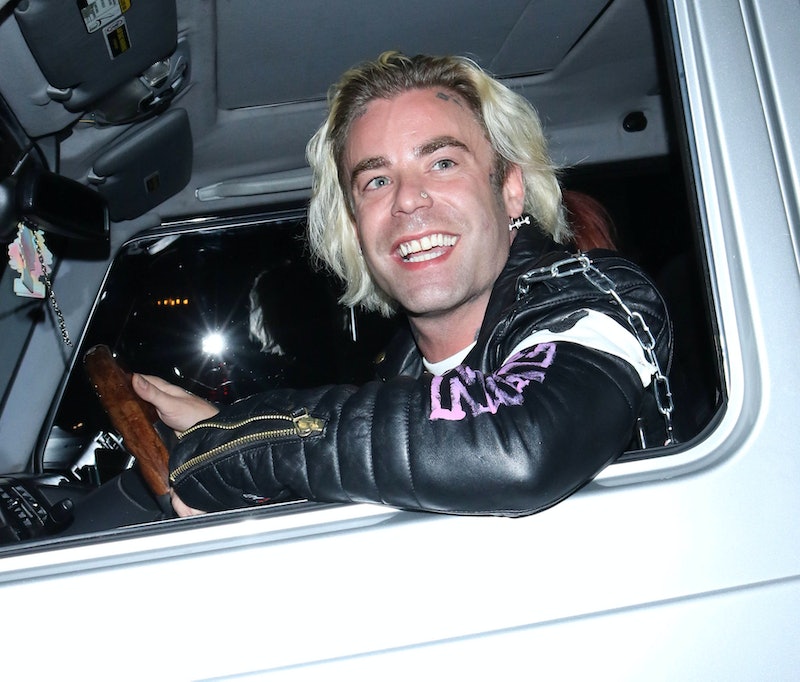 The pair still hasn't officially confirmed their relationship, but between their recent romantic duet, his tattoo of her name on his neck, and their recent masked dinner outings, it seems that Avril Lavigne and Mod Sun are a couple. Lavigne is best known for her chart-topping singles and previous relationships with Sum 41's Deryk Whibley, The Hills' Brody Jenner, Nickelback's Chad Kroeger, and billionaire heir Phillip Sarofim, so it's understandable to want to know more about her new pop-punk lover, Mod Sun.

Born Derek Smith on March 10, 1987, in Bloomington, Minnesota, the artist who is now known as Mod Sun immersed himself in music from a young age. He moved around a lot as a kid following his parents' divorce, and before becoming a professional musician in his own right, he learned the drums, guitar, and piano. Mod Sun took his skills on tour with emo bands like Four Letter Lie and Scary Kids Scaring Kids, per an interview with Ones to Watch, and he spent a period of his early adulthood unhoused in California before fully diving into the art that launched his multi-faceted career.

In 2009, Mod Sun launched his solo music career with the release of three mixtapes: I'll Buy Myself, Let Ya Teeth Show, and How to Make a MOD SUN. He went onto release two more mixtapes, three EPs, and a book titled Did I Ever Wake Up? before putting out his debut album, Look Up, in 2015. Among the artists featured on the album were G-Eazy, blackbear, Machine Gun Kelly, and Blink-182's Travis Barker. Since then, he's released five more books and three more albums, including 2021's Internet Killed the Rockstar, which features "Flames," his duet with Lavigne.

His reported fling with the "Complicated" singer isn't Mod Sun's first notable relationship. In 2018, he began a polyamorous relationship with Bella Thorne, who was also seeing Tana Mongeau at the time. Sun and Thorne split in April 2019, and he began seeing Mongeau shortly after, though the nature of their relationship was unclear. The supposed love triangle ended in a messy Twitter spat between him and Thorne, and they haven't been linked to one another since.

In October 2020, The Sun published photos of the pop-punk star hanging out with Demi Lovato in a car shortly after her split from ex-fiancé Max Ehrich, though a source told E! News that Sun and Lovato were simply "just friends." Considering Lovato has recently forayed into pop-punk herself through collaborations with Barker and All Time Low, her friendship with Sun makes sense.

Lavigne and Mod Sun first became linked in December 2020 after the pair posted photos from a recording studio, presumably recording "Flames," released Jan. 8, 2021. The pair has since shared more photos from the studio with Machine Gun Kelly and been spotted out on the town in Los Angeles. Of course, Sun also got a tattoo of the word "Avril" on the back of his neck in February 2021. Lavigne has revealed that she's working on a new album, so it's certainly possible that we'll hear more songs from the pair in the near future.

"Avril has a history of falling for people that she works with. She falls in love with them for their musical creativity and expression," a source told Entertainment Tonight. "Avril and Mod Sun have been spending a ton of time together and getting to know each other better."

In a recent Nylon interview, Mod Sun called Lavigne "the ultimate queen" and detailed his longtime fandom of the pop/punk princess. "A lot of my [teenage] style was based off of her, too," he said. "I tell her this sh*t all the time. I fan out. I'll talk up your sh*t if you don't. I'll remind you how much of an icon you are."

More like this
Gigi Hadid’s Dad Shared What He Knows About Those Leonardo DiCaprio Rumors
By Brad Witter
Who Is Nick Cannon Dating & How Many Kids Does He Have?
By Jordyn Tilchen and Radhika Menon
Alison Mosshart Is The Ultimate Rock'N'Roll Star
By Sophie McEvoy
Lizzo Twerks While Playing James Madison's 200-Year-Old Crystal Flute Onstage
By Radhika Menon
Get Even More From Bustle — Sign Up For The Newsletter