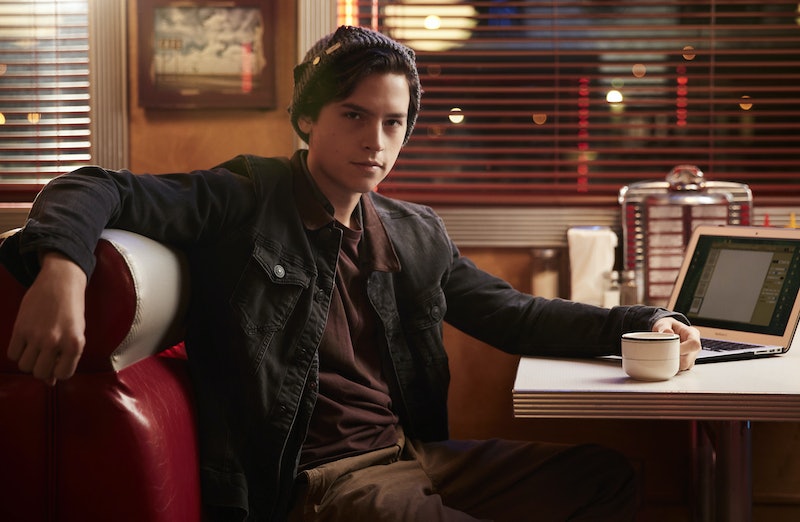 Ever since confirming he had “permanently split” with Riverdale co-star and girlfriend of three years Lili Reinhart in August 2020, interest surrounding actor Cole Sprouse’s dating life has become a more complicated mystery than unmasking the CW show’s TBK villain. Shortly after the breakup, Sprouse was spotted hugging model Reiña Silva in October 2020, which incited dating rumors. But flash forward to October 2021, just as Season 5 of Riverdale is coming to close, and it appears he has been in a loving relationship with model Ari Fournier for most of 2021.

Their first sighting together was in February 2021. Since then, the couple has kept their relationship relatively low-key, posting the occasional Instagram photo of one another, celebrating each other’s birthdays, and going on cute dates throughout the United States and Canada. They’ve also been seen gardening together on Sprouse’s twin brother Dylan’s Instagram story.

Unfortunately, they’ve also had to deal with their own fair share of flack from Sprouse’s fans, some of whom are upset that, while Bughead might be canon on the show, it is no longer happening in real life. The 29-year-old actor has tried to downplay their impact, jokingly saying that he enjoys posting images of his girlfriend to “piss off the 14yos.”

Ahead of Riverdale’s Season 6 premiere on Nov. 16, here is everything you need to know about Cole Sprouse and Ari Fournier’s relationship.

Although it’s not clear how the two met and began dating, photos of the pair holding hands began to appear online in late February 2021 after they were spotted on a walk together in Vancouver. According to Page Six, the couple went for a cute walk around the city and later had “brunch in the city’s historic Gastown neighborhood.” A few days later, Sprouse and Fournier were seen grabbing coffee together arm in arm in Vancouver on March 7. Since then, the couple has gone on to a bunch of cute dates in the Los Angeles area throughout their relationship.

The 23-year-old model is from Montreal, Canada, and shared a glimpse into her fast-paced life and upbringing on her YouTube channel. In a Q&A video, Fournier revealed that she kickstarted her modeling career at age 15 when an agency reached out to her after spotting her on Instagram. Since then, her career has continued to gain traction around the globe — citing jobs in Barcelona and China — and she eventually signed on with Elite Model Management.

In addition to modeling, Fournier also shares travel vlogs and makeup/hair tutorials on her YouTube channel, although she hasn’t posted since August 2020. Most notably in her Q&A, which was posted in April 2020, Fournier revealed she was in a then-four-year-long relationship. While it’s not certain when her last relationship ended, both Fournier and Sprouse share a similar path of separating from a long-term relationship prior to dating one another.

Cole & Ari’s Instagrams Of Each Other

When it came to sharing images of one another on Insta, Sprouse was the first to share a sweet photo of Fournier in July. He also used the moment to jokingly stand up to fans who were upset to see him dating someone new. In addition to publishing the photo, he shared a few extra images of Fournier on his Instagram Story and wrote “time to piss off the 14yos again,” per E!

Sprouse, however, took a very different approach to Fournier’s 23rd birthday wishes, as his hilarious photo set featured images of Fournier mid-bites of pasta, burgers, and ice cream. “Birthday girl gunna beat my ass for these. ❤️💋” he added.

According to Cosmopolitan, Sprouse initially posted another set of images on Instagram for Fournier’s birthday, but it was taken down after his fans repeatedly reported the image for “violence and incitement.”

It’s safe to say Sprouse was not pleased by this, and he later took to his Instagram Story to share the image of Instagram notifying him that the post went against the app’s “Community Guidelines.” In response, Sprouse captioned the image with, “These kids are insane.”

More like this
Sydney Sweeney Is Engaged To Her Low-Key Businessman Beau
By Jack Irvin and Jake Viswanath
Who Is Nick Cannon Dating & How Many Kids Does He Have?
By Jordyn Tilchen and Radhika Menon
Rhys Ifans Has A Good Reason For Keeping His Love Life On The DL
By Maxine Harrison
Gigi Hadid’s Dad Shared What He Knows About Those Leonardo DiCaprio Rumors
By Brad Witter
Get Even More From Bustle — Sign Up For The Newsletter