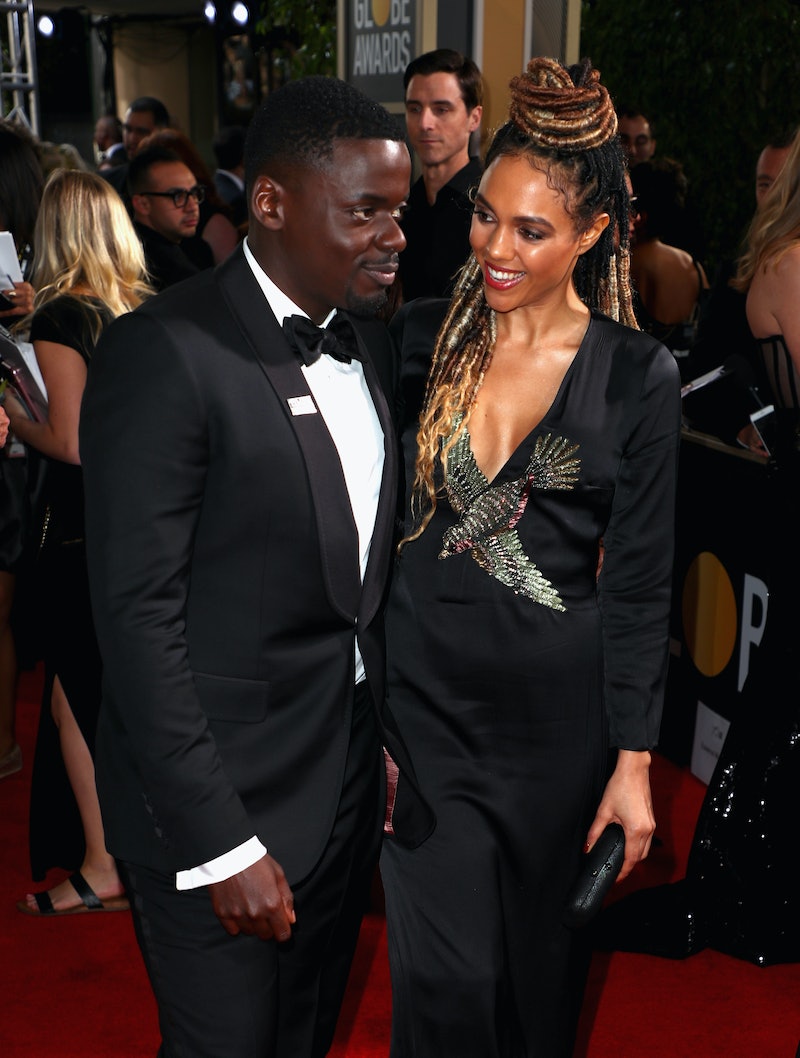 Daniel Kaluuya is most famous for his starring roles in the genre-defying masterpiece Get Out and Marvel hit Black Panther. But most recently, he’s earned acclaim for his role as Fred Hampton, the deputy chairman of the Black Panther Party, in Judas and the Black Messiah. Kaluuya's performance even earned him his first Golden Globe for Best Supporting Actor on Feb. 28, and he’s in the running to win an Oscar in the same category. Fans flocking to these movies and replaying his Golden Globes acceptance speech might be wondering whether this talented actor is single, but alas, Kaluuya, 32, seems to be off the market. So, who is Daniel Kaluuya dating?

The actor has been dating his girlfriend of at least three years. (He stepped out with her at the Golden Globes back in 2018.) The couple's relationship has been very private, so there isn't actually much we know about Kaluuya's girlfriend. According to Us Weekly, her name is Amandla Crichlow, an actress and producer at Kaluuya's production company, 59%, according to her LinkedIn. Kaluuya has yet to speak publicly about his relationship, so fans anxious to know all the details will have to wait until the couple feels ready to make their relationship more public, if they ever do decide to. In the meantime, a little internet sleuthing reveals hints about Crichlow's possible identity. An Instagram post by makeup artist Amber Amos featured a picture of the adorable couple at the 2018 SAG Awards, and tagged in the post was Kaluuya's Instagram account and another account, @amandlachrich. However, it appears that this account handle is no longer activated.

Since all her social media is private, there's not a lot more we can learn about the actor from the internet. But her IMDb page reveals that most of her work has been in television, as she played Gloria in Prime Suspect 7: The Final Act, the mini-series starring Helen Mirren, and also played Alisha Daniels in The Bill. Since then, she has acted in two short films, but hasn't had any acting credits since the short Anonymous in 2012.

IMDb also reveals that Crichlow's sister is Lenora Crichlow, who has quite a few acting credits herself. She also had a reoccurring role on The Bill alongside her sister and has appeared in many other shows since then. Viewers might best remember her as the star of the Black Mirror episode "White Bear". (You know, the one where a woman wakes up with no memories, only to find that everyone around her records everything she does on their phones without offering her any help as murderous people in masks seem to be hunting her down? Yeah, it was far from a pleasant episode, but Lenora's acting chops were on full display.)

As it turns out, Amandla and Leonora are also the daughters of a famous Black activist, Frank Crichlow. In his obituary in The Guardian, he is described as a "stalwart symbol of Black urban resistance in the face of police persecution." After immigrating to the U.K. from Trinidad, Crichlow opened a restaurant called the Mangrove, which quickly became a hotspot for celebrities such as Nina Simone, Marvin Gaye, Sammy Davis Jr., Diana Ross, and the Supremes, per The Guardian.

But after his restaurant became the target of multiple raids that uncovered nothing illegal and a multitude of petty fines — the result of racist policing — Frank decided to fight back against injustice. He was arrested in 1970 for protesting against police harassment, and he and eight other defendants, known as “The Mangrove Nine,” were acquitted after a highly publicized trial revealed the pervasive racism in the police force, per The Guardian. The obituary adds that Frank then established the Mangrove Community Association, "providing advice and assistance, nurturing local projects to improve housing, establish youth facilities and services for the elderly, and help rehabilitate ex-offenders and those with drug and alcohol addictions." The legacy of the Mangrove can still be seen in the Notting Hill carnival celebrations; Frank's protests were a significant part of the event's history, per the celebration's website.

It's clear that Amandla comes from an impressive family, making her the perfect match for Kaluuya amid his breakout film performances. The two make a powerful team, and here's hoping we'll be hearing a lot more about Amandla in the future.

More like this
How Andrea Riseborough Got Nominated — & Almost Disqualified For An Oscar
By Jake Viswanath
12 Years Ago, Austin Butler Manifested His Oscar Nom In This Disney Movie Scene
By Jake Viswanath
2023 Oscar Nominations List: 'Everything Everywhere All At Once' Leads With 11 Nods
By Jake Viswanath
Who Is Allison Williams Dating After Her Divorce? She’s Engaged With A Child
By Jake Viswanath
Get Even More From Bustle — Sign Up For The Newsletter
From hair trends to relationship advice, our daily newsletter has everything you need to sound like a person who’s on TikTok, even if you aren’t.

This article was originally published on March 4, 2018