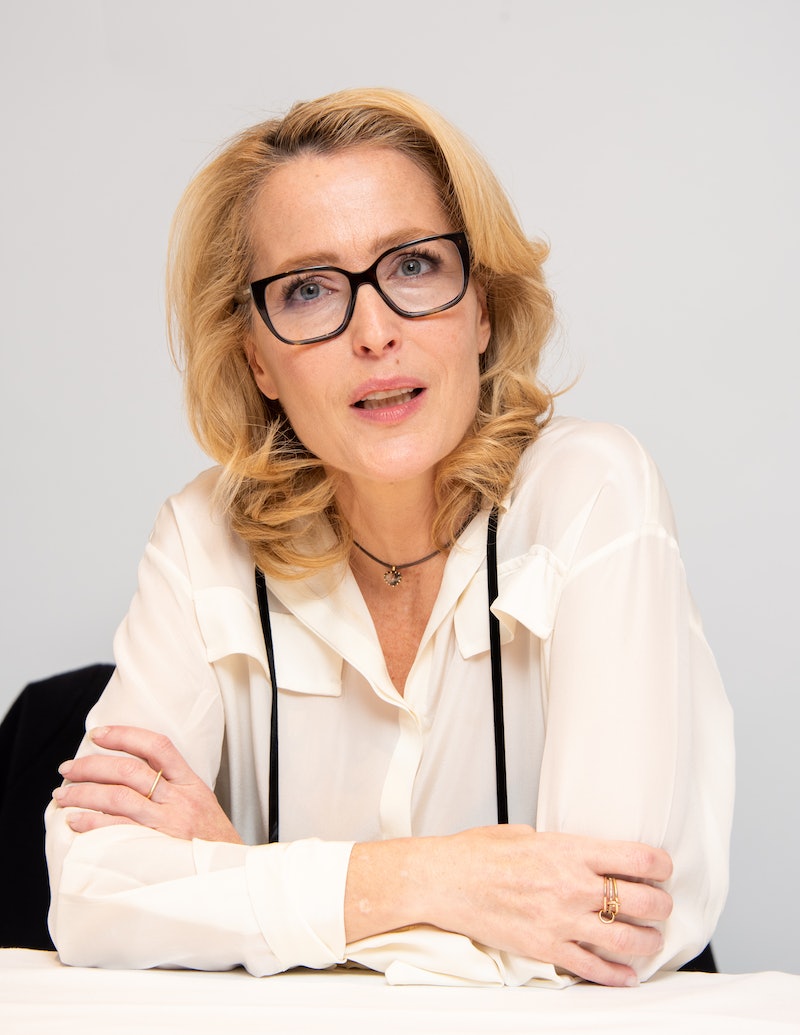 Surely most people in the world must fancy Gillian Anderson at least a little bit, right? When she first emerged as Scully on The X Files in 1993, she wasn't just responsible for many people's "I want to believe" phases, but for their sexual awakenings too. That's why I couldn't think of a more suitable actor to play a sex therapist on Netflix show Sex Education than her. She's perfect. Recently her appearance on The Crown as Margaret Thatcher has had people feeling very confused after they found themselves fancying the notoriously unpleasant Conservative Prime Minister. Her appearance on the show has renewed my curiosity in who's lucky enough to call Anderson their own. So, who is Gillian Anderson dating? I think I can safely say that I'm not the only one who wants to know.

Signs say the Emmy and a Golden Globe winning actress is single. Fresh from her extremely convincing portrayal of Margaret Thatcher in The Crown, Anderson and the royal drama’s creator Peter Morgan have reportedly split after a four-year relationship, according to the Daily Mail. Reports claim the separation is amicable and work/life commitments are supposedly to blame. Both Anderson and Morgan are remaining tight-lipped about the status of their relationship, reports The Evening Standard, but there’s a good chance that the couple will remain friends. I have contacted representatives of Anderson for comment and will update this piece as soon as new information becomes available.

Previously, Anderson had admitted that the relationship was only intended to be “part long-term.” Anderson first revealed her relationship status was back in February, 2018, when she opened up in a Times Magazine interview about her relationship with Peter Morgan. The actor, who explained that she identifies as bisexual to Out Magazine back in 2012, joked to the Times Magazine that she and Morgan were only "part long-term." The actress said: "I could be with a woman next year! Part of me looks long-term. As long as there's always a back door."

At the time, Anderson revealed that being in a relationship with someone who works in the same industry as her is a new, refreshing development. "I’m constantly grateful for the symbiosis because I haven’t had that experience before," she said. The Daily Mail was the first to pick up on their relationship, as on Oct. 28, 2016, the paper reported that Anderson had attended a party in New York alongside Morgan, where she was allegedly overheard telling friends they were in a relationship. Sadly it seems the couple weren’t meant to be.

Before Morgan, Anderson was dating Mark Griffiths, the father of two of her children, Felix and Oscar. They parted ways in 2012, the Daily Mail reported, but it's not known whether Anderson dated anyone else in the four-year interim between Griffiths and Morgan. Before her six-year relationship with Griffiths, Anderson had been married to photojournalist and documentary producer Julian Ozanne from 2004 and 2006, according to People Magazine.

The star's first marriage was with the Canadian television art director Clyde Klotz. They were married in 1994, and their daughter Piper Maru was born later that same year, according to Lifetime Magazine. The couple divorced a few years later in 1997.

Anyway, back to the present. As Anderson waves The Crown goodbye both personally and professionally (sharing some hilarious bts photos in the process), the actor is currently filming season 3 of Sex Education and frankly, we’re about ready for more of Dr Jean Milburn.

This article was originally published on Jan. 24, 2019