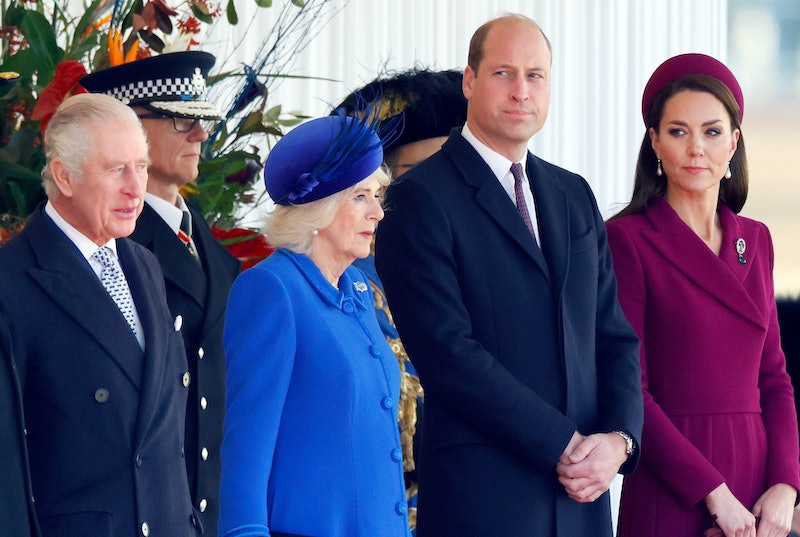 Years from now, many will remember exactly where they were for Meghan Markle and Prince Harry's tell-all with Oprah Winfrey. During their CBS interview in March 2021, the couple dropped revelations left and right about their tumultuous dynamic with the royals. They even named names at certain points: Harry revealed that his father, now King Charles, had "stopped taking [his] calls," and Meghan divulged a tearful conversation with Kate Middleton about flower girl dresses prior to her 2018 royal wedding. However, for most of the conversation, Harry and Meghan referred to key players as either "The Institution" or "The Firm." This leads to the all-important question: What is the difference between the royal "Institution" and "The Firm"?

In short, the core royal family appears to be labeled "The Firm," while the network of employees, PR reps, communications directors, and aides that work for them are known as "the institution." Meghan differentiated between the two at one point during the 2021 Oprah sit-down. "So, there's the family, and then there's the people that are running the institution," she explained. "Those are two separate things. And it's important to be able to compartmentalize that because the queen, for example, has always been wonderful to me."

Meanwhile, the much-anticipated release of the Duke and Duchess of Sussex’s Netflix docuseries Harry & Meghan on Nov. 8 will likely inspire a wave of new questions regarding the inner workings of the British royal family, as the couple shed light on their experiences within the royal sphere.

Find all of the details you need to know about the two groups and how they function, below.

What is the royal "Institution"?

A plethora of household staff and private secretaries are required to keep Buckingham Palace afloat. According to CNN, employees of the royal institution work in one of five key departments. Those include human resources, IT, the Private Secretary's Office, and the Privy Purse and Treasurer's Office, which is used for financial matters.

So, what is "The Firm" Meghan and Harry refer to?

A clip from Meghan and Harry’s Oprah interview showed the Duchess of Sussex referring to the royal family as "The Firm," a rare move for the royals themselves. "I don’t know how [the royal family] could expect that after all of this time, we would still just be silent if there is an active role that The Firm is playing in perpetuating falsehoods about us," Meghan said.

“The Firm” is a term regularly attributed to the late Prince Philip, as reported in journalist Penny Junor's 2005 book, The Firm: The Troubled Life of the House of Windsor. "Prince Philip calls it 'The Firm,' and all the royal executives and their powerful associates are supposed to make every effort to avoid even a hint of scandal that could diminish the reputation of the family business," Junor writes. According to The New York Times, the origins of “The Firm” date back even further to Queen Elizabeth II’s father, King George VI, who ruled from 1936 to 1952 after his brother abdicated the throne. He's quoted as saying, "British royals are 'not a family, we're a firm.'"

In recent years, a "New Firm" was made up of seven senior working royals who officially represented the late Queen Elizabeth at events. This didn’t include titled family members such as Princess Eugenie and Princess Beatrice. In 2020, Prince Harry and Meghan Markle stepped back from their roles, and Prince Andrew was relieved of his responsibilities following ties to convicted sex offender Jeffrey Epstein. After the death of Queen Elizabeth II on Sept. 8, 2022, the “firm of seven” includes King Charles III and the Queen Consort, Camilla, Prince William and Princess Catherine of Wales, Prince Edward, the queen's youngest son, and his wife, Sophie, Countess of Wessex; and Princess Anne, the queen's daughter.

While “The Firm” has been used by reporters, authors, and even fictional characters in both The Crown and 2010's The King's Speech, royals themselves don't often utter the term. According to Edward Owens, royal historian and author of the 2018 book The Family Firm: Monarchy, Mass Media, and the British Public, Meghan's use of the word was strategic. "Meghan was once party to the secretive operation of the monarchy; but now she is firmly on the outside, and I think her phrase is suggestive of how she and Harry have been cut off and excluded," he told O magazine.

How does "The Institution" interact with members of "The Firm"?

From what Meghan and Harry shared during their March 2021 interview, the royal family is seemingly controlled by their own staff on several matters. At one point, Meghan said that she turned to senior members of the institution and the palace’s human resources department in order to seek treatment for her mental health challenges. However, she said she was told by HR, "There’s nothing we can do to protect you because you’re not a paid employee of the institution."

In another instance, Harry said Queen Elizabeth invited him and Meghan to discuss the terms of their exit from senior royal duties. "My grandmother said, 'The moment you land, come up to Sandringham. We’d love to have a chat,'" he recalled. But when the couple landed in the United Kingdom from Canada, the queen was suddenly "busy all week" and unable to meet with them. Harry said that correspondence between his personal secretary and the queen's (referred to as "CEOs" by Meghan) squashed the meeting.

"Doesn’t the queen get to do what the queen wants to do?" Oprah then asked during her infamous 2021 sit-down with the Duke and Duchess of Sussex. "No," Harry replied. "When you're head of The Firm, there [are] people around you that give you advice… and some of that advice has been really bad."

After the passing of Queen Elizabeth and the transfer of power to King Charles III, the institution is busy arranging for the reign of a new King. Adapting social, political, and royal preferences across the country falls into the hands of both the Institution and the Firm; however, the Institution is still very much in control of the way the country functions as a whole. On Sept. 10, 2022, along with William and Kate, Prince and Princess of Wales, Meghan and Harry made a trip to London to pay their respects and view the thousands of British citizens who had gathered around Buckingham Palace to mourn Her Majesty.

Even though Meghan and Harry have officially separated from the Institution and the Firm, they still recognize the impact of Queen Elizabeth II as queen, a mother, and a grandmother.

More like this
I Read Prince Harry's 'Spare' So You Don’t Have To: 11 Highlights To Know
By Marina Watts
Prince Harry Incorrectly Recites Christina Aguilera’s “Genie In A Bottle” Lyrics
By Jake Viswanath
'The Crown' Season 6 Has Suspended Filming "Out Of Respect" For The Queen's Death
By Bustle Staff
Here’s Why Tyler Perry Helped Prince Harry & Meghan Markle When They Moved
By Marina Watts
Get Even More From Bustle — Sign Up For The Newsletter
From hair trends to relationship advice, our daily newsletter has everything you need to sound like a person who’s on TikTok, even if you aren’t.