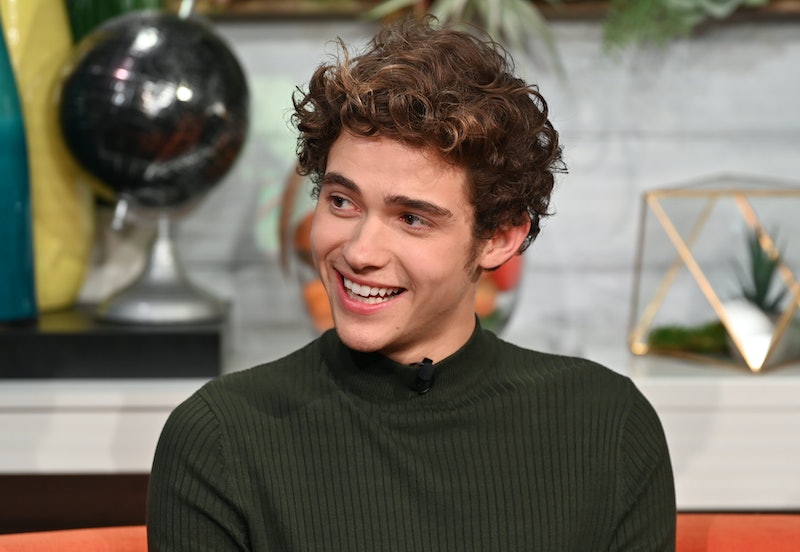 2021 brought High School Musical: The Musical: The Series star Joshua Bassett a lot of attention, both good and bad. In January, the 21-year-old actor was rumored to be the subject of Olivia Rodrigo’s hit song “Drivers License,” which she wrote about a devastating breakup that left her driving past her ex’s house in despair. If the rumors are true, the song’s scathing lyrics suggest that he broke her heart and quickly moved on to someone else, meaning he faced backlash from all corners of the internet regardless of the validity of the rumors. Ahead of the Disney+ show’s third season, fans are naturally wondering who Bassett is currently dating, and the answer is actually very simple.

In December, Bassett told GQ that his dating life was “non-existent,” and that’s just how he wants it after the tumultuous year that he went through. “I think that's something that's been good about this last little bit,” he explained. “I’m good on my own. I don’t need somebody else.” Given his intense experience in dealing with public breakups, the actor said that he’s not nearly prepared to fall in love again. “Ultimately, being in a relationship is a responsibility,” he said. “I don't know if I'm ready for that. I've only had three [relationships], despite what it seems.”

In May 2021, Bassett came out as part of LGBTQ+ communities in a Clevver News interview, when he revealed that he has a slight crush on Harry Styles. “I think he’s a nice guy, doesn’t say too much, but when he talks, it matters,” the actor said of the “Watermelon Sugar” crooner. “He’s just cool. Who doesn’t think Harry Styles is cool? Also, he’s hot, you know? He’s very charming too. Lots of things. This is also my coming out video, I guess.”

In a note posted to Twitter after the interview was released, Bassett thanked fans for their support. “My entire life people have told me my sexuality,” he wrote. “People have shamed me for things they know nothing about. I want to say thank you to those of you who stand for love and acceptance.”

After some questioned whether he was serious about coming out, Bassett clarified that he “wasn’t joking” in a June 2021 interview with GQ. “I stood behind every word that I said,” he affirmed. But he doesn’t want to label his sexuality within LGBTQ+ communities. “There are plenty of letters in the alphabet,” he said. “Why bother rushing to a conclusion? Sometimes your letter changes, sometimes you try a different one, other times you realize you’re not what you thought you were, or maybe you always knew. All of these can be true. I’m happy to be a part of the LGBTQ+ community because they embrace all.”

Prior to coming out, and even before “Drivers License” was released, HSMTMTS fans speculated that Bassett was dating Rodrigo. The rumors began when viewers noticed the co-stars’ undeniable onscreen chemistry after the show’s premiere. Not to mention, the two frequently appeared on each other’s Instagram feeds. But alas, they never confirmed that they were anything more than friends. And in August 2020, Rodrigo revealed that she was single again on TikTok with a video of her eating a muffin. “And that’s on failed relationships,” she captioned the clip.

Shortly after Rodrigo shared her TikTok, Bassett was spotted out with Disney star Sabrina Carpenter, prompting dating speculation. Again, neither of them confirmed anything, but Rodrigo’s lyrics about moving on with a “blonde girl” seemingly confirmed the theories that were floating around social media at the time. Unfortunately, the love triangle drama didn’t end there. Both and Bassett and Carpenter released songs that may or may not have been responses to the allegations Rodrigo made in “Drivers License.”

Roughly one week after Rodrigo’s record-breaking single came out, Bassett released a song called “Lie Lie Lie.” Interestingly, the actor quickly shut down rumors that the song was a rebuttal. “I wrote ‘Lie, Lie, Lie’ after I found out a friend had been lying about me behind my back for a long time,” he wrote on his Instagram story at the time. “It always hurts to hear that someone you thought you could trust would throw you under the bus when it benefits them. It happens to all of us, and I think all you can do is seek out people that build you up rather than tear you down.”

Later that month, Carpenter released a song of her own that seemed to make it quite clear that she was, in fact, the “blonde girl” in Rodrigo’s song. “Maybe you didn’t mean it / Maybe blonde was the only rhyme,” she sang on a track called “Skin.” But in a note on Instagram, she denied that her song had anything to do with the alleged drama. “I wasn’t bothered by a few lines in a (magnificent) song and wrote a diss track about it,” she wrote. “I was at a tipping point in my life for countless reasons. so I was inspired to do what I usually do to cope, write something that I wish I could have told myself in the past.” She added that “some lines address a specific situation” while others do not.

Over a year after these songs broke the internet, all three stars are living their own lives. Rodrigo has been linked to Zack Bia, while Bassett is proudly single — unless Styles comes calling, most likely.

More like this
Selena Gomez Confirms She's Single Amid Drew Taggart Dating Rumors
By Martha Sorren, Jake Viswanath and Jack Irvin
Everything You Need To Know About Kanye's Post-Kardashian Dating Life
By Bustle Editors
Michael B. Jordan Tackled His "Public Breakup" With Lori Harvey On 'SNL'
By Brad Witter
Who Is Pete Davidson Dating? He & Chase Sui Wonders Got Caught Kissing
By Jake Viswanath
Get Even More From Bustle — Sign Up For The Newsletter
From hair trends to relationship advice, our daily newsletter has everything you need to sound like a person who’s on TikTok, even if you aren’t.

This article was originally published on May 11, 2021