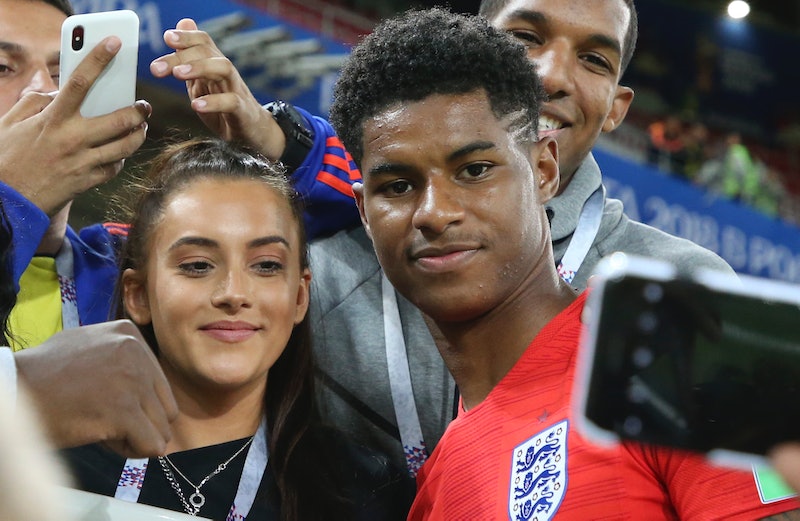 Congratulations to Marcus Rashford and Lucia Loi. The Manchester United forward proposed to his girlfriend of nine years, surrounded by white roses and fireworks in Los Angeles. Rashford confirmed their engagement on his Instagram with a sweet picture of the couple that has over 600,000 likes and counting. The caption simply reads: “24.05.22 @lucialoi”.

The proposal took place at a villa they are staying at in the city, after they enjoyed dinner at celebrity-hotspot Catch LA.

A source told The Sun that Rashford had been planning the proposal and he wanted to “make it special.” It certainly looks like he did. After Loi said yes, the couple went out to celebrate in Hollywood with close friends, including fellow Manchester United player Jesse Lingard.

It hasn’t all been plain sailing for the childhood sweethearts though. In 2021, the pair briefly broke up. It was reported that this was due to the pressures of lockdown, and the decision to part ways was mutual. But, a source shared with the Daily Mail that they had hopes of reconciliation further down the line. Those hopes were realised in January this year, when according to The Sun, they reunited.

The pair met when they were at school in Sale, Greater Manchester. Getting together when they were just 15 years old, they’ve been through FA Cup wins, World Cup disappointments, and even Rahford’s receipt of an MBE in October 2020. Rashford was included on the Queen’s birthday honours list for the amazing work he did during the pandemic when he confronted the government on their decision to cancel school meal vouchers during the school holidays. He also helped to raise over £20 million for charity FareShare, which is a charity that tackles food poverty in the UK.

Rashford is now an ambassador for the charity, and it holds a special place in his heart. As FareShare explain on their website: “His own family relied on breakfast clubs, free school meals and at times, food banks. Raised by mum Melanie Maynard, who worked full-time earning minimum wage, it was often not enough. As Marcus explains: “the system was not built for families like mine to succeed, regardless of how hard my mum worked.”

Loi works for a Manchester-based PR company, and secured herself a first-class degree in Marketing from Manchester Metropolitan University. But, she works hard and she plays hard, as she can be seen travelling, hanging out with friends and supporting Rashford over on her Instagram.

This article was originally published on Aug. 5, 2020