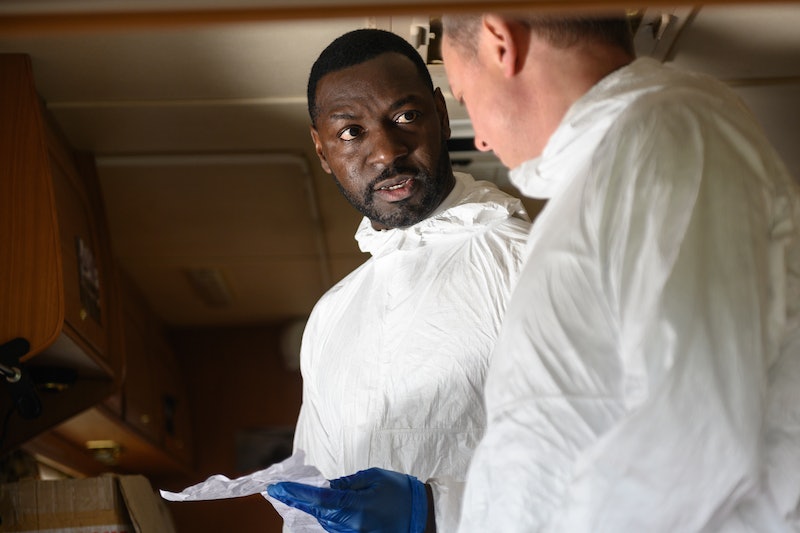 On March 14, ITVs newest detective drama will air with John Simm taking the lead. Grace is a TV adaptation of Peter James’ first novel in his Roy Grace series, Dead Simple. When the book was first released in 2005 it shot to fame for its mysterious story about four deaths and one suspect linking them all. It’s up to Roy Grace to solve the murders with the help of Detective Sergeant Glenn Branson. If you’re a fan of TV dramas it’s likely you’ll recognise the actor cast as DS Branson for ITV, Richie Campbell, so let’s take a dive into some of his career highlights.

Campbell grew up in North London and has previously said that acting was never something he seriously considered as a career until he did his A-Levels.

“I was offered an apprenticeship, and at the same time I was offered a part in a play. Slam Dunk would be touring for six months, and it was going to pay me enough to be able to pay off my student loan, I knew that’s what I wanted to do,” he told Theatre Weekly back in 2019.

Slam Dunk kick started his career in show business and once he’d wrapped up the shows, he took on the role of Dominic Hardy in ITV’s The Bill in 2006.

From there, things really took off. In 2010 he played Rocky in the BBC TV mini-series The Silence. He also branched out and took a role in teenage drama Waterloo Road in 2013. More recently he played Sergeant Nightingale in the Frankenstein Chronicles, Sam in Vanity Fair, and Chris in Top Boy.

Campbell is no stranger to the big screen either. He starred in huge films including Blue Story, The Mummy, and Tango One.

In his latest role for ITV, he’ll be playing a police officer once again. Grace tells the story of a series of mysterious deaths and disappearances and the people whose duty it is to solve them.

Campbell stars alongside John Simm, Reiki Ayola and Laura Elphinstone. In the first episode, viewers are introduced the DS Roy Grace and the problems he’s facing at work and home. When a man goes missing on a night out, he sets out with DS Branson to establish why.

Speaking about his latest role to BT, Campbell said:

“Branson enjoys watching Grace get back into the swing of things, especially after what Grace has been through. Branson has moved up the ranks and is ambitious to prove his worth but he is taking a risk by bringing Grace back. I think taking that risk demonstrates how strong their friendship is. There is a lot of heart towards who they are as people besides the police work. They started off as Grace, maybe being a mentor figure for Branson, but now they are real friends.”

One of the most notable things about Grace is that, while it was filmed in 2020, it’s set in a COVID-19 free world. This may have something to do with the fact that it’s based on a book. However, executive producer Paul Sandler told the Mirror, “The brief from ITV was this needed to be a real COVID-free world. We didn't want to see background artists with masks on, we didn't want to see signs outside shops or social distancing. So it was a great deal of thought that went into the processes and protocols of how we could deliver this safely, as that was the top priority for everybody.”

You can watch the first episode of Grace on ITV, March 14 at 8 p.m.