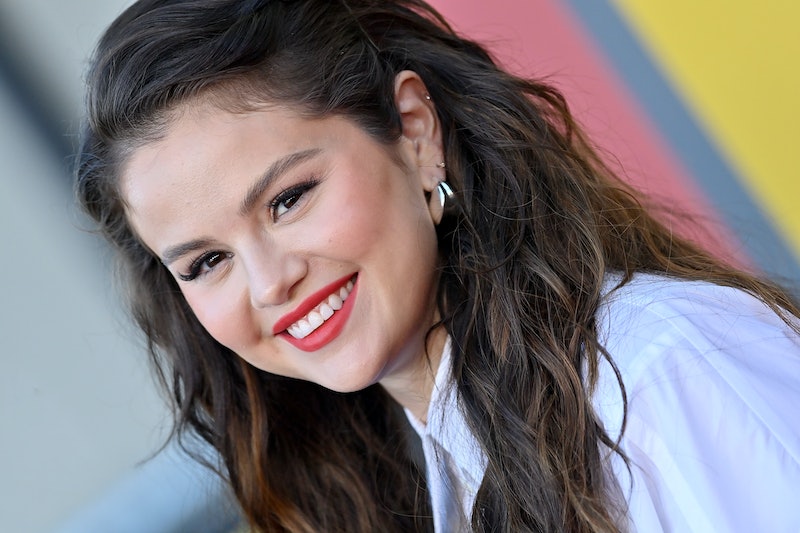 There are three things in life that are guaranteed: death, taxes, and dating rumors between any famous woman and the guys she just so happens to hang out with. Selena Gomez has had her fair share of those rumors, both legitimate and false, but the Only Murders in the Building star and Rare Beauty founder is not publicly dating anyone as of June 2022. But that doesn’t mean the 29-year-old singer isn’t looking for someone special.

In fact, Gomez used her Saturday Night Live hosting stint in May 2022 to manifest a relationship during her monologue, citing the show’s recent success in matchmaking. “I’ve heard that SNL is a great place to find romance,” she said. “Emma Stone met her husband here. Scarlett Johansson and Colin Jost. Pete and... Machine Gun Kelly. Since I don’t really want to try the dating apps, I just want to put it out in the universe that I’m manifesting love. And I would like to say that I’m looking for my soulmate, but at this point, I will take anyone.”

Fittingly, several SNL cast members lined up to shoot their shot, and after turning down Kyle Mooney and James Austin Johnson, Gomez clarified that she didn’t actually mean anyone. “I’m so sorry these men out here harassing you,” Punkie Johnson told her. “It’s just unacceptable, boo. You’re just out here doing your job, you know? Damn! But um... I’ll do it.” Hilariously, Gomez was feeling it. “Honestly, it’s kind of a vibe, but let’s see how the after-party goes,” she joked.

In March, Gomez posted a TikTok video of herself lip-syncing to a viral sound of a man flirting with an uninterested woman and confirmed her dating status. “Maybe this is why I’m single,” she wrote. “Don’t believe a damn word.” But of course, this hasn’t stopped fans from speculating about her love life. Most recently, in October 2021, rumors started swirling that Gomez was dating Captain America actor Chris Evans after the two were seen leaving the same Los Angeles studio. The same week, they were photographed reportedly leaving the same restaurant, sending fans into a frenzy. “I’m seeing things about Selena Gomez and Chris Evans being a thing...and yah know I’m not mad about it,” wrote one Twitter user before adding that they would make a “hot couple.”

Around the same time, fans noticed that Evans started following Gomez on Instagram, but the exact timeline of when he followed her is unclear. What is clear, however, is that the romance rumors are showing no signs of slowing down. Evans further fueled speculation in late October when he shared a TikTok of himself playing the piano. While zooming in on the video, one fan noticed a woman in the reflection of the piano lid. “Whose [sic] the brunette filming bottom right corner Chris?” they wrote.

Inevitably, fans of both Gomez and Evans were quick to comment on the video with their thoughts. ‘That could be a family picture on the piano,” one TikTok user wrote, suggesting it wasn’t a person in the reflection at all. Several others suggested that the woman could’ve been the actor’s sister, who also happens to be a brunette. Many other fans took to the comments with a reminder that Selena recently chopped her hair into a bob, so it simply couldn’t be her.

While Gomez and Evans may seem like a random pairing, the Revelación singer told Andy Cohen she was interested in the Marvel actor back in 2015 during an appearance on Watch What Happens Live. “I kind of have a crush on Chris Evans. Isn’t he cute? He’s very cute,” she told the host. Cohen informed Gomez that Evans’ “gay brother,” aka Scott Evans, had bartended on the show the week prior, and she replied, “Really? Last week? Maybe it’s meant to be.” Noting that it was the “first time” she admitted to the crush publicly, she said, “Oh man, he’s either going to hate me or love me.” If the rumors are at all true, chances are he doesn’t hate her.

In March 2022, rumors swirled again that she was dating entrepreneur Zen Matoshi when they were seen attending the Dua Lipa concert together. However, that rumor was quickly dispelled by a source close to Gomez, who clarified the duo as strictly friends. “They are friends,” the source said. “He works in the tech space and has been helping advise Selena.”

Back in February, Gomez set the internet ablaze when she was seen walking arm-in-arm with actor Aaron Dominguez while out in New York. It turns out they were only filming a scene for her Hulu series Only Murders In the Building, in which she stars alongside legendary comedians Steve Martin and Martin Short, but that didn’t stop fans from running rampant with the rumors. In fact, in an interview with the Los Angeles Times, Gomez said she worried that speculation about her love life would turn off potential suitors.

“We had just started working together,” she said about Dominguez. “I honestly thought, ‘No wonder guys don’t want to date me!’ I think people only care because I’m young, and the older I get, the less they’ll care. For now, it’s a part of the job that I don’t really like. I’m actually grateful that I’m not involved with anyone right now.”

Selena Gomez and Aaron Dominguez hang out while filming Only Murders in the Building in 2021.
Jose Perez/Bauer-Griffin/James Devaney/Getty Images

In December 2020, fans thought Gomez had a new beau after being spotted at dinner with NBA player Jimmy Butler by The Miami Herald. However, as her Wizards of Waverly Place character Alex Russo wisely said, “Everything is not what it seems.” Neither of them ever commented on the speculation, but E! News reported that Gomez was still single despite her reportedly hanging out with the athlete “a few times” in New York. “Jimmy asked her to go to dinner and they had a great time,” a source told the outlet. “It’s very casual and she’s open to seeing where things go, but isn’t settling down just yet.” The source also noted that “her friends want to set her up all the time but she has loved being single.”

Gomez's most recent public relationship was with on-and-off boyfriend Justin Bieber (again), which ended around March 2018, according to Cosmopolitan. Since then, she’s been linked to a couple of men, including One Direction’s Niall Horan and her reported ex-boyfriend Samuel Krost. According to Entertainment Tonight, after Gomez and Krost were spotted at dinner together in October 2019, she quickly hopped on Instagram to quell the speculation without mentioning any specific names. “I am not dating anyone,” she wrote on her Instagram Story. “I’ve been single for two years. I’m on God’s timing not mine.”

The singer has been very open about her love life in recent years, beginning with the late 2019 release of two songs that are widely believed to be written about Bieber. “Lose You To Love Me” is a soft ballad about how she needed to lose her ex to learn how to love herself, and “Look At Her Now” is a powerful number about her journey to the other side of her post-relationship pain. That song contains the lyric, “She knows she’ll find love, only if she wants it,” which makes her outlook crystal clear.

In a June 2021 interview with Vogue Australia, Gomez admitted that she has felt inferior throughout her love life, without naming names, an experience that inspired her 2020 album Rare, and later, her cosmetics line Rare Beauty. “I think most of my experiences in relationships have been cursed,” she said. “I’ve been way too young to be exposed to certain things when I was in relationships ... I felt so less than in past relationships, and never really felt equal.”

Gomez spoke on the Zach Sang Show in October 2019 about how she’s learned from her past relationships and knows what she’s looking for. “When you’re young, you have this codependency that you think is love, and then you have this addiction to the passion and the frustration with each other and you think, ‘Oh that's love.’ I believed that for a long time,” she said. Now that she’s been single for a while, she’s not looking for what she had in the past. “I want it to be real and I don't want it to be codependent, or messy, or lack of communication. When you get older, you find people who are actually right for you, that are actually on the same wavelength,” she said.

More like this
Selena Gomez Has Been Spotted Having Fun With A Top Film Producer
By El Hunt
Brad Pitt’s Recent Dating History Includes A German Model
By Brad Witter
Kourtney Kardashian Shares New Photos From Her & Travis' Courthouse Wedding
By Bustle Editors
Who Is Camila Cabello Dating? She's Getting Cozy With Lox Club CEO Austin Kevitch
By Radhika Menon
Get Even More From Bustle — Sign Up For The Newsletter

This article was originally published on November 24, 2019