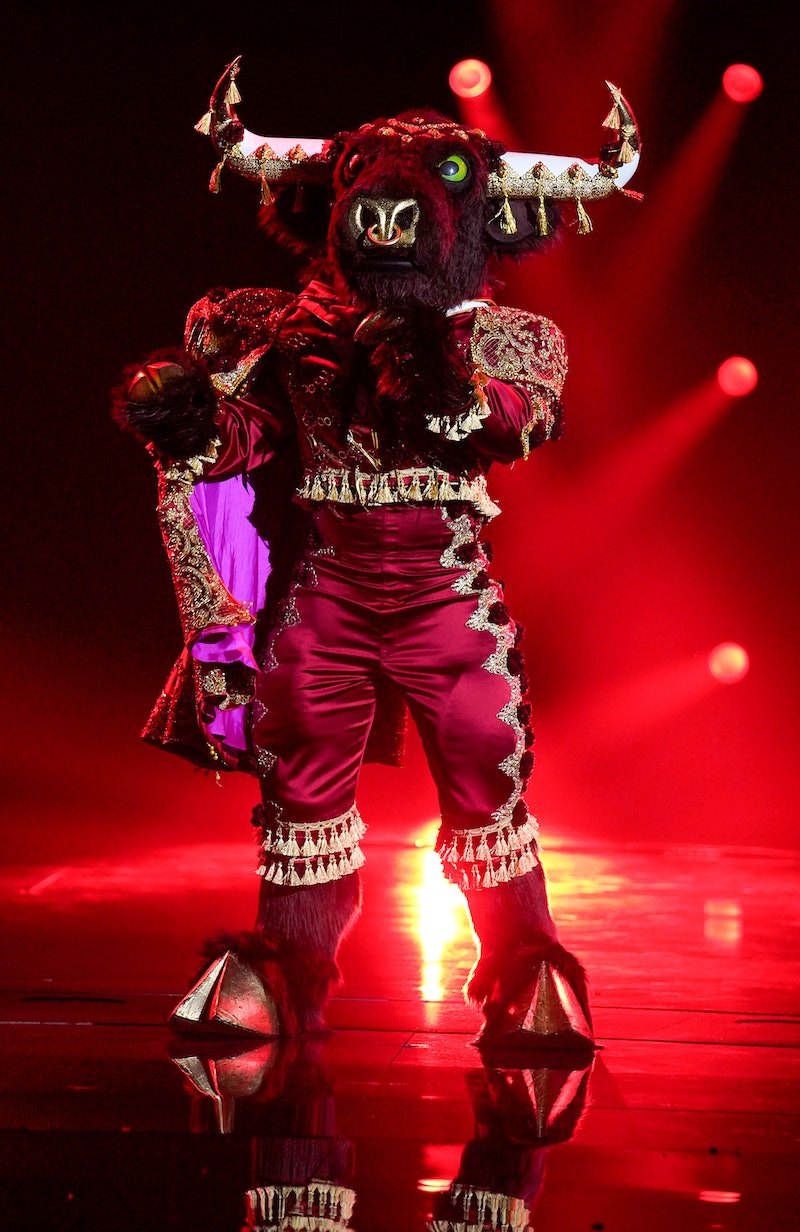 There are still a lot of performers left to unmask on The Masked Singer Season 6, but there’s one whose identity fans are convinced they’ve figured out: the Bull. As one of the strongest singers in the competition, he’s consistently impressed the judges with his renditions of Train’s “Drops of Jupiter” and Rascal Flatts’ “What Hurts the Most.” Judges have guessed Lance Bass and Dwayne Johnson, but there’s a ton of evidence that the Bull is actually Todrick Hall, a YouTuber turned professional singer and choreographer.

Though Hall has been guessed during almost every season of The Masked Singer, this time the Bull’s voice really does sound like him. On top of that, all of the Bull’s clues align with Hall’s story. In Episode 1, Bull explained that he grew up in a “small town surrounded by cows” and that the “doors [he] knocked on simply didn’t open.” He was rejected a lot, so he “became his own boss and eventually Hollywood and Forbes took notice.”

In Episode 2, Bull said that he felt the most free to “create his own world and put on shows” while in his garage, then flashed a sign of the Walt Disney Concert Hall. In Episode 4, he said he throws great parties and showed an image of Carnegie Hall. And in Episode 6, Bull said he left his “stable job” to chase his dream. After that, his world turned upside down. Though he lived in a terrible apartment, he said those hardships made him into the performer he is today.

Hall grew up in the farming town of Plainview, Texas and began his singing career starring in musicals. He eventually auditioned for American Idol — which could be what Bull’s “Hollywood” reference means — and made it to the Top 16 on Season 9. After Simon Cowell dismissively told Hall that he’d never amount to anything beyond being a Broadway actor, Hall took to YouTube. Just as Bull was his own boss, Hall grew his fanbase by posting viral videos of pop culture mash-ups like “The Wizard of Ahhhs” with the Pentatonix and a Disney remix of Justin Bieber’s song “Beauty and the Beat” — likely what Bull’s Disney Concert Hall clue is referring to. (Hall also created other viral Disney videos like “Disney Dudez” and “Cinderonce.”)

Eventually, Hall’s videos caught the attention of music manager Scooter Braun, and Hall choreographed a music video for Beyoncé. In 2014, he was listed on Forbes’ “30 Under 30 To Watch” list. He went on to guest-judge RuPaul’s Drag Race, release several albums, and sing at Disney+’s virtual Pride celebration.

And as one Reddit fan pointed out, Hall has worked with Nicole Scherzinger before, and he began the competition by singing directly to her. She appeared to quickly write down her guess and didn’t share it, suggesting she may secretly know it’s Hall inside the costume.

More like this
Every Celebrity From 'The Masked Singer' Season 8 Revealed Or Rumored So Far
By Gretchen Smail
The New Bachelor Will Be Announced Next Week & Here Are The Top Contenders
By Grace Wehniainen
‘RHOSLC’ Star Jen Shah’s Arrest & Legal Drama, Explained
By Brad Witter and Jake Viswanath
'RHOSLC’s Newest Cast Member Has Tried To Become A Housewife Before
By Jake Viswanath
Get Even More From Bustle — Sign Up For The Newsletter