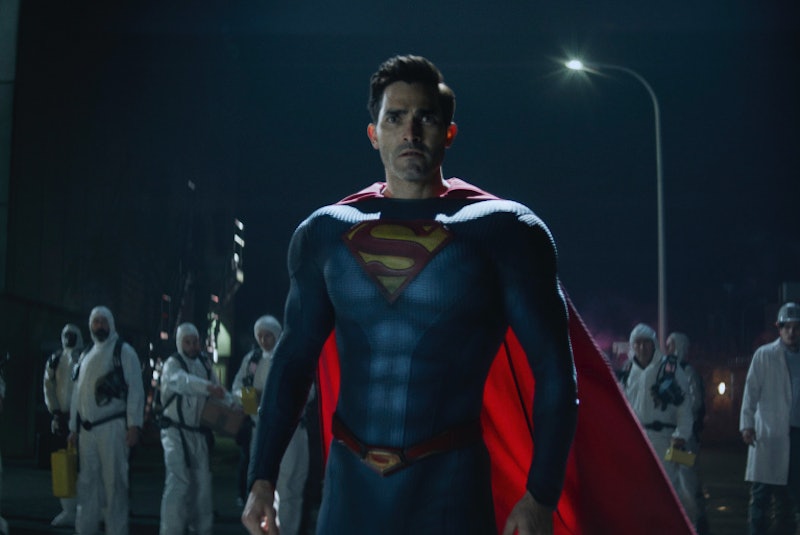 Spoilers ahead for the Season 1 premiere of Superman & Lois. Superman & Lois may be about Clark Kent moving back to Smallville to spend more time with his family, but that doesn't mean the supervillains are giving him a break. In the premiere episode, Clark discovers that there's a man triggering nuclear reactors in the hopes of getting his (or rather his alter ego Superman's) attention. The antagonist is initially known only as the Stranger (played by The Vampire Diaries' Wolé Parks), who claims he's not from Earth and that he's met Superman before.

According to Deadline, the Stranger is a mysterious visitor "hellbent on proving to the world that it no longer needs Superman." He appears to be highly intelligent, as he wears a bulky tech suit that can resist Superman's laser eyes and freezing breath. He also knows that Superman can't see through lead, and that his real name is Kal-El. "Where I come from, let's just say the two of us have history," the Stranger says. When Clark asks where that is, the Stranger responds with, "Nowhere now. My world was destroyed, but somehow I managed to survive."

The Stranger then stabs Superman with Kryptonite before zipping off to a fortress in the snow. At the end of the episode, he takes off his helmet and the ship's computer reveals his real name: Captain Luthor. This seems to confirm the long-running fan theory that the Stranger is actually Lex Luthor, Superman's primary nemesis.

Beyond his name, we don't know much about this Luthor. There is no Black Luthor in the comics, and he was only confusingly shaded as a darker skin tone in Superman: The Animated Series. This Lex Luthor is also completely separate from the one Jon Cryer played on Supergirl, who was a major antagonist in Supergirl Season 4 before the giant Arrowverse crossover event "Crisis on Infinite Earths" in Season 5 rewrote his criminal past. When the heroes collapsed the multiverse into one "Earth Prime," a lot of things changed. Clark ended up with two sons instead of one, for example, and Lex Luthor became a sort of hero for a time.

Cryer's Luthor may revert to his criminal ways in Supergirl Season 6, but that doesn't preclude the existence of two evil Lex Luthors on one Earth. The Arrowverse has yet to reckon with the consequences of crushing several parallel universes together, and Parks' Luthor is clearly from one of those other realities. It's unclear how Luthor managed to survive and retain his memories of his own Earth, but unsurprisingly, he sees Superman as the person who destroyed his home. And as he's made clear, he'll stop at nothing to take him down.