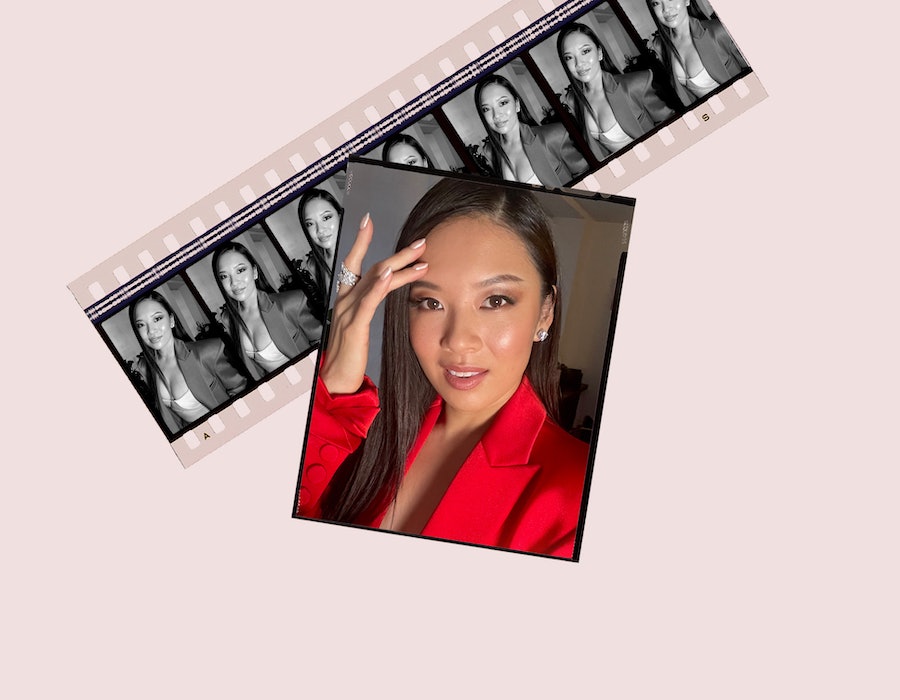 When Christine Ko auditioned for The Handmaid’s Tale — a show that had been on her vision board for years — she was exhausted. Thankfully, that was exactly the energy her character Lily, an ex-Martha and Mayday resistance fighter, required. “The way they described Lily was that she was really physically and emotionally depleted,” Ko tells Bustle. “And I was like, ‘I can do that.’”

The 34-year-old actor had just finished shooting an episode of Only Murders in the Building, in which she plays new Arconia president Nina Lin in Season 2. Her plane from New York City was landing back in LA late on the night the Handmaid’s Tale tape was due, but Ko was determined. So she threw on her boyfriend’s baggy sweater, called up a friend, and, sans makeup, made the recording for Lily with moments left to spare. “I just imagined what life would be like if I had to start fresh, be in this new world, and everyone that I knew was suffering,” she says of getting into Lily’s mindset. She got the part.

Despite having more than a decade of experience acting in LA, success still feels fresh to Ko. “It took a while to get my bearings,” she says of landing roles on two buzzy shows. “It's absolutely a luxury to be able to be on multiple shows, because there was a time when that one line on a show was everything. If you booked that in a year, man, you were so elated.”

If Ko had a guiding light all those years, it was her own perseverance mixed with the creativity and business savvy she got from her parents. She’s the daughter of an actor and Taiwanese singer Frankie Kao, though she was adopted by her education-oriented aunt and uncle when she was 3 and had a “normal” upbringing in Acworth, Georgia. “I didn't understand anything about the entertainment industry [back then]. My mom wasn't coming home from set, and I wasn’t visiting my dad at the recording studio,” she explains. Still, she dreamt of walking in her birth parents’ footsteps — even if, at the time, she had no idea what that entailed. “It really makes me think about nature versus nurture,” she adds.

Lately, she’s also been thinking about her purpose as an actor. After the Supreme Court overturned Roe v. Wade, The Handmaid’s Tale Season 5 feels more eerily prescient than ever. Ko says she relates to Lily and her urge to fight oppression. “It becomes a really scary place when we have people telling us what to do with our bodies,” she says. “I'm glad I'm playing a resistance leader, even if it is just a character. I want to be an ally to those who just feel like they don't have a voice.”

Get to know more about Ko in her Bustle Booth questionnaire below.

House of the Dragon

I love listening to SmartLess! There's an ease to their friendship and I really enjoy hearing honest conversations from people, especially in entertainment. It helps make everything feel more real when you hear firsthand experiences :)

There's a warmth to her that I enjoy.

More like this
Ismael Cruz Córdova Loves His Elf Ears
By Morgan Leigh Davies
'Grey's Anatomy's New Intern Got Advice From Dr. Bailey Herself
By Grace Wehniainen
At 28, Sharon Horgan Was Hoping To See Damon Albarn At The Pub
By Samantha Rollins
The 'Reasonable Doubt' Cast Includes A 'Save The Last Dance' Reunion
By Grace Wehniainen
Get Even More From Bustle — Sign Up For The Newsletter