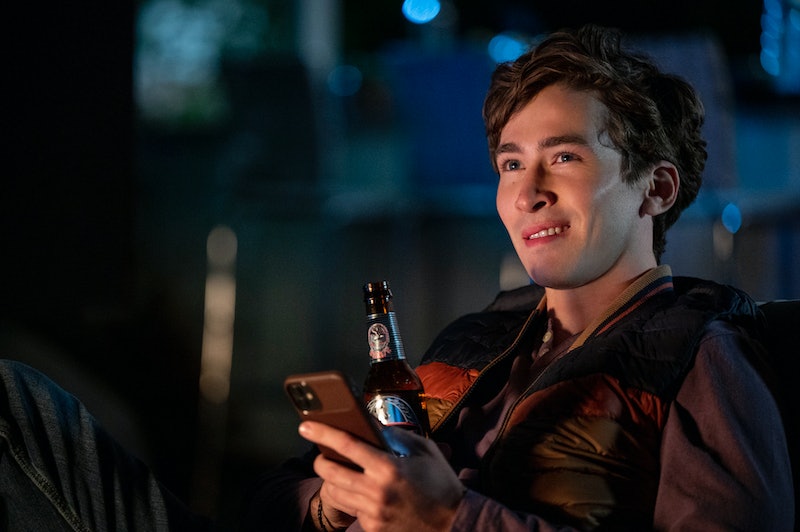 In Season 3 of Netflix’s hit thriller series YOU, Joe and Love move to the sunny Northern California town of Madre Linda, which introduces an entirely new cast of characters into their orbit. Unsurprisingly, the serial killer couple struggles to adjust to the stifling nature of suburban life and new parenthood, as well as Madre Linda’s nosy, fake-friendly neighbors. One of the Madre Linda locals is Theo, a college student who is described as having a “strained and complicated relationship with his stepfather.” The character is played by Dylan Arnold, a 27-year-old Seattle-born actor with a wide-ranging acting resume who graduated from the University of North Carolina School of the Arts.

Arnold’s first notable project came in 2017 in the form of a small role in the acclaimed Netflix film Mudbound. The next year, he had a recurring role in Season 6 of the nighttime soap Nashville, where he played Twig Wysecki, a friend to pop star Jonah Ford. Arnold’s breakout was in the 2019 film After — the romance movie that you may remember as being loosely based on popular Harry Styles fan fiction. Arnold played Noah, who’s quickly discarded by his high school girlfriend after she goes to college and meets mysterious bad boy Hardin (the Harry Styles type in the story). Arnold reprised his role in the film’s 2020 sequel, After We Collided. In recent years, he’s also guest-starred on television series including S.W.A.T. and The Purge.

In addition to his role in YOU this year, Arnold will reprise his role as Cameron Elam in Halloween Kills, the 2021 sequel to the 2018 slasher film Halloween, which is the 12th film in the long-running popular horror franchise. He’s not very active on Instagram, having not shared a post since December 2020. But his 90-plus posts include artsy black-and-white photos and polaroids, professional headshots, and pictures of him goofing around in Los Angeles. He appears to be particularly close with fellow actors Dylan McTee (Sweet Vicious; Roswell, New Mexico) and Zak Steiner (Euphoria, The Perfect Date), as well as his brother, dad, and mom, the latter of whom is a children’s video game designer and author who most recently released the book Hello There, I’m Coming Home in 2019.

“Happy Mother’s Day to the *most bestest* mom/role model I could ask for. I love you!” Arnold wrote to his mom in a nostalgic 2019 post.

More like this
Jeffrey Dahmer’s Arresting Officer John Balcerzak Got His Job Back After Being Fired
By Grace Wehniainen
'Firefly Lane' Season 2 Will Be The Show's Last — But There's A Twist
By K.W. Colyard and Grace Wehniainen
Twitter Is Pouring Out Some Zhampagne As ‘Schitt’s Creek’ Leaves Netflix
By Brad Witter
Here’s Where You Can Stream 'Schitt's Creek' After The Comedy Leaves Netflix
By Brad Witter
Get Even More From Bustle — Sign Up For The Newsletter