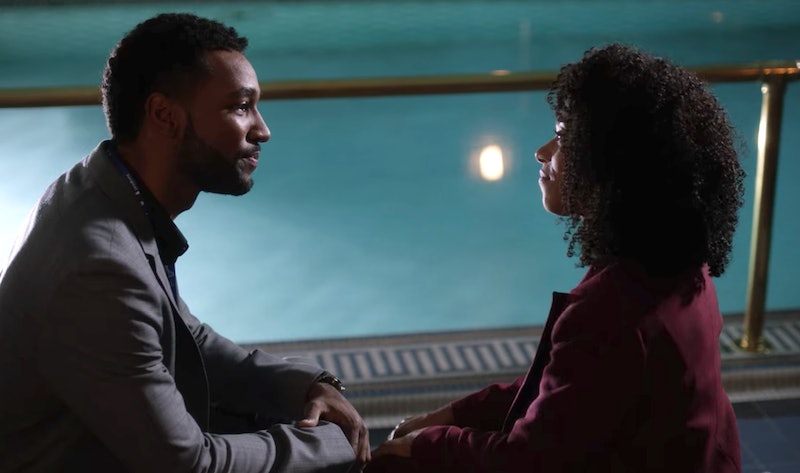 Sorry, #Jaggie shippers: Maggie has officially moved on from Jackson on Grey's Anatomy. She has a new love interest this season in Dr. Winston Ndugu — played by Anthony Hill — who she hooked up with in Season 16. "I think that the Jackson relationship was a real breakthrough... for her to finally be able to acknowledge, like, 'I don't know why I'm with somebody who doesn't like me,'" Kelly McCreary, who plays Maggie, recently told TV Line. "To me, [it was] the end of a pattern. [With Winston] she's allowed herself to be open and not to carry the baggage of that last relationship."

Maggie first started a relationship with Winston — who was a resident while she was at Tufts — after they ran into each other at a medical conference late last season. After Winston told Maggie that he'd always had a crush on her, the two got together and realized they have more in common than medicine — like the fact that they've both lost their mothers. Winston told Maggie that he felt so strongly about her, he thought one of them should move to where the other lived. But Maggie needed time to think about it, and that's where we left off.

In Season 17, the two will pick up their relationship long-distance. "Maggie and Winston are having a relationship that's playing out virtually," Hill told Entertainment Tonight. "Being able to play out a virtual relationship as we get to know each other, I'm happy about because I think that's an aspect of the [coronavirus] pandemic that hasn't been talked about very much ... It's a tough hurdle, and I think that it needs to be highlighted a little bit."

It sounds like it won't be long before the two see each other in person, though: the synopsis for the second episode of the two-hour premiere hints that "Winston surprises Maggie."

Whatever the case, it's a step up for Hill, who's mostly had one-episode roles in shows likeWatchmen, For the People, It's Always Sunny in Philadelphia, Fuller House, and more. Now he gets to buckle in and really develop a character over time as Winston charms his way into Maggie's — and fans' — hearts.

More like this
What’s New On Netflix: Ana De Armas’ 'Blonde' & A Nick Kroll Special
By Arya Roshanian
The 'Reasonable Doubt' Cast Includes A 'Save The Last Dance' Reunion
By Grace Wehniainen
Nicola Coughlan Shared A Lady Whistledown Excerpt From ‘Bridgerton’ Season 3
By Grace Wehniainen, Alyssa Lapid and Sam Ramsden
This House of the Dragon Character Will Create Another Scandal For Rhaenyra
By Kadin Burnett
Get Even More From Bustle — Sign Up For The Newsletter