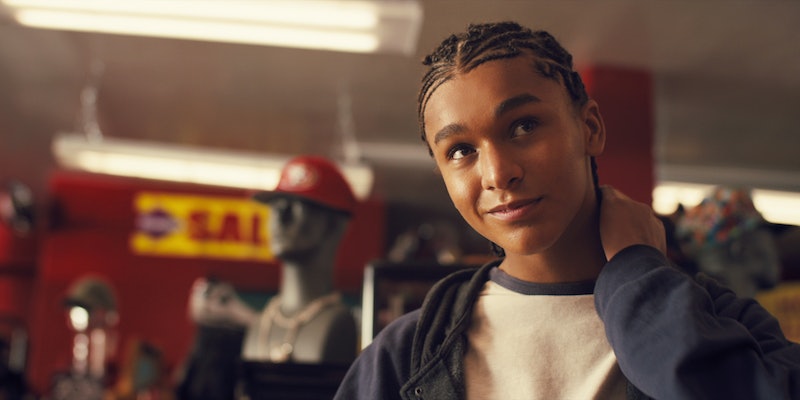 How do you memorialize a living icon? Actor Jaden Michael is figuring that out firsthand. The 18-year-old plays NFL star and activist Colin Kaepernick in Netflix’s Colin in Black & White, a miniseries chronicling the former NFL quarterback’s upbringing as a Black kid in a predominantly white environment. Kaepernick himself narrates the show, which is interspersed with dramatizations of his childhood.

Bringing those experiences to life was a big feat for Michael, as the series marks his first big starring role. But he’s far from new to acting. Growing up in New York City, he appeared in multiple roles as a child, including a handful of short films and episodes of Saturday Night Live and the Late Show with Jimmy Fallon. His first recurring role was as a character named Rafe on Netflix’s The Get Down, and he’s since had parts on Dora the Explorer, Blue Bloods, and The Bug Diaries.

During an appearance on The Drew Barrymore Show, Michael described the numerous awkward Zoom auditions it took for him to land his role in Colin in Black & White. He recalled thinking, “Whoever gets to do this role’s going to have a lot of fun, and I was like, ‘Oh wait, it’s me!’”

After securing the part, Michael got to know Kaepernick, who he’d looked up to as a kid. “He was a role model for me. My family, they love football, so I had known about his career,” Michael told Barrymore. “I wasn’t a huge sports guy, so I wasn’t as invested as my family was, but when I saw him kneeling it completely changed how I looked at him and how I viewed him.” Michael added that athletes are usually told to keep their heads down and focus on their athleticism, so he was impressed that Kaepernick took a stand for what he believes in. “I’ve always been someone who, if you have any sort of influence over a group, you should use it for change, for positive change, and he personally embodies that.”

To prepare for the role, Michael fasted for a month to achieve the leaner frame Kaepernick had in high school. In early scenes, he hunched over his shoulders to appear smaller, then started working out and eating more as filming went on to appear bigger and more physically imposing. More importantly, though, he wanted to dig into Kaepernick’s emotional core.

“The true audience is people who don’t understand him yet, the people who misunderstand or misinterpret what his meaning is,” Michel told Barrymore of Kaepernick. “I wanted to build a Colin that could be edible for different people, people who have different political point of views. Even if you don’t agree with his politics, how he expressed himself, how he stood up for other people, maybe you can come to respect the amount of selflessness that he had.”

During an interview on The View, Michael revealed he was initially apprehensive about attaching his name to such a polarizing figure and story, but realized that was ultimately the reason to do the project. “If I’m afraid of standing up for myself, this is exactly why we need to have this conversation” he said.

Activism appears to be a commonality between Kaepernick and Michael, who mentioned his work at the UN and Unicef, where he’s given speeches about children’s rights. He also told ET Canada that he related to Kaepernick’s story and upbringing. “The big inspiration for me was realizing how much of our history intertwined,” said Michael, who is Afro-Latinx. “There’s a deeper conversation there about how we both are growing up and realizing that we both kind of alienated from parts of our culture, parts of American culture and American society.”