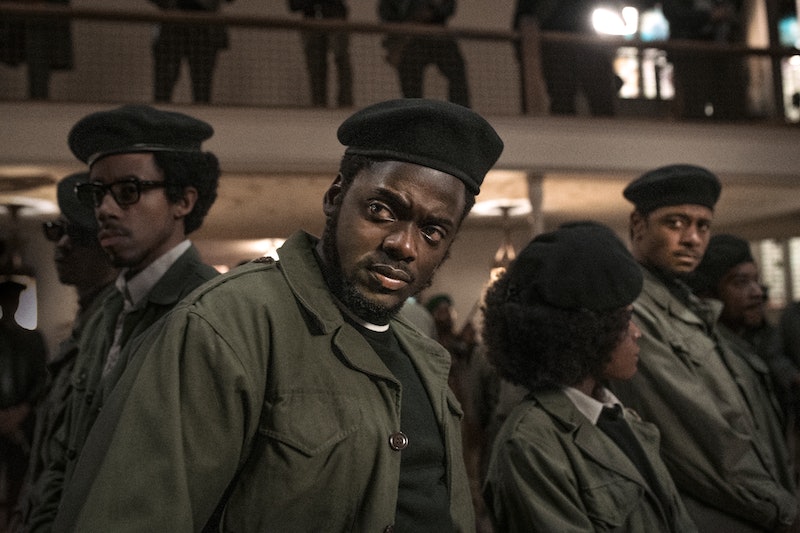 Daniel Kaluuya co-starred in 2018's Black Panther and now plays a historical Black Panther in Judas and the Black Messiah, hitting HBO Max on Feb 12. Directed by Shaka King, the film stars Kaluuya as Black Panther Party Chairman Fred Hampton and LaKeith Stanfield as William O'Neal, Hampton's security guard and an FBI informant that was planted in order to bring Hampton down. The film begins in 1968 when O'Neal first joins with the Illinois chapter of the Black Panthers in Chicago and ends with Hampton's death at the hands of the FBI. But who was Fred Hampton? His story still resonates 50 years later.

"Started by Black Oakland college students [Bobby] Seale and Huey Newton in 1966, the Black Panther Party for Self-Defense attracted great interest and membership in cities across the country," The Chicago Tribune writes. Hampton had been a rising star in the NAACP, raising the membership of the suburban youth chapter from seven to 700. In 1968, however, he shifted his focus from the NAACP to the Black Panthers and quickly rose to become Chairman of the Illinois chapter. At the time, he was just 20 years old.

Judas and the Black Messiah spans the year during which O'Neal acted as the head of security for the Illinois chapter of the Black Panther Party while simultaneously serving as an informant for the FBI. O'Neal's involvement would eventually lead to a 1969 FBI raid of Hampton's apartment, during which Hampton and another member, Mark Clark, were killed.

Kaluuya dove into researching the true story of Hampton, visiting his hometown, seeing his school and childhood home, reading and listening to stories, he says in the film's press notes. Kaluuya also worked on Hampton's recognizable voice and accent. "I'd wake up in the morning and listen to a Malcolm X speech while showering; I read that Chairman Fred listened to speeches of Martin Luther King and Malcolm X to get auditory ideas. I’d watch footage of him during meals...I had worked three months with a dialect coach. I took up smoking to get a certain texture to my voice. I took singing lessons with an opera singer, to study breath and vocal control, preparing for his theatrical kind of performances, knowing that I'd be doing his speeches maybe ten hours in a day...It all contributed to building this important character."

But that was all after he learned more about the Black Panthers themselves, he tells Jemele Hill in Spotify's Jemelle Hill is Unbothered. "I didn't want to focus on him as an individual until I understood the thinking of the party," Kaluuya says. "Understood the ideas and concepts they were discussing and sharing and educating people on."

Kaluuya spoke with former Black Panthers to get some more insights. "It was amazing," he tells Hill. "I got a window into a perspective that you don't usually see in the mainstream anymore...it was invaluable. I don't think I could have done this project without speaking to some ex Panthers."

Kaluuya acknowledges that Hampton's story is controversial and that Judas and the Black Messiah takes an empathetic look at the man, but tells Entertainment Tonight that it's a needed perspective. "For me, the dignity of the man, the elegance of the man, this is who he was. This is the truth. This is what it is, you know? That's the importance of narratives being from an empathetic perspective, that eye that understands that point of view, that understands that way of life. And so, I saw it as an incredible opportunity to be a vessel for that and to serve that and to understand, I'm going to look with the Black Panther Party not at the Black Panther Party."

This article was originally published on Feb. 12, 2021