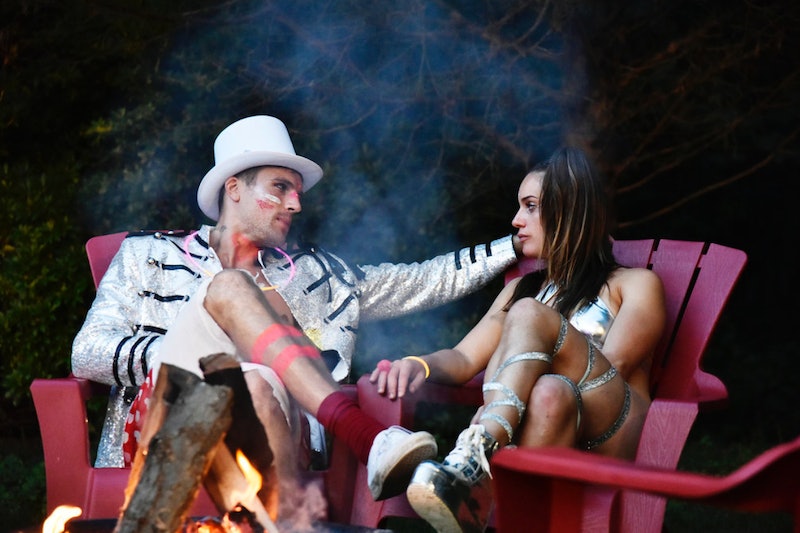 What a difference a year can make. At the end of Summer House Season 4, Luke Gulbranson and Hannah Berner finally seemed to be ready to pursue a genuine relationship. But fast forward to Season 5, and they're no longer together. So what happened in between?

Thankfully, Hannah has been very vocal about why their romance fizzled out. After filming Season 4, their feelings started to dissipate, and things only got worse when the show started airing in February 2020. "At one point, I was like, don’t talk to me," Hannah revealed in a May 9 episode of The Daily Dish podcast. "During the season, we didn’t talk for two and a half weeks."

The two stopped speaking right before Season 4's May 6 virtual reunion, during which they were semi-cordial but not necessarily friendly. Luke also admitted that Hannah never visited Minnesota as planned. "I feel like things kind of trailed off, but not trailed off in a bad way," he said of their relationship. Hannah responded, explaining that she got "bored" with their lack of intimacy. "I think there's a difference between chemistry and compatibility," she said. "I think he's a great person, but I don't know if I could trust him as boyfriend material."

Shortly after the reunion, Luke called Hannah to patch things up. "We’re still in just this kind of complicated place where like we love each other, we care for each other. We are very attracted to each other," Hannah explained on The Daily Dish. "But, it’s not in a place where I think either of us want to date."

By May 14, they appeared to be on good terms, as Hannah posted a photo with Luke and thanked everyone involved with Summer House Season 4. "Even though we got into a stupid fight before the reunion, Luke and I are good now," she wrote. "I don’t know who he is going to be in my life, but I’m fortunate to have met someone so good looking."

A few months later, Hannah went public with her new relationship — she's dating and living with 44-year-old comedian Des Bishop. Per Entertainment Tonight, they met on Instagram and were actually together during the quarantined filming of Summer House Season 5.

That should mean Hannah is completely over Luke, right? According to the Season 5 trailer, that may not be the case. "We dated for seven months and you f*cking rub her in my face to make me feel bad?" she says in one clip, referring to new cast member Ciara, who joins the house as Luke's "friend." "I don't know what world you're living in, but it's not reality," Luke yells.

Where the exes stand at this moment is still sort of unclear, but Hannah promises that Season 5 will provide the closure fans are looking for. "Everything gets answered," she told ET. "Don't worry."