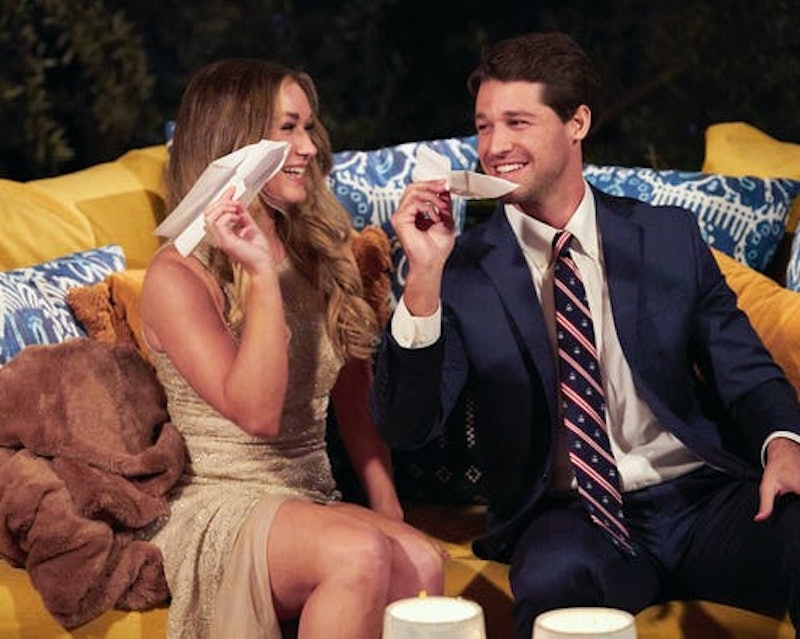 This season of Bachelorette is already shaping up to be full of drama. It’s only *checks notes* Episode 4 of the reality show and Hayden Markowitz, aka the first villain of the season, has already insulted both leads Rachel Reccia and Gabby Windey several times, called them names, and lied about it. Finally, after a string of misdeeds, Rachel finally sent Hayden home.

Why Did Hayden Get Sent Home?

It all started after the Leisure executive from Tampa, Florida rejected Gabby for Rachel in Episode 3 and explained that it was because Gabby was “rough around the edges.” (Gabby even brought up how upset she was about that comment on her next one-on-one date.)

By episode 4, Hayden continued to make unkind comments about both women. While talking to some of the boys, he compared the leads to his ex, saying “they don’t hold a candle to her.” He also started calling them b*tches.

Before the rose ceremony, Meatball pulled Rachel to tell her about the comments Hayden made. “He made a vulgar comparison,” Meatball started, talking about Hayden’s comments about the leads’ breasts. He also relayed one of Hayden’s lines: “I don’t trust these bitches.”

Rachel immediately pulled Hayden aside to confront him. She asked, “Did you make comments comparing me to your ex? Comparing my boobs to your ex?” And Hayden immediately denied the allegations saying, “I don’t speak like that, that’s not my character.”

At that point, Rachel had had enough and asked if he could walk him home. “I feel really stupid for giving Hayden the benefit of the doubt,” she said in a confessional.

After Hayden said those things, Twitter immediately called him a red flag and rallied behind The Bachelorette contestant. “The audacity levels are off the charts considering he said this on camera and still lied to her face,” one user wrote.

Some fans compared him to “Grocery Store Joe,” another Bachelorette personality.

Other fans called his behavior toxic and wished him a “long, exhausting plane ride back in economy,” from Paris.

Fans rooted for Rachel, and even wished Hayden’s ex well.

Fans also cheered for Meatball, who told Rachel about Hayden’s inappropriate commentary. “Only one man can save us from Hayden,” a user wrote with a picture of a meatball.

More like this
Bachelorette Gabby Kissed Her New Fiancé On 'Dancing With The Stars'
By Jake Viswanath
Erich Addressed His Text Message Scandal & Twitter Is Divided
By Kadin Burnett
So... When Are Gabby & Erich Getting Married?
By Kadin Burnett
Here's Exactly When Rachel & Tino's Fight Happened After 'The Bachelorette'
By Grace Wehniainen
Get Even More From Bustle — Sign Up For The Newsletter