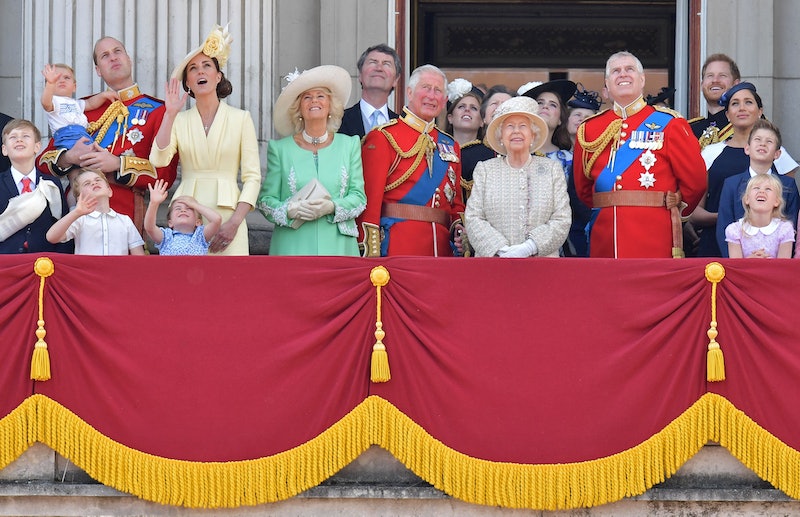 During the 30-second trailer to Meghan Markle and Oprah’s highly-anticipated interview, we hear Meghan refer to the royal family as "The Firm." While the Windsors' nickname is not entirely unknown (it is a term widely used by royal biographers, experts, and commentators), it has spurred many to ask what “The Firm” means and where the nickname comes from.

Where Did The Royals' Nickname “The Firm” Come From?

In 2005, journalist Penny Junor wrote The Firm: The Troubled Life of the House of Windsor, in which she claims Prince Philip came up with the nickname. "Prince Philip calls it 'The Firm,' and all the royal executives and their powerful associates are supposed to make every effort to avoid even a hint of scandal that could diminish the reputation of the family business."

Per the New York Times, “The Firm” dates back to Queen Elizabeth II’s father, King George VI, who ruled from 1936 to 1952 after his brother abdicated the throne, and his famous quote: "British royals are 'not a family, we're a firm.'" The same quote is used in 2010’s The King's Speech, with Colin Firth delivering that exact line.

There are many examples of the nickname being used in the media and the wider culture generally. When Josh O’Connor was cast in The Crown in 2018, he said he was thrilled to be joining "The Firm." The Netflix series uses the nickname regularly.

Why Is The Royal Family Called “The Firm”?

In a way, the self-aware nickname is a very British way of acknowledging that the family’s business interests are inextricably linked to its reputation, per Junor's Prince Philip thesis. Ultimately, it hints at the way in which the House of Windsor is primarily concerned with the preservation of the crown, i.e., the family business.

"British royals are 'not a family, we're a firm.'"

In Edward Owen's 2018 book, The Family Firm: Monarchy, Mass Media, and the British Public, he investigated the palace's shift in PR strategy between 1932 and 1953. In the midst of the Second World War and the abdication of King Edward VIII, the crown needed to restore public confidence in the monarchy, and the country needed stability. The monarchy's PR strategy did both.

"The monarchy's deliberate elevation of a more informal and vulnerable family-centred image strengthened the emotional connections that members of the public forged with the royals, and that the tightening of these bonds had a unifying effect on national life in the unstable years during and on either side of the Second World War," wrote Owen. The rest, as they say, is history.

In the royal family hierarchy, the line of succession is obviously key, but there is also an "inner circle," which is the senior working royals who are trusted (and required) to represent the queen and the crown in an official capacity. There are members of the royal family, like Princess Eugene and Princess Beatrice, who have titles, but are not seen as working royals. The same goes for Prince Philip, who retired in 2017. Prince Harry and Meghan Markle we know stepped down from their roles in 2020, and Prince Andrew was relieved of his royal duties following the controversy surrounding his connection to convicted sex offender Jeffrey Epstein.

Per the Observer, the “New Firm” was officially revealed in December 2020 at a socially-distanced event to thank key workers during the pandemic. The New Firm includes The Queen (obviously), Prince Charles and the Duchess of Cornwall, the Duke and Duchess of Cambridge, Prince Edward and the Countess of Wessex, and Princess Anne, the Princess Royal. These are the senior members of the royal family you can expect to see attending events and ceremonies more in the future.

What Is “The Firm” Worth?

There is no doubt that the royal family is a business. According to the Sunday Times 2020 Rich List, the queen's net worth is reportedly £350 million. Forbes estimates the value of the monarchy to be in the billions.

But it is also worth mentioning that the royal family is funded by taxpayers, too. Per British Heritage, accounts for the Sovereign Grant (which funds the Queen and her household’s official expenses) show the monarchy cost the taxpayer £67m during 2018-19.

Why Is It Such A Big Deal That Meghan Used "The Firm" Publicly?

In a sneak peek of the landmark interview, Oprah asks Markle how she feels about the Palace hearing her "speak [her] truth today." Meghan’s reply – "I don't know how they could expect that, after all of this time, we would still just be silent if there is an active role that The Firm is playing in perpetuating falsehoods about us." – sent shockwaves across the pond.

While the nickname is regularly used by royal biographers, experts, and commentators, it is rarely used by the royal family publicly to refer to themselves. Having stepped back from their senior royal roles, Meghan and Prince Harry are no longer part of the "The Firm" officially, but once were.

Is Meghan's Use Of "The Firm" A Reference To Diana's 1995 Interview?

The use of the nickname has also elicited certain comparisons to Princess Diana's 1995 Panorama interview, when the late Princess of Wales referred to the royal family as "the establishment." When Martin Bashir asked whether she thought she would ever be queen, she replied: "I'd like to be a queen of people's hearts, in people's hearts, but I don't see myself being Queen of this country. I don't think many people will want me to be Queen."

She continued: "Actually, when I say many people I mean the establishment that I married into, because they have decided that I'm a non-starter."

Oprah and Meghan's 90-minute interview, Oprah with Meghan and Harry: A CBS Primetime Special, will air on CBS on Sunday, March 7, at 8 p.m. ET, and in the UK on ITV on Monday, March 8, at 9 p.m.