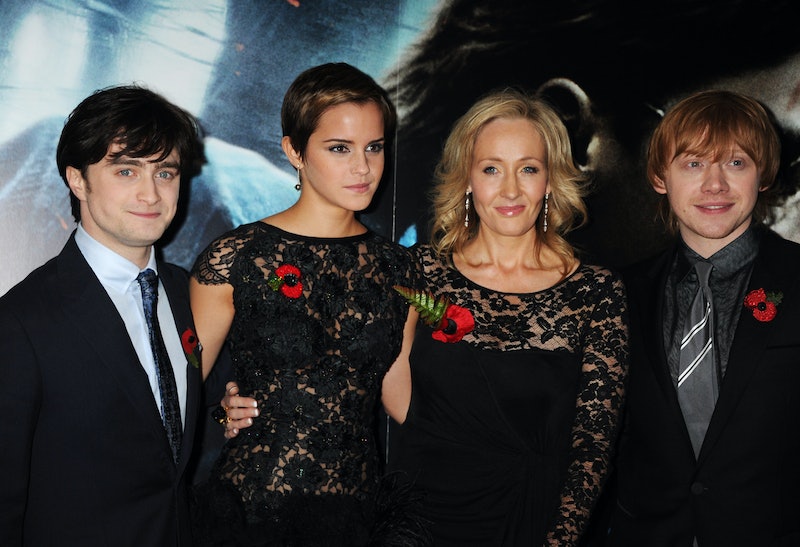 For Potterheads everywhere, being a Harry Potter fan got significantly more complicated in 2020. That’s when author J.K. Rowling tweeted several transphobic remarks, including the question of “if [trans people] were discriminated against on the basis of being trans.” In the wake of Rowling’s tweets, which first surfaced in 2019, the central trio of Harry Potter stars — Daniel Radcliffe, Emma Watson, and Rupert Grint all criticized Rowling’s transphobic tweets. The fandom also largely turned their back on the author, asking that she not be part of a Harry Potter spinoff series in development at HBO Max. Now, in an interview with Esquire, Grint revealed why he condemned Rowling’s tweets.

Back in June 2020, Grint released a statement supporting the trans community. He told the UK’s The Sunday Times, “I firmly stand with the trans community and echo the sentiments expressed by many of my peers,” the statement began. “Trans women are women. Trans men are men. We should all be entitled to live with love and without judgment.” Less than a year after denouncing Rowling’s tweets, Grint told Esquire to publicly say nothing would’ve spoken volumes. “Sometimes silence is even louder,” he said, adding, “I felt like I had to because I think it was important to.” Grint also explained that though he’s “not an authority on the subject” of trans rights, “it's a valuable group that I think needs standing up for.”

The 32-year-old, who played Ron Weasley in all eight Harry Potter films, said that he’s still appreciative of all the opportunities that Rowling’s work afforded him. “I am hugely grateful [for] everything that she's done,” Grint told Esquire. “I think that she's extremely talented, and I mean, clearly, her works are genius. But yeah, I think also you can have huge respect for someone and still disagree with things like that.”

The actor was the third of his lead costars to criticize Rowling’s comments, following Watson and Radcliffe. “Trans people are who they say they are and deserve to live their lives without being constantly questioned or told they aren't who they say they are,” Watson tweeted on June 10, 2020. The day prior, Radcliffe issued a strong statement to The Trevor Project, which read in part, “Transgender women are women. Any statement to the contrary erases the identity and dignity of transgender people...”

As for whether or not Grint would ever return to the Harry Potter franchise as Ron, he told Esquire that he “can’t really imagine” himself reprising the role. However, he may be more open to the idea if Watson and Radcliffe were on board. “I think going back now would be... I mean, never say never,” he told the outlet. “It would only be if everyone else wants to do the same. But yeah, no… I think just leave it.” In addition to the aforementioned HBO Max series, Warner Bros. is reportedly developing a film adaptation of Harry Potter and the Cursed Child, the stage production that debuted on London’s West End in 2016 before its Broadway bow in 2018.

More like this
Lin-Manuel Miranda & Tituss Burgess React To 'Little Mermaid' Casting Backlash
By Radhika Menon
Margot Robbie Breaks Her Silence On *That* Viral 'Barbie' Moment
By Maxine Harrison
A New 'And Just Like That' Table Read Pic Confirms A Key Character's Return
By Jack Irvin and Grace Wehniainen
‘RHOSLC’ Star Jen Shah’s Arrest & Legal Drama, Explained
By Brad Witter and Jake Viswanath
Get Even More From Bustle — Sign Up For The Newsletter