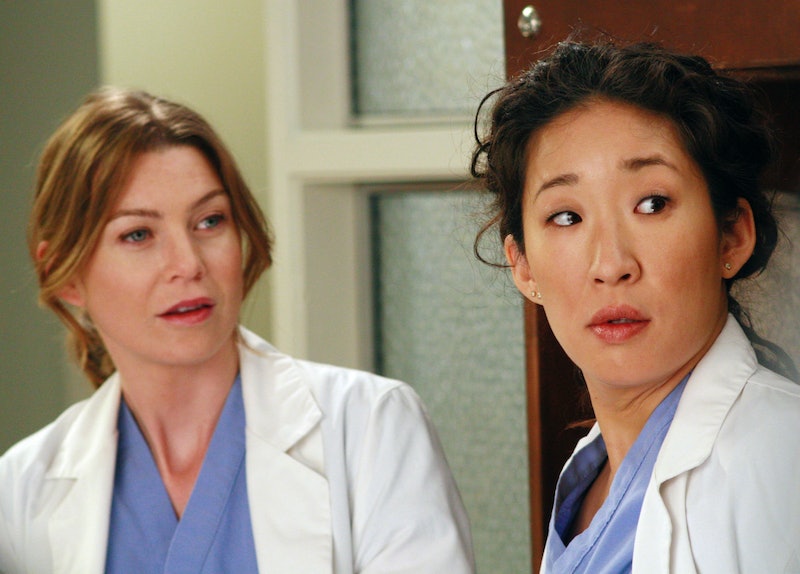 Spoilers ahead for Grey's Anatomy Season 17. For an hour dedicated to Teddy, the name Cristina Yang seemed to be on everybody’s lips in Grey’s Anatomy’s March 25 episode. So naturally, fans are beginning to wonder if this will finally be the year Cristina returns to Grey’s Anatomy. Let’s examine the evidence.

During the episode, a near-catatonic Teddy relived her past trauma in a series of visions. Of course, Cristina’s name came up as she looked back on her tumultuous relationship with Owen, and we even got a glimpse of Dr. Yang in one snowy flashback scene. Insecurities over Owen’s exes were clearly plaguing Teddy’s subconscious, as another of her dream sequences imagined him getting texts from Amelia and his ex-fiancée Beth in the middle of their wedding ceremony (which DeLuca was officiating because why not?). “Cristina’s bought us tickets to Switzerland as our wedding present,” Owen — almost tearfully — told her, eagerly planning their trip to go stay abroad with his ex.

Meanwhile — very much back in reality — Amelia had her own Cristina-related truth bomb for Owen. “Do you walk around telling everyone how you strangled Cristina?” she asked her ex in a heated moment while trying to convince him to be more understanding of Teddy’s PTSD. Amelia’s point? Everyone processes trauma differently, and she even called out Owen for just being pissed that Teddy “has a Cristina” like he does. (She was referring to Teddy’s once-secret love Allison, played by Sherri Saum, who died during the Sept. 11 attacks in New York City.)

So what does this all mean? Will Grey’s really bring back Cristina? Though choosing her words carefully, actor Kim Raver — who plays Teddy — may have dropped a clue when she singled out Sandra Oh as the Grey’s alum she’d most like to see return this season. “For Teddy and Cristina to be able to have scenes together again would be incredible,” Raver told E! News. “I have to be very careful with the way I talk because I don’t want to give anything away, but I will say it’s just amazing to have the cast members that were here before return because I think we all do feel connected.”

If there were ever a season to bring someone back whose return you’d thought to be impossible, this is the one. Already, Grey’s Season 17 has included the comebacks of Derek Shepherd (Patrick Dempsey), George O’Malley (T.R. Knight), and, thanks to Teddy’s visions, even DeLuca (Giacomo Gianniotti) has already reappeared after his recent death. ABC also previously announced that Sarah Drew’s April Kepner will return sometime this season, and, as revealed in the post-credits promo, Chyler Leigh will next reprise her role as Lexie Grey, appearing on Meredith’s beach in the April 1 episode.

During their beach reunion earlier in the season, George also reminded Meredith that, unlike him, Cristina is still alive. A bit of foreshadowing perhaps? Though Grey’s executive producer Meg Marinis insisted to Bustle in December that those Cristina references weren’t necessarily indicative of “any future storytelling,” her co-EP Andy Reaser did explain that they’re intentional. “We love all these characters and we love the people who play them, so we want to keep that sense of real involvement in one another's lives, even if cast members have moved on to other things,” Reaser said.

Plus there are some obvious opportunities plot-wise. Now that Meredith’s surgeon has been temporarily sidelined by a mental health crisis, who better than Cristina to save her “person”? And let’s also not forget that Cristina is the one who sent Meredith a “McWidow” (who’s looking very likely to be her next love interest, by the way). Plus, on a morbid note, would Cristina really miss Meredith’s funeral, should it come down to that?

Oh, for her part, hasn’t offered any hints either way, having given several different answers over the years on a potential Grey’s return. But she’d never spoil the surprise anyway.