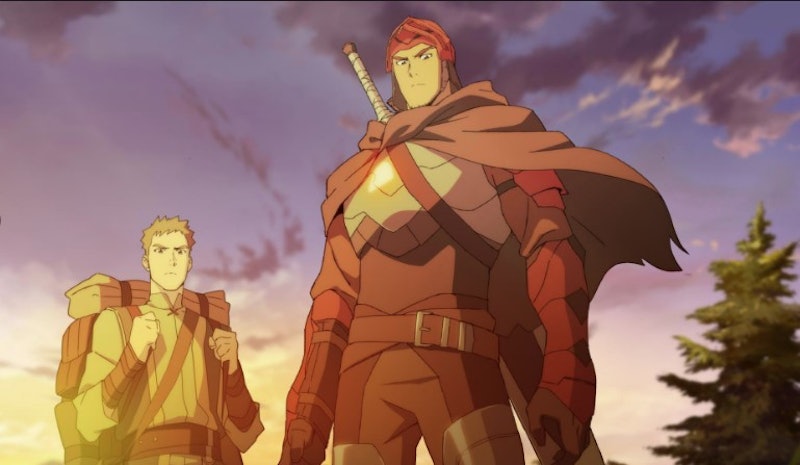 Netflix has yet to renew Dota: Dragon’s Blood for a Season 2, but animatic editor Robert Meyer Burnett recently revealed that there could be many more episodes on the way. Although the R-rated anime adaptation’s freshman season only includes eight episodes, Burnett confirmed during his Feb. 16 Robservations YouTube webcast that the last Dota: Dragon’s Blood episode he’s working on is number 24, so that means even a third season could be in the works as well.

It doesn’t hurt that the fantasy series had a built-in fan base even before its premiere. As multiplayer online battle arena gamers are well aware, the Netflix original anime is based on Valve’s wildly popular Defense of the Ancients (Dota) and its Dota 2 sequel, which still regularly exceeds 11 million active monthly users, almost eight years after its July 2013 release. That could also explain why the Dota: Dragon’s Blood trailer racked up more than 2 million YouTube views in the three weeks following its March 1 drop. (Another version of the trailer explains the broader Dota lore, for anyone who might be confused.)

The first season of the fantasy series follows the trials of renowned Dragon Knight Davion (voiced by Yuri Lowenthal). “Following encounters with a powerful, ancient eldwurm as well as the noble Princess Mirana on a secret mission of her own, Davion becomes embroiled in events much larger than he could have ever imagined,” Netflix’s official synopsis read. In addition to Lowenthal, the other voice cast actors include Lara Pulver (Mirana), Troy Baker (Invoker), Josh Keaton (Bram), Tony Todd (Slyrak), Kari Wahlgren (Luna), Alix Wilton Regan (Selemene), Anson Mount (Kaden), Freya Tingley (Fymryn), and Stephany Jacobsen (Daysi).

Showrunner and executive producer Ashley Edward Miller, whose writing credits include X-Men: First Class and Thor, penned the series for Studio Mir, the animators behind The Legend of Korra and Netflix's Voltron reboot. “Fans will love how we’ve imagined the DOTA 2 universe and woven together an epic, emotional, and adult-oriented story about some of their favorite characters,” Miller said in a February statement via Deadline. “The cinematic animation, acting and music are simply next level and I’m grateful to Valve for supporting our creative ambitions.”

The bad news for fans of the game? Netflix’s adaptation is “woefully short on Easter eggs and cameo appearances from other characters,” according to Yahoo contributor Bryan Tan’s review. Although Tan — a self-described “hardcore Dota 2 player” — described the adaptation’s art style as being “reminiscent of Netflix’s Castlevania,” which got a Season 4 renewal last year, he opined that Dragon’s Blood is “unfortunately nowhere close in terms of execution, dialogue and plot.”

Outside of Davion’s narrative, however, the Dota games include more than 100 characters, each with their own unique story, so there would be plenty of material to draw from moving forward. Though Netflix hasn’t said as much just yet, fans can likely expect more Dragon’s Blood, and/or other Dota content, either way.

More like this
Nicola Coughlan Shared A Lady Whistledown Excerpt From ‘Bridgerton’ Season 3
By Grace Wehniainen, Alyssa Lapid and Sam Ramsden
'Heartstopper' S2 Just Welcomed Four Brand New Cast Members
By Nola Ojomu and Sam Ramsden
The ‘You’ Season 4 First Look Shows Joe’s New Identity And Potential Victims
By Bustle Editors
Devi Is Going To Meet A “Smoldering Bad Boy” In ‘Never Have I Ever’ Season 4
By Jack Irvin and Gabrielle Bondi
Get Even More From Bustle — Sign Up For The Newsletter