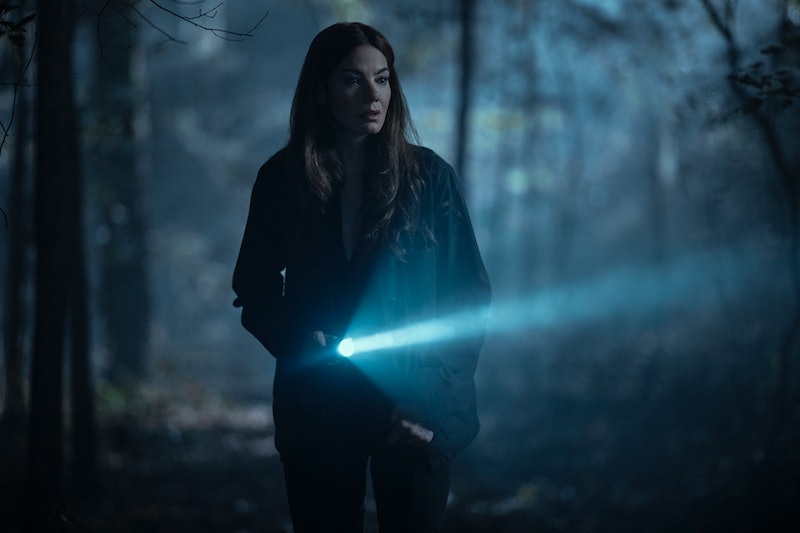 Major spoilers for Echoes Season 1 ahead. Echoes, the latest Netflix series, promises some Gemini hijinx for mystery thriller fans everywhere. The show stars Michelle Monaghan in dual roles as twins Leni and Gina, who share a sinister secret. The sisters have spent most of their lives switching places, culminating in each twin having to navigate a double life. They share more than just DNA, they take care of the same homes, husbands, and even a child until their meticulously crafted rouse comes crashing down.

The series spans just seven episodes, but can this show about twins double its episode count? It’s hard to say, mainly because its ambiguous ending leaves plenty of room for a Season 2. Let’s break down the Season 1 finale to find out what it could mean for the show’s future.

Is Gina Still Alive In Echoes?

The finale of Echoes begins in the wake of a massive fire. Gina and Leni are at odds about their future, arguing inside a quickly burning house. Leni informs Gina that their dad is dead before snatching an ax and chasing Gina. The ax-wielding twin attempts to corner Gina upstairs while suffering hallucinations of their dad and sick mother. It’s enough to slow Leni down and allow Gina to escape. The episode then transitions into a flashback where a young Leni burns down a church while Gina and her boyfriend, Dylan, are having sex.

The scene cuts back to the present, where Leni chases Gina, attacking her in a river and nearly drowning her, just as their dad did to their mother. It’s here where the truth comes out: Leni explains that she’d only been trying to protect Gina from their murderous father all these years. Still, they discovered that their parents had planned a ceremonial death for their mother, who was too sick and in pain to continue living. The reveal stings even worse because their mother’s “murder” was the impetus for all their switching. Before Leni can reason with her sister, Gina leaps off a waterfall at the river's edge.

Back at the site of the fire, Officer Floss (Karen Robinson) brings a bracelet from the wreckage, unburned and full of charms, to Jack (Matt Bomer), who informs her that the twins used to wear that kind of jewelry as kids. The police then find Leni at the river and question her about Gina, but Leni is evasive. She then returns to one of her homes, where she meets with Charlie (Daniel Sunjata), one of their husbands. Though Charlie admits to playing along with their ruse, he says he loved them both and never judged them.

Later, Leni meets with a lawyer and learns that Floss is building a case against her that could threaten her freedom. Leni then meets with her friend, Officer Paula (Rosanny Zayas), who hands over evidence — a similar charm from a bracelet — that could pin Gina at the scene of the church and house fires that opened the episode. Leni escapes, but before she leaves, she visits her daughter to tell her that she needs to go away for a while. After Floss realizes the trail has gone cold, we see Leni attempting to flee to Australia as a woman named Kira. She makes it through security, but the agent informs her that she saw someone who looked just like her the other day and that she was headed to Kansas.

As the episode closes, we hear a voice-over of Charlie performing a reading from a book he’d written about the twins and their elaborate switching. A woman in the audience asks if they ever found the body, but Charlie informs her that nothing was ever retrieved from the river. Later that evening, Charlie returns home and finds one of the twins waiting in his living room. Unfazed, he pours two drinks and offers one up to the twin. At this point, it’s anyone’s guess whether it’s Gina or Leni, especially since Charlie states that he’ll “figure out” which twin he’s interacting with. Moments before the end, the mystery woman tells Charlie that she has resurfaced to settle scores and wants to start with him.

Will There Be An Echoes Season 2?

The final moments of the season insinuate a lot of unfinished business for Gina or Leni — whoever it may be. However, Netflix bills Echoes as a limited series, which means that the show was not originally intended to be a multi-season show.

Still, there are avenues for Echoes to explore if it is able to extend its run on Netflix. But just because things were left ambiguous doesn’t mean the show is overly interested in tying up those loose ends. Much like those left in the wake of Gina and Leni’s double life, it may be best for viewers to make peace with not fully knowing the truth.

More like this
If 'Entergalactic' Season 2 Happens, You Could Get A New Kid Cudi Album
By Kadin Burnett
Here’s Where You Can Stream 'Schitt's Creek' After The Comedy Leaves Netflix
By Brad Witter
Mike Flanagan Teases 'The Midnight Club' In This Exclusive, Creepy Clip
By Grace Wehniainen
Nicola Coughlan Shared A Lady Whistledown Excerpt From ‘Bridgerton’ Season 3
By Grace Wehniainen, Alyssa Lapid and Sam Ramsden
Get Even More From Bustle — Sign Up For The Newsletter