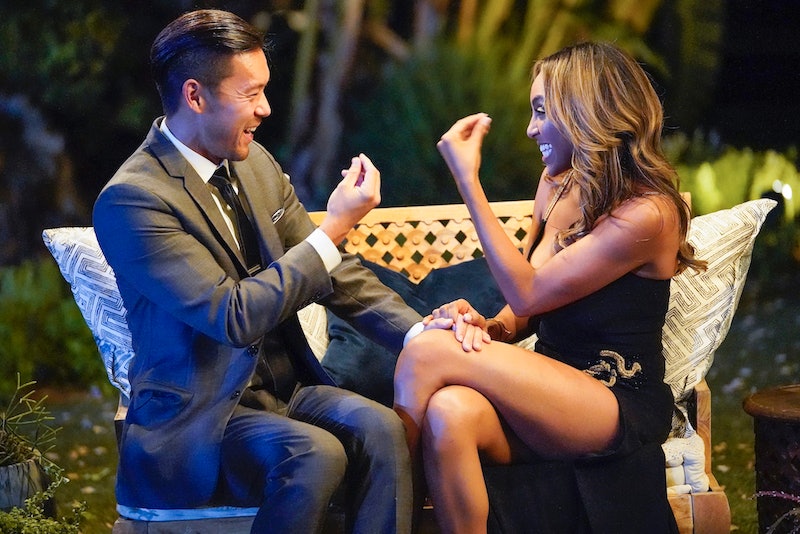 After a particularly tense episode, Joe Park — origami king and notoriously bad trash-talker — did not receive a final rose during last night's episode of The Bachelorette. The New York-based anesthesiologist emerged as a fan favorite this season, and in a post-elimination interview with Entertainment Weekly, Dr. Joe revealed whether he'd be open to appearing on Bachelor in Paradise. His response? Maybe not. He's hoping he won't still be single by then.

Joe's answer came after EW picked his brain about Bachelor Nation calling on him to become the first Asian Bachelor after Matt James' historic season. "The first thought when I saw that was like, 'I know Matt James is the Bachelor now,' and I was like, man, I hope I'm not still single by 2022," he said. "I hope I'm in a committed relationship by then! I appreciate it, don't get me wrong. It's flattering. But it's like, jeeze, I'm not getting any younger."

He continued, "Again, if quarantine has taught us anything, it's that tomorrow's not guaranteed, and you really have to make the most of it now and take advantage of any opportunity that you're given. Joe also added that "there are much better options out there," proving Bachelor Nation's analysis that he is, in fact, much too good for this world.

When asked about a BiP cameo, Joe offered the same response. "I would say the same thing. Though I didn't unfortunately find love on this show, I realized that love is possible from this show," he said. "I think it's something you have to evaluate when [the opportunity] happens. It's hard to say now."

Along with Joe, Chasen, Jordan, and Kenny were sent home at the end of Tuesday's chaotic, yet poignant episode. During a one-on-one, Tayshia and Ivan shared an emotional conversation about racism and police brutality in the wake of George Floyd's death. "Hearing people yelling 'Black Lives Matter,' it hit me more than I realized," Tayshia told Ivan. "Just because those are people in my backyard that I've been trying to prove for so long that I'm the same as them." The episode ended on a tense note after Noah told Tayshia that the contestants were questioning her intentions.

As for the remaining contestants, Joe has some ideas about who Tayshia should end up with. "I mean, I fell in love with Brendan," he told EW, adding that Ivan is a "great, great dude." "Both of those guys are as nice and sweet in person as in the show," Joe continued. "Honestly, those two guys, I pulled for them. Every time they got a rose at the rose ceremony, I smiled. After every rose ceremony, I'd be like, 'All right, my guys made it.'"