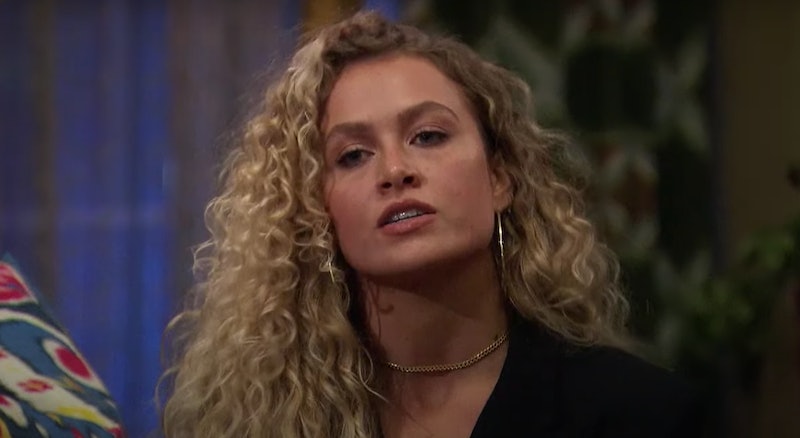 Bullying became a major plot point on Matt James' Bachelor season after five new women arrived a few weeks into the show. Contestant MJ Snyder didn't appreciate the extra competition, calling it a "JV versus Varsity" situation and joining in on ignoring or sometimes mocking the newbies. After Jessenia told Matt that MJ was creating a toxic environment, he sent MJ home. But now, fans are wondering if the show's producers will put Jessenia and MJ on Bachelor in Paradise to reignite their feud.

MJ's final episode seemed to set up a future confrontation. After Matt chose her and Jessenia for a two-on-one date to address the issue, they traded barbs in the lobby while they waited for him to arrive. MJ said that she always preached "harmony and peace" and accused Jessenia of "putting my character into question with Matt" for no reason. Jessenia shot back that MJ "started the term 'JV versus Varsity'" and that she couldn't preach harmony because "you were the leader of the divide in this house."

Matt heard both of sides of the story, but ultimately told MJ that he couldn't give her a rose. "It feels good to be validated," Jessenia said through tears. "MJ had every opportunity to own up to it, but instead she tried to cover her tracks." But MJ saw it differently. Even though viewers saw how she antagonized the newer contestants, she maintained that Jessenia manipulated her as the car pulled away. "I don't know how she did this," she told the camera. "She sabotaged me. That sucks, but Jessenia was petty."

Though it would certainly lead to more drama if both women were to be on Bachelor in Paradise, Jessenia said on the Feb. 16 episode of Bachelor Happy Hour that she's unsure about going on the show. “It’s up in the air right now, to be honest with you," she said. "If I get the call, I’ll really think about it. But I don’t know. Definitely not a ‘Yes, definitely!’ right now.”

Furthermore, fans are divided about whether it would be a good idea to have MJ on Bachelor in Paradise. While some assume that it's inevitable both women will end up on the show, others are hoping the producers don't use Bachelor in Paradise to further condone toxic behavior. "Anyone who verbally bullied or talked down on any other women this season should not be rewarded with a free trip to Bachelor in Paradise," one Twitter user wrote. Another user agreed, adding that it felt like "MJ was auditioning" for the show in the SUV, but they didn't want to see any more of the "immature mean girls" from this season. The Bachelor Diversity Campaign made a similar comment, tweeting that they were "frustrated" with the "mean-spirited" season and how focusing on MJ's maliciousness drew attention away from the women of color's storylines.

Though Bachelor in Paradise didn't air last summer due coronavirus concerns, ABC told Variety on Jan. 13 that they're "very confident" filming will resume this summer. "We are hell-bent on figuring out how we make Paradise work," Rob Mills, senior vice president at ABC Entertainment, said. "Unless something horrendous happens, I feel very confident that Paradise is coming back on this summer — how and where it’s going to be, it’s still too early to tell."