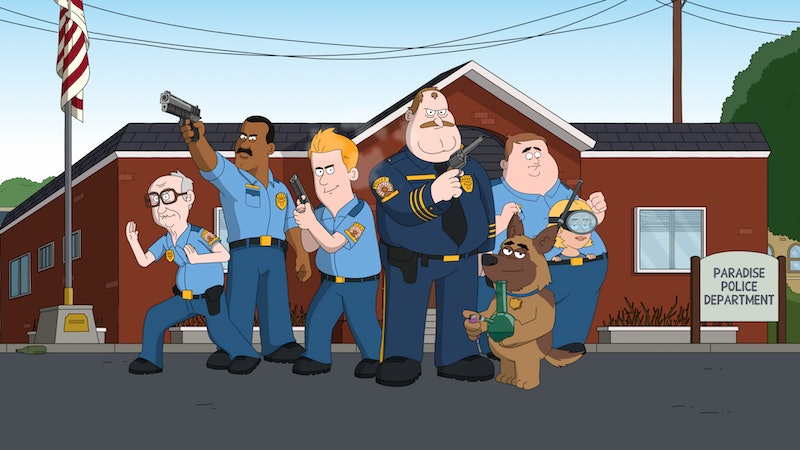 Even Season 2’s nuclear explosion cliffhanger didn’t stop Netflix’s Paradise PD from returning for a third round of raunchy antics on March 12. Whether or not Paradise PD will return for Season 4, however, is anyone’s guess for now. The Netflix Original adult animated comedy series, which follows an inept crew of police officers, does have a loyal fanbase and even brought Brickleberry audiences into the fold in a second-season crossover. Netflix doesn’t typically release viewership numbers though, so there are no ratings to confirm how many households have streamed the show.

Looking at past patterns, Netflix only officially announced Season 3 and released the trailer in February — about a month before its premiere. However, Paradise PD co-creator and writer Waco O’Guin had already shared the renewal news almost a year prior in an April 2020 tweet. So fans might want to keep an eye on social media rather than awaiting the streamer to issue an announcement.

As for a potential premiere date, there was a gap of nearly a year and a half between Seasons 1 and 2. Fans didn’t have to wait as long for Season 3, however, which debuted just over a year later. Should Netflix greenlight a fourth season, it would likely premiere around March 2022. But the date could move up, given the advantage of an animated series that doesn’t face the challenges of in-person filming during the ongoing COVID-19 pandemic.

Regardless of Paradise PD’s future, O’Guin and Roger Black, who also co-created Comedy Central’s Brickleberry, plan to keep small-screen audiences laughing. When asked by Mashable India ahead of Season 3 if they plan to venture into feature films, O’Guin replied: “We love TV and we plan to stick to it. If we ever produced a movie, it would probably be for our friends at Netflix and likely animated.”

After all, Netflix has allowed them to push boundaries of propriety that they aren’t able to on their network Comedy Central series. And they swear it’s not all gratuitous either. “We’re really not trying to offend,” O’Guin added to Mashable. “We’re trying to make people laugh and laugh hard. Naughty or shocking jokes always get the best reactions. It rarely happens but we can tell at our screenings if we’ve pushed something too far and need to pull it back.”

They’ve also made a conscious effort to incorporate the female perspective into Paradise PD, which counts Sarah Chalke (as Gina Jabowski) among its voice cast. According to O’Guin, they hired “two very talented female writers” for Season 2, in addition to employing a crew of several female directors and board artists. “Women are very well-represented on our staff,” he said.

Although fans will have to wait to see how Season 3 pans out for a renewal or cancellation announcement, sometimes no news is good news.