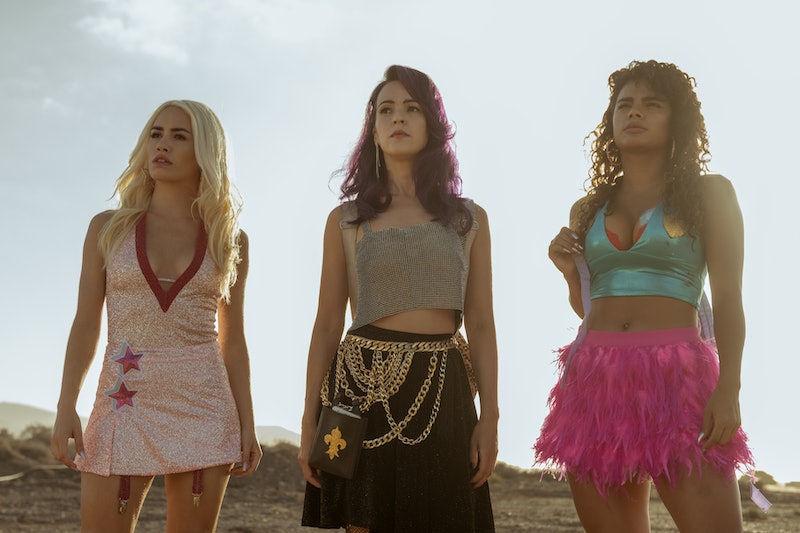 Netflix Spain’s latest buzzy series has arrived on the platform, and it’s already being heralded as the streamer’s “most ambitious series release of 2021,” with a “brightly colored, grindhouse aesthetic.” The eight-episode Sky Rojo series centers around three prostitutes on a madcap spree to freedom as they attempt to flee from their pimp and his right-hand men. The premise is intriguing and exciting enough to keep fans clamoring for more, and before it even hit the streaming platform on March 19, Netflix already prepared to invest more in the saga. Lucky for subscribers hooked by the Spanish crime drama, Sky Rojo Season 2 has been greenlit, according to Variety.

As entertaining as the series is and future seasons may be, Sky Rojo wasn’t as easy to produce as the cast and crew make it look. Filming the series came at a taxing price: Co-creator Esther Martínez Lobato told Variety that producing the series was challenging due to it addressing human sex trafficking. She explained, “Of course, the series is playful, and there is a lot of beauty aesthetically and in the story of our three protagonists [Coral, Wendy, Gina], but wading through the dark reality was difficult.” Speaking of how future seasons could differ from the first, she added, “I suppose with our next project, we’ll look to do something pure and cleaner. Something we can approach with a new perspective.”

Along with Sky Rojo’s heavy content, Martínez Lobato also recalled the disadvantages of crafting short 25-minute episodes for Season 1. “At first, we expected it to be easier to produce, but during production, we realized that was completely wrong,” she revealed. “The days are incredibly long, and the costs were almost the same shooting a 30-minute episode as they were when we were doing 50 minutes.”

Still, the series’ co-creator and Martínez’s Money Heist collaborator Álex Pina praised the shorter episodic format as it proved to be more “adaptable” for their writing styles. He also noted the importance of working with a diverse range of actors and the opportunity to share Sky Rojo with a global audience, regardless of the language viewers speak. “With Netflix, the series will be available all around the world, and we wanted the 400 million Spanish speakers in the world to feel represented,” Pina told Variety.

Sky Rojo is coming back for a second season, but there’s no word on pre-production matters or its release date. In the meantime, one of the show’s actors appears to be keeping busy with new projects. Spanish actor and singer Asier Etxeandia, who plays the dastardly pimp, Romeo, appears to already have two gigs lined up — a role as “Inquisidor” for onscreen biography Teresa and another role in a TV musical series titled Erase una vez... Pero ya no.

Sky Rojo stars Wendy (Lali Esposito), Gina (Yany Prado), and Coral (Veronica Sanchez) currently do not appear to have any post-Sky Rojo film or TV projects in the works. However, Esposito is also a mega-popular recording artist and dancer with over eight million followers on Instagram. Her recent nomination for a Latin American Music Award in the Social Artist of the Year category should keep her in great stead as she awaits feedback on Sky Rojo and Season 2 production news.

It sounds like Sky Rojo and its stars and creators are ushering in a new wave of riveting content poised to push Netflix users into another weekend binge.

More like this
Devi Is Going To Meet A “Smoldering Bad Boy” In ‘Never Have I Ever’ Season 4
By Jack Irvin and Gabrielle Bondi
The First Clip From Netflix’s Queen Charlotte ‘Bridgerton’ Prequel
By Bustle Editors
Mike Flanagan Teases 'The Midnight Club' In This Exclusive, Creepy Clip
By Grace Wehniainen
Ed McVey Shares A Surprising Connection With Eddie Redmayne
By Catharina Cheung
Get Even More From Bustle — Sign Up For The Newsletter