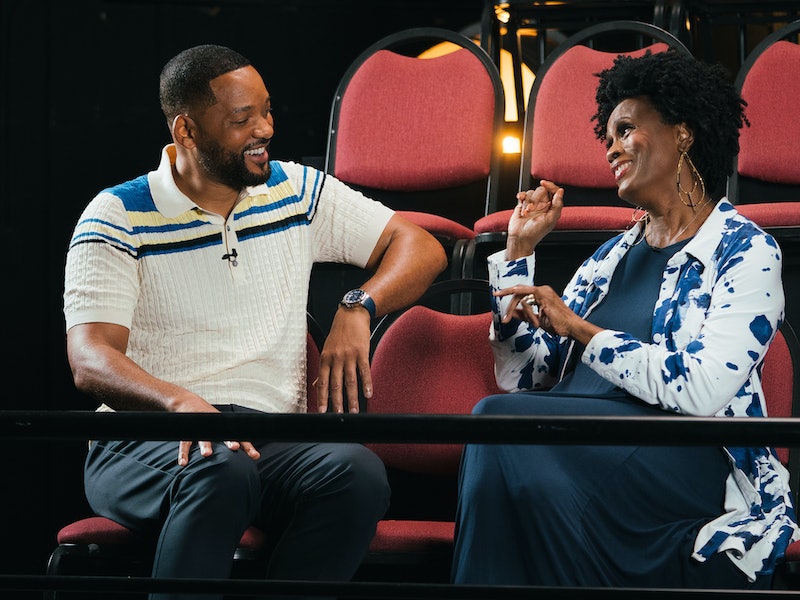 The Banks' are one big, happy family again. After nearly three decades of bad blood, Will Smith and Janet Hubert ended their feud during the Fresh Prince reunion, which premiered on HBO Max on Nov. 19. Hubert played Aunt Viv on the first three seasons of the iconic sitcom before the role was mysteriously recast with Daphne Maxwell Reid in 1993, who played the character until the show's end.

At the time, the casting change was chalked up to creative differences, but both Hubert and Smith have shared their sides of the story — along with many negative comments about one another — with the press over the years. During the reunion, however, the pair sat down to bury the hatchet, and Smith admitted that he didn't actually know how Hubert's departure really went down. "There was some friction [between Will and I] because I was pregnant," the actor explained, noting that in addition to expecting her third child, she was in an abusive relationship.

"Home life was not good at all," she continued. "I was no longer laughing, smiling, joking because there were things going on that nobody knew about." The breaking point came when Hubert was offered what she described as a "really bad deal" during contract negotiations, which she felt she couldn't accept. "My salary was cut. I had a new baby and a husband who was out of work. So I said no," she said before refuting reports that she had been fired. "I did not accept their offer. I was never fired. [But] the misconception was always put there."

Smith admitted that he didn't know what was going on with Hubert, and he took full responsibility for the role he played in making his co-star feel unwelcome on the Fresh Prince set. "During that time of her pregnancy, I wasn't sensitive. I wasn't perceptive," he said of his younger self. "Now that I've had three kids, I've learned some things that I did not know at the time and I would do things very differently. I can see where I made the set very difficult for Janet."

While Hubert admitted that she was "deeply hurt" when she was told that the role of Aunt Viv would be recast, what really devastated her was the fact that Smith spoke negatively about her to the press after her departure. "I had been banished. And they said it was you who banished me," she explained, adding that it was difficult for her to land another role after her reputation had been tarnished by Smith's comments. "Calling a Black woman 'difficult' in Hollywood is the kiss of death. It's the kiss of death. And it's hard enough being a dark-skinned Black woman in this business."

In response, Smith apologized and explained that when he was 21, "everything was a threat to me," and so he felt the need to fight back against Hubert's allegations in whatever way he could. "I was so driven by fear and jokes and comedy and all of that. [Now I] can see now the level of pain and the level of struggle that it was for you to show up every day." And in hindsight, Smith realized how important it was to hash everything out with Hubert and put their differences behind them.

"I could not do a 30-year celebration of this show and not celebrate you, celebrate your contribution and celebrate your contribution to my life," Smith explained. "The person I want to be is someone who protects you, not someone who unleashes dark on you." Despite everything the two have said about each other over the years, it seems like Will and Aunt Viv are ready to embrace each other once more. After all, there's no bond like that of a (fictional) family.

More like this
Netflix Reveals First Look At Wednesday In The 'Addams Family' Spinoff Series
By Bustle Editors
The 'Skins' Cast Shared The Reunion We’ve Been Waiting For
By Sophie McEvoy
A New 'And Just Like That' Table Read Pic Confirms A Key Character's Return
By Jack Irvin and Grace Wehniainen
24 Years Ago, 'Friends' Dropped Its Most Underrated Ross & Rachel Episode
By Grace Wehniainen
Get Even More From Bustle — Sign Up For The Newsletter