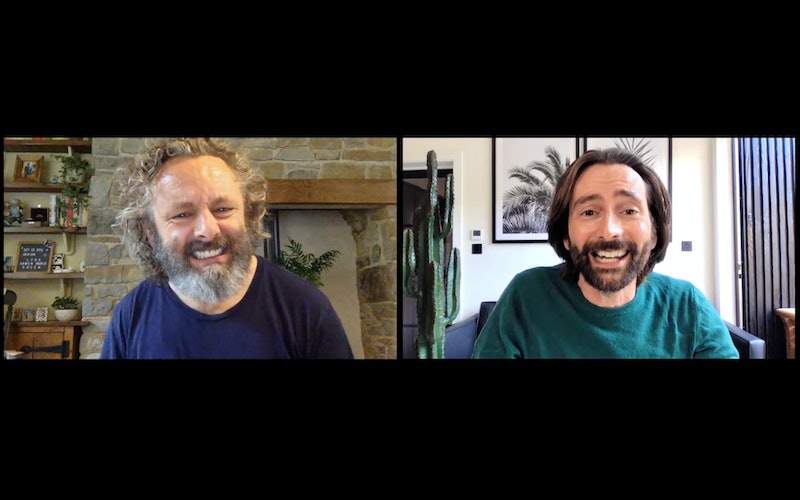 Throughout lockdown, David Tennant and Michael Sheen have been uplifting viewers with their delightfully meta and downright hilarious series Staged. But as the show is rooted around the pandemic and the UK will soon be coming out of its third lockdown, will Staged return for season 3?

At the time of writing (March 16), there’s been no official word on whether Tennant and Sheen will be re-zoomifying our TV screens any time soon.

However, while the show many not have been officially renewed by the BBC, Staged creator Simon Evans told the Radio Times he was write it “in a heartbeat” should the opportunity arise.

He added: “If there was the opportunity to do a special if the right idea came along, to make more if the context were right, then that would be lovely,” but he was also wary of the show losing its credibility. “I’ve seen enough things try to outstay their welcome, so the last thing I would want to do is to damage what I’m really proud [of]... so I wouldn’t want to risk that.”

Speaking to the Radio Times about a “theoretical seaosn three,” Evans said, “Certainly if we were to do more Staged, it would probably have to up the ante again, because people will be expecting something now. So we’d have to surprise everybody. Whether or not there is [a third season], I think I’d need a bit of time to work out what [the twist] could be.”

Speaking about the popularity of the first season, Sheen told the BBC: “We didn’t take ourselves too seriously and made fun of ourselves – I think people enjoyed that.”

He added: “Having to do calls on Zoom and all that kind of stuff, we’ve been able to tap into what’s funny and absurd about that as well.”

Tennant said, “People seemed to recognise what the characters were going through. Not the specifics of being an actor in lockdown as such, but the sense of helplessness, the frustrations and occasional joys of being stuck at home while the world trundled on.

“That and the fact that Simon wrote a really funny script. I mean, without that we’d have been stuffed.”