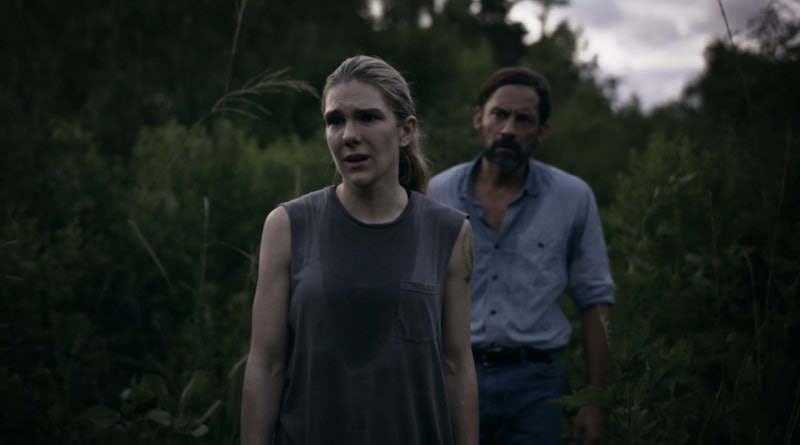 Out Feb. 19, the new Amazon Prime thriller Tell Me Your Secrets follows a trio of characters grappling with trauma and grief in a variety of different ways while trying to find answers to the mysteries in their lives. With complicated characters and numerous secrets, it seems to have all the ingredients that could make an addictive series. Yet the question remains: Will Tell Me Your Secrets return for Season 2?

The show starts with Karen (Lily Rabe) — the former girlfriend of a serial killer who enters the witness protection program under the name Emma — being hunted by Mary (Amy Brenneman). She believes Karen knows something about her missing daughter and hires John (Hamish Linklater), a seemingly reformed sexual predator, to track Karen down. Although the episodes center on the mystery of Mary's missing daughter, that's far from the only secret it unearths.

As of right now, Tell Me Your Secrets hasn't yet been renewed for a second season, but there's hope — and it certainly can't hurt that Rabe's recent HBO series The Undoing was such a success. In an interview with Forbes, she hinted that the Amazon series, which was created and written by Call the Midwife writer Harriet Warner, had deliberately left open the possibility of a second season. “Something that I loved about the first season story of Tell Me Your Secrets was that it has a beginning, middle, and end, but there is also room for more and lots of ways that can be done,” Rabe said. “That is something that Harriet expressed very specifically to me when we initially talked about it, so hopefully, that will happen.”

Both the star and the creator of Tell Me Your Secrets are enthusiastic about a Season 2, which is promising news for all the fans who can't get enough of the convoluted lies and mysteries littered across Tell Me Your Secrets. Of course, Amazon has to get behind the plan, too, so hopefully viewership will do any necessary convincing.