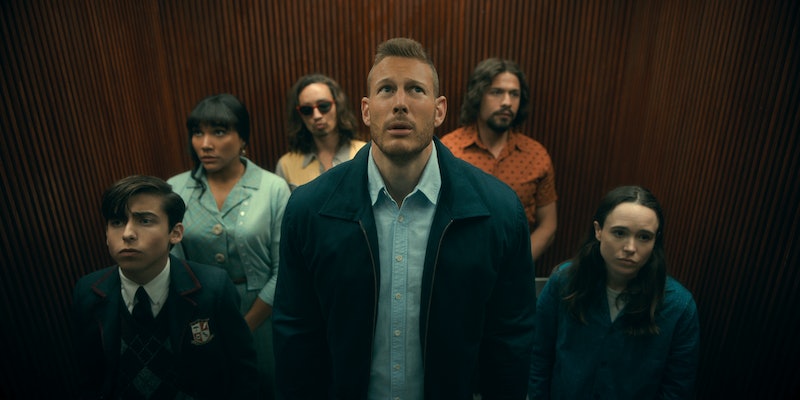 On Tuesday, Nov. 10, Netflix announced The Umbrella Academy is officially renewed for Season 3. Few details have been revealed about what the season will entail, but there are a few guesses to be made about what's ahead based on the comics the show is based on.

In The Umbrella Academy Volume 3, Hotel Oblivion, the Hargreeves siblings discover that, before his death, their father created an off-world prison to house his enemies called Hotel Oblivion. After being set free by a man named Mr. Perseus, the villains (including the team's biggest nemesis, Dr. Terminal) are unleashed on Earth and begin wreaking havoc on the Umbrella Academy as well as the world at large. But just when the siblings think all hope is lost, a new group of heroes arrive to save the day. They too wear special costumes and possess supernatural abilities, making it likely that they're among the other 36 gifted babies who were born on Oct. 1, 1989.

The show seems to be angling toward this with the reveal of the Sparrow Academy — and a still-alive Ben — in the Season 2 cliffhanger. The new group of heroes appear to be antagonists more than allies, but perhaps they'll be able come together against a common enemy.

Whatever the case, Umbrella Academy should be around for many seasons to come. A fourth volume of the comics is currently in development, and creator Gerard Way told Collider in 2019 that he plans to write eight volumes of the Umbrella Academy comics in total.

“What I did for Steve Blackman and the writers in that first writer's room was to create an 18-page document that laid everything out. Even of the graphic novels that haven’t come out yet, which should equal eight when we’re all done,” Way explained. “So I gave them the blueprint for what happens, because you do want to seed certain things in there for future series and the hope is that it’s a success so that you do a lot more of these.”

A premiere date for Umbrella Academy Season 3 has not yet been announced.

More like this
Here’s Why Danny Masterson’s Hyde Isn’t In 'That '90s Show'
By Brad Witter
Everything To Know About A Potential 'Lockwood & Co.' Season 2
By Gretchen Smail
Everything To Know About 'Cobra Kai' Season 6
By Brad Witter
'The Crown' Season 6 Has Suspended Filming "Out Of Respect" For The Queen's Death
By Bustle Staff
Get Even More From Bustle — Sign Up For The Newsletter
From hair trends to relationship advice, our daily newsletter has everything you need to sound like a person who’s on TikTok, even if you aren’t.

This article was originally published on July 31, 2020