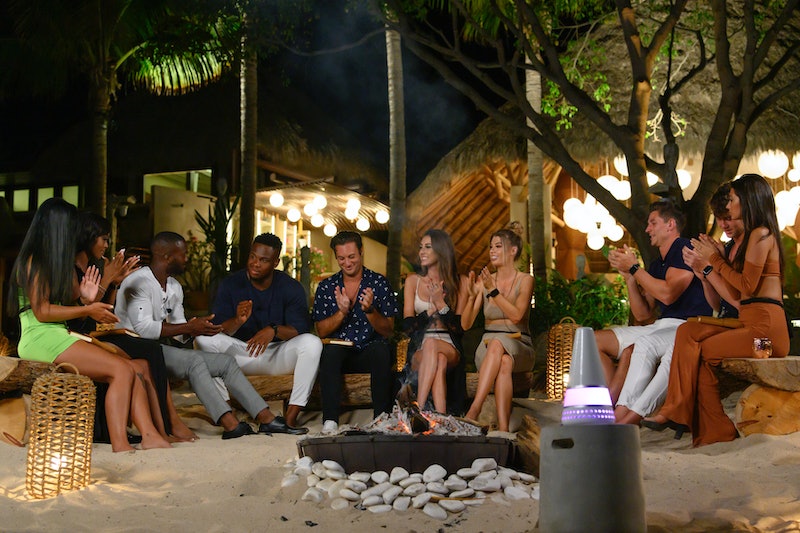 Update: After renewing Too Hot to Handle for Seasons 2 and 3 in January, Netflix has announced that Season 2 will premiere in June and will run weekly on Wednesdays.

Earlier: Too Hot to Handle has a bonkers premise, a quirky virtual assistant, and an incredibly attractive cast, so it's no surprise that it's become one of Netflix's most-watched shows in just one weekend. But if Too Hot to Handle returns for Season 2 (which seems likely, given its popularity), it may want to make one change that majorly upset some viewers: the ending.

In the final episode, Lana reminds the contestants that most of them have done a horrendous job of following her no-touching rules. Francesca and Harry are the worst offenders, having caused $32,000 to be deducted from the original $100,000 pot, so Lana gives them an ultimatum: they can win back $43,000 for everyone... if they can manage to spend one night in the private suite together without making any physical contact.

Understandably, their fellow contestants have zero faith in them, but somehow Harry and Francesca manage to keep their hands to themselves. This brings the group total back up to $75,000. Madison and Kori get sent home, and then Lana reveals the winners: Francesca and Harry, and then Sharron and Rhonda. "You four have shown great strength and growth by forming emotional connections," Lana informs them.

But then she asks David, Chloe, Kelz, Nicole, Lydia, and Bryce to stand as well. What?

"Each of you has embraced the process and helped one another to form deeper connections," Lana tells all 10 finalists, and reveals that they each get to take home $7,500. Yep, everyone ends up being a winner, regardless of whether they followed the rules or spectacularly disregarded them. Lana's message may have been about "learned lessons in maturity" and valuing the importance of deeper emotional connections, but for many viewers, the ending was a frustrating indication that her rules didn't actually matter at all. Sure, reality TV is meant to be fun, but people want to see actual stakes on game shows.

"Too Hot to Handle ending was pure pants," wrote one Twitter user. Another user agreed: "Imagine being Kelz or Nicole and sticking to the game rules 100% & being a good team player but still ending up taking away equal amount to the crackers who did the dirt and lost the team so much money." Others tweeted that they enjoyed Too Hot to Handle, but the finale totally turned them off to a potential Season 2.

Regardless of the ending, Too Hot to Handle's high viewership means it will likely get a second season. And if it follows in the steps of Love is Blind and The Circle, Netflix will probably announce the renewal news in about a month. If the producers want a third season, however, they may want to reconsider how Lana decides the winner.

This article was originally published on April 20, 2020