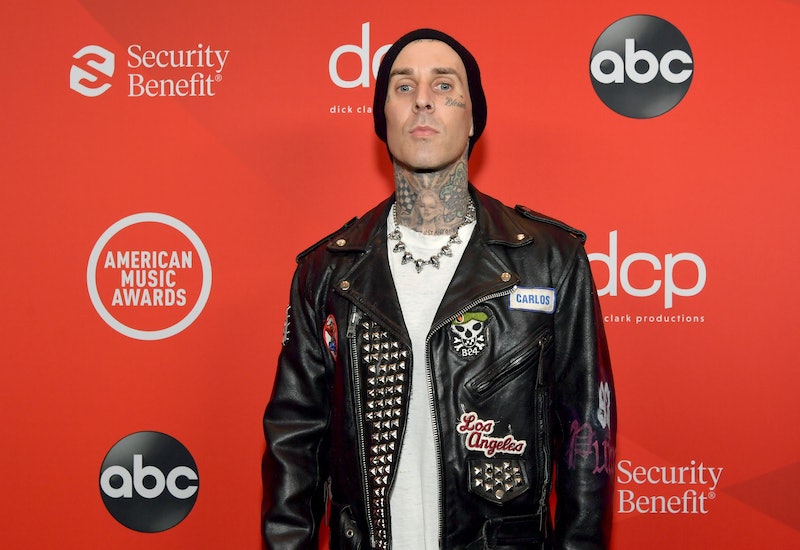 Kourtney Kardashian may now be Instagram official with Travis Barker, but that doesn’t necessarily mean that the Blink-182 drummer will be on Keeping Up With the Kardashians in its final season. The show wrapped filming in early January, which was reportedly only about a month or so into their courtship. The end of filming also came six weeks before the duo went public — so while the cameras were rolling, Kardashian may not have been very open about it.

In recent seasons, Kardashian has been very private about her dating life while filming the show, even refusing to say Younes Bendjima’s name on camera during their relationship a few years ago. Eventually Bendjima did make an appearance in a KUWTK episode, but it was well into their courtship. This romance with Barker may just be too new for Kardashian to have talked about him or shown him in the last few episodes — especially since she previously said being so open about her relationship with ex Scott Disick wasn’t always the best thing for their romantic life.

“I shared everything from my relationship with Scott — everything — to where all these people were involved in my relationship and it was horrible for our relationship,” Kardashian said in a 2019 episode. She probably wouldn’t have wanted to make that mistake again with Barker.

Speaking of Disick, the trailer for the final KUWTK season teases some potential renewed chemistry between him and the oldest Kardashian sister. “I saw Kourtney and Scott asleep together on the couch,” Kim Kardashian says in one clip.

“They’re definitely made for each other. Like, they’re supposed to be together,” Kendall Jenner adds, as the trailer shows clip of Kourtney and Disick hugging.

However, the focus on the duo being “made for each other” seems misplaced, since we know in real time that Kourtney and Barker are quite happy together. He said during a recent interview on The Drew Barrymore Show that he and Kourtney were a good fit because they were both parents and they’d forged a relationship as friends first.

Longtime KUWTK fans may remember that Barker has actually made an appearance on the show in the past — that time just as Kourtney’s friend and neighbor. “His kids and my kids are really good friends,” she said in Season 13, Episode 8. Now the two have gone from playdate pals to dating. And while the early days of their romance could potentially be hinted about on KUWTK, with as private as Kourtney’s been in recent seasons, don’t expect to see Barker too much — if at all.