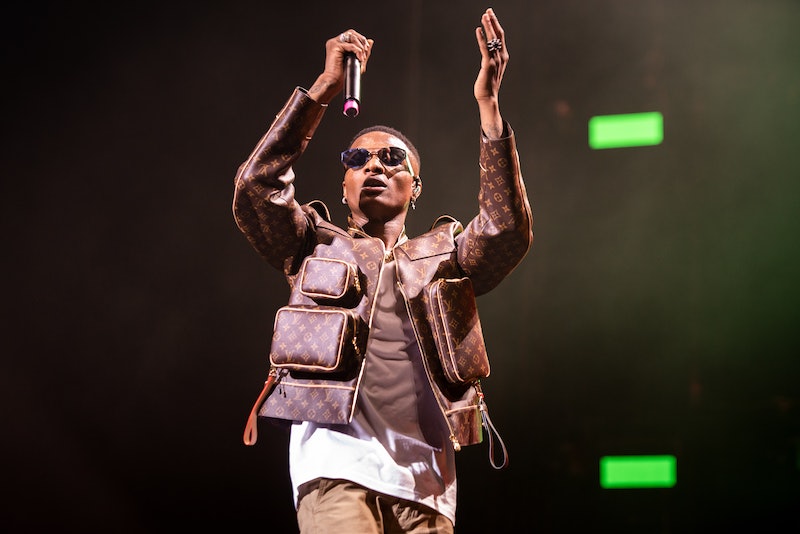 When Wizkid’s Made In Lagos O2 shows sold out within a record-breaking 12 minutes, it’s safe to say that many of the Nigerian superstar’s die-hard fans were disappointed to not bag a ticket. The “Essence” singer is is performing for four consecutive nights at the London venue, having started on Sunday Nov. 28. On Monday, it was reported that a number of ticketless fans had “stormed the arena” in a desperate bid to see the show. The crowd was quickly contained but it just goes to show how popular Wizkid is right now. With this in mind, I’ve done some digging into when and where UK fans can next see the rapper perform live.

Sadly, UK fans may have to wait some time before Wizkid announces more arena dates (sorry to be the one to break it to you). After his final O2 Arena performance on Wednesday, December 1, Wizkid is due to bring the Made In Lagos tour to Canada and later in 2022 he’ll be heading to Puerto Rico and Portugal.

There is hope, however, because the Grammy winner is planning an outdoor performance in London in the summer of 2022. Tickets and an official date are yet to be released so your best bet is to sign up to the performer’s newsletter for all the latest info.

Going by the hundreds of videos posted on social media after his O2 shows, it seems Wizkid’s Made In Lagos performances were more than worth the hassle of buying tickets. One person tweeted on Nov. 29, “This is the best concert of my life.”

Among the 20,000 people in attendance at the O2 Arena were a few celebrity fans including Gabrielle Union, Stormzy, and Leomie Anderson. Wizkid also had surprise guest performances from Skepta and singers Tems and Ella Mai, who feature on Wizkid’s newly released album.

Chris Brown was also brought out on the opening night – the first time he had performed in the UK for ten years. Brown was banned from entering the country in 2010 after he was arrested the year prior for assaulting his then-girlfriend Rihanna. In his review of the show, the Guardian’s Jason Okundaye wrote that Brown’s inclusion left “an unavoidable stain on the joy that came before.”

For fans of Wizkid, whose hit “Essense” topped UK charts earlier this year, the O2 arena shows were years in the making. As one fan tweeted, “What a joy to attend Wizkid tonight! His music has soundtracked my life since I was 18 (I’m nearly 30).”

They added: “From watching him perform at my uni nightclub to selling out the 02, and he had thousands singing YORUBA back at him. Lord knows I love my culture! What a GOAT”

While another supporter shared: “Just look at what Wizkid is doing!! Not only for the culture but for our Artists as well. This is a big Win for all of us!! Everyone of us!!! This Greatness can only be celebrated! I am so inspired!!!!”

As one of Africa’s most successful artists, Wizkid has enjoyed a decade-long career and international acclaim following his feature on Drake’s single “One Dance” in 2015.